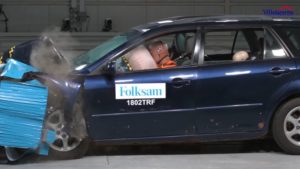 Thatcham research found that a rusted-out Mazda6 performed worse on Euro NCAP testing than a new Mazda6, but the rust appeared to be less to blame than would have been expected.

The British counterpart of the Insurance Institute for Highway Safety examined a 2003-08 generation Mazda6 and 2004-08 generation Volkswagen Golf on behalf of Villaägarnas Riksförbund (Swedish Homeowners Association) and the insurer Folksam. Villaägarnas made the results public April 10.

The Golf fell from a “weak five” (33 points) on EuroNCAP’s five-star crash rating to a “strong four” (32 points), according to Villaägarnas. (Editor’s note: All Villaägarnas comments here were derived from a questionable Google translation of the original Swedish.)

Villaägarnas in a news release called that difference in crash protection “marginal,” which would seem debatable from the perspective of an insurer or consumer. However, it also pointed out that the Golf and Mazda6 were tested apples-to-apples with the EuroNCAP methodology from more than a decade ago.

“We have allowed the collision laboratory Thatcham to test the cars according to the same standard EuroNCAP used when these models of Volkswagen Golf and Mazda 6 were tested as new,” Villaägarnas Chief Legal Officer Ulf Stenberg said in a statement. “So they have not been judged according to any later and tougher standards.”

Because the difference was so small, the association didn’t release a Thatcham report on the Golf testing.

However, the rusted-out Mazda6 certainly saw “significantly impaired” crash safety, falling from a “weak four” (26 points) to a “weak three” (18 points), according to Villaägarnas.

“According to Folksam, for Mazda 6 this is 20 per cent higher risk of being killed in a real accident,” the association wrote.

Thatcham felt the rust had something to do with this plunge, though the report is full of examples of corroded areas seeming to perform as intended.

“It is the opinion of the author that the corrosion of the vehicles did negatively affect the safety performance of these tests,” Thatcham crash engineer Tom Leggett wrote in the Mazda6 report. “However, the extent of this negative affect is not as severe as expected. Without modifiers, the scores between the 2003 and 2018 tests are very comparable, and only after the application of modifiers do the results begin to differ. Without a much deeper analysis of the structure of the crashed vehicles, would you be able to confidently comment upon the affect of the corrosion onto the crash performance of the structure of the vehicle.”

The test Mazda6 scored 7.289 on an offset deformable barrier crash, which appears to be nearly if not entirely identical to the Insurance Institute for Highway Safety’s 40 percent, 40 mph moderate-overlap crash test. The Mazda6 tested back in 2003 scored an 11.

As Leggett wrote, the rusty Mazda6 initially appeared to merit a better score on the moderate-overlap crash test than the car tested in 2003, rating a 12.289. Thatcham applied a series of -1 modifiers to the data based on the conditions noted during the front- and side-impact crashes, and Leggett noted that some of these tweaks might have been applied in 2003, but without the full EuroNCAP data, there was no way to tell.

Still, Leggett indicated that the experimental vehicle probably would be down at least -2 over the original — including -1 for the dummy’s head banging into the steering wheel.

The ODB test was relatively comparable to the 2003 tests until the modifiers were applied during the inspection. The head bottoming out the airbag, the body shell integrity and footwell rupture modifiers are the most crucial, as they are the most likely to be affected by a defect in the structure of the vehicle. The variable loading and concentrated loading modifiers were likely to have been applied to the original tests as are they are an innate design feature of the vehicle facia, although a high amount of deformation of the footwell would intensify these issues. The head bottoming out the airbag was almost certainly not seen in the original test, and implies that some structure was not able to transfer loads effect during the impact, causing interaction between the steering wheel and the dummy.

He also seemed to suggest that compromised body shell integrity might not have occurred in the 2003 test, as the report makes no mention of a similar outcome back then.

“From the severe A pillar and Sill buckling, it can be said with high certainty that the structure of the vehicle would NOT be able to sustain any increased loading,” Leggett wrote about the bodyshell integrity modifer.

The side-impact crash saw a clear difference in the 2003 and 2018 tests, with the Mazda6 dummy in the rustmobile receiving a 9.520 compared to the 13 scored in a new vehicle. Thatcham also applied a -1.187 modifier for “abnormal loading” detected in the backplate of the dummy, and Leggett said an unspecified number of points were probably deducted in 2003 as well.

“However, the large compression of the ribs does indicate that the sill and footwell of the vehicle deformed in such a way to cause greater loading onto the dummy,” Leggett wrote.

It’s amazing that such a rustbox as the experimental Mazda 6 held up as well as it did. As noted before, Leggett’s report includes an example of a spot weld remaining intact despite being caked with rust and a porous sill apparently still transferring energy like it was supposed to.

“Once again the level of corrosion is evident, with holes in the metal clearly visible,” Leggett wrote of the driver-side sill. “This is one of the highest loading points of the ODB impact, and so any structural weakness should be visible here. From Figure 9, the sill structure has not entirely collapsed, despite the extensive rust and the high load put through it. The high-speed video suggests that the loads were completed transferred through this section, with no energy absorption taking place. This then caused the deformation further rearwards of the vehicle. It is difficult to determine whether this is part of the original crash structure of the vehicle.”

The moral in the Thatcham report is twofold for collision repairers and insurers. First, pay attention to that corrosion protection or risk compromising a customer’s safety.

Second, be aware of how small aspects of structural work — say, a shop weakening an higher-strength steel area with heat or a bad weld — can compromise the vehicle in a subsequent crash.

For example, Leggett describes a situation where a chassis leg “severely covered by rust” doesn’t fail — but spot welds do.

“Once these spot welds failed, the floor section was able to greatly deform into the passenger compartment,” he wrote.

Thatcham research found that a rusted-out Mazda6 performed worse on Euro NCAP testing than a new Mazda6, but the rust appeared to be less to blame than would have been expected. (Screenshot from Villaägarnas Riksförbund video on YouTube)

A rusted area on a Mazda6 did not fail during a crash test; instead, a spot weld did. (Thatcham photo provided by Villaägarnas Riksförbund)

A rust-caked Mazda6 sill transferred energy like it was supposed to during a crash test, according to Thatcham. (Thatcham photo provided by Villaägarnas Riksförbund)