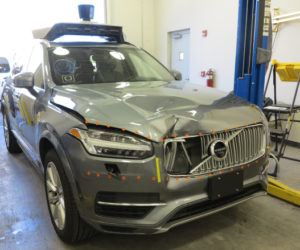 The safety agency also wrote that the modified Volvo XC90’s backup driver — memorably seen looking away from the road just prior to the crash — told investigators she had been monitoring an Uber testing interface in the center stack of the dash. She said she had not been using either of her business or personal cellphones — except after the crash to call 911 — and Tempe police reported no signs that she was impaired by drugs or alcohol.

“According to Uber, the developmental self-driving system relies on an attentive operator to intervene if the system fails to perform appropriately during testing,” the NTSB wrote. “In addition, the operator is responsible for monitoring diagnostic messages that appear on an interface in the center stack of the vehicle dash and tagging events of interest for subsequent review.”

Uber’s design of its self-driving car raises questions about the wisdom of having its backup drivers multitask to watch both the road and the dash interface. Particularly since, according to the NTSB, the ride-sharing company removed the vehicle’s ability to stop itself and failed to install a method of having the XC90 alert the driver a crash might be imminent. Uber also disabled at least some of Volvo’s own ADAS systems, the NTSB said.

“The vehicle was factory equipped with several advanced driver assistance functions by Volvo Cars, the original manufacturer,” the NTSB wrote. “The systems included a collision avoidance function with automatic emergency braking, known as City Safety, as well as functions for detecting driver alertness and road sign information. All these Volvo functions are disabled when the test vehicle is operated in computer control but are operational when the vehicle is operated in manual control. …

“According to data obtained from the self-driving system, the system first registered radar and LIDAR observations of the pedestrian about 6 seconds before impact, when the vehicle was traveling at 43 mph,” the NTSB wrote. “As the vehicle and pedestrian paths converged, the self-driving system software classified the pedestrian as an unknown object, as a vehicle, and then as a bicycle with varying expectations of future travel path. At 1.3 seconds before impact, the self-driving system determined that an emergency braking maneuver was needed to mitigate a collision (see figure 2).[2]  According to Uber, emergency braking maneuvers are not enabled while the vehicle is under computer control, to reduce the potential for erratic vehicle behavior. The vehicle operator is relied on to intervene and take action. The system is not designed to alert the operator.”

Elaine Herzberg, 49, was struck while walking a bicycle across the Tempe, Ariz., road perpendicular to the vehicle. She died at a local hospital.

The nearest crosswalk was 360 feet away, according to the NTSB. The NTSB will continue to examine the self-driving car interface, Uber’s autonomous system and the driver’s cellphones.

“Over the course of the last two months, we’ve worked closely with the NTSB. As their investigation continues, we’ve initiated our own safety review of our self-driving vehicles program,” an Uber spokesperson said in a statement. “We’ve also brought on former NTSB Chair Christopher Hart to advise us on our overall safety culture, and we look forward to sharing more on the changes we’ll make in the coming weeks.” The lesson for auto body shops here is twofold.

First, a single piece of ADAS you fail to deliver in pre-loss condition back to what might be an increasingly distracted vehicle owner could be the difference between life and death.

Second, we’d direct readers again to the depth of the NTSB investigation. In this case, it’s an experimental vehicle, not something a shop is likely to have repaired. But the agency also scrutinizes crashes of the partially autonomous vehicles sold on the open market today. This means you might well have the feds checking your work someday. As the NTSB wrote about the high-profile Florida 2016 Tesla crash:

Investigators examined the major mechanical systems on the car, which included the powertrain, steering, braking, and suspension systems. They identified no anomalies within the major vehicle systems.

In this vein, while the NTSB doesn’t appear to be checking to see what happened when a car equipped with a more “mundane” technology like autobraking crashes, a shop might still face similar scrutiny from a plaintiff’s attorney.

National Transportation Safety Board, May 24, 2018

The National Transportation Safety Board on May 24, 2018, of a self-driving test Uber XC90 that struck and killed a pedestrian in Tempe, Ariz. (Provided by NTSB)

The National Transportation Safety Board on May 24, 2018, released this image related to its investigation of a Tempe, Ariz., self-driving test Uber Volvo XC90 crash. The diagram shows the location of the crash on Mill Avenue. (Provided by NTSB)

The National Transportation Safety Board on May 24, 2018, released this image related to its investigation of a Tempe, Ariz., self-driving test Uber XC90. “View of the self-driving system data playback at about 1.3 seconds before impact, when the system determined an emergency braking maneuver would be needed to mitigate a collision,” the NTSB wrote.” Yellow bands are shown in meters ahead. Orange lines show the center of mapped travel lanes. The purple shaded area shows the path the vehicle traveled, with the green line showing the center of that path.” (Provided by NTSB)