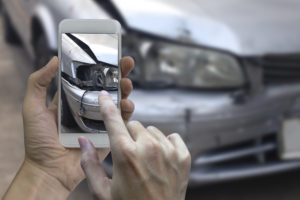 Collision repairers’ hackles rise at the notion of photo estimating, but a similar concept can be harnessed to a shop’s benefit, Body Shop Booster CEO Ryan Taylor told a webinar audience Thursday.

Insurers were producing bad estimates off photos for vehicles in the 12- to 28-repair-hour range, and “just ugly” ones for cars with even more damage, Taylor agreed. He and co-host Dave Luehr (Dave Luehr’s Elite Body Shop Academy) also mocked an Esurance ad in which a “control enthusiast” snaps photos of his damaged car, pockets $1,300, and walks off with an attractive blonde. The damage shown in the ad was clearly more like $3,000-$4,000, Taylor said.

But shops should still use a variation on photo estimating to improve efficiency and the customer experience, Taylor said.

Using it for triage delivers “massive benefits,” he said.

By having customers submit photos (with an app walking them through how to take proper ones) rather than schedule or drop in for an estimate, a shop can eliminate 15-20 percent of the “profit losers” that’d waste administrative staff time with a physical visit, Taylor said.

Cash-out, total-loss, rust, restoration, and tire-kicker work can be caught and dispensed with quickly, according to Taylor.

The remainder of the work is worth a shop’s time. For Type 1 damage — which Taylor classified as requiring below 12 hours of work — “people can write really tight estimates” based off of photos, he argued. (Presumably, these estimates would be prepopulated with do-on-every-repair and CYA items like scanning, measuring and calibration and not limited to the visible damage.)

For Type 2 and Type 3 damage, where insurance is “getting hammered” with bad photo estimates, the shop won’t write the estimate off the app photos, according to Taylor. But they can take control of the process with them.

Explain you started the estimate — checking a box in the customer’s mind and helping to capture keys — and you can tell from the images that there’s going to be hidden damage, Taylor said. Schedule them for a teardown and blueprinting estimate and help close the deal by inquiring if they need a rental car.

The vehicle owner only has to make two visits to your shop rather than three, thanks to the app — a customer-pleasing time-saver, according to Taylor, whose company sells such software. Luehr said he was excited by this idea. A 10-minute curb-written estimate is “not effective,” he said. Some shops were reaching almost a 1:1 administration-to-technician ratio because of inefficiencies in the system, and administrative “waste” needed to be eliminated, he said. (Taylor said prior to developing triage, he had watched his shop fall from a 1:4 admin-to-tech ratio towards the 1:1.5 range.)

A photo estimating app also can help a shop market themselves rather than being overly reliant on a direct repair program, according to Taylor. He recalled receiving a courtesy call from a DRP making up 28 percent of his volume that his company would be dropped by the end of the month.

The technology is particularly attractive to fleets, for a “major paint point” is downtime, according to Taylor: Fleet owners don’t want their drivers to be off the road. The ability to start the estimate process rolling with a body shop photo app avoids the driver having to stop work and visit the shop for the initial look.

Body Shop Booster also studied customers and found they will only travel 5 miles for an estimate, 15 miles in rural areas, Taylor said. However, they will travel up to 14 miles for a repair, 40 miles in rural areas, he said. Equipping customers with the ability to start an estimate on their phone means a shop has tripled its potential market area, according to Taylor.

Taylor suggested shops could place the photo estimating referral platform on their website as a form of passive marketing and also encourage customers to install it. Tell customers who inquire about a repair they can bring their car into the shop for the initial assessment or download the app instead, he said.

A Body Shop Booster study of 50,000 customers in the U.S. and Canada examined the period between when customers called seeking an estimate to when they actually showed up in a collision repair faclity.

A shop scheduling an estimate finds an 18-20 percent shrinkage rate of customers who bail on the appointment and never show, according to Taylor.

A shop which tells the customer just to drop by anytime leads to 32 percent of them failing to show. “It’s huge,” he said.

Capturing customers with the estimating tool boosts the shop’s odds, according to Taylor.

Taylor suggested that shops with such technology could take over the photo estimating process for insurers. Collision repairers have more skilled estimators than insurers, and 44 percent of the time — the Type 1 hits under 12 hours of damage —  they could come up with an accurate appraisal based upon photos. The other 56 percent of the time, the shop can schedule the customer for the blueprinting stage. (Missing from this is the percentage of claims which can be declared a total and dispensed with immediately.)

Either way, the process moves faster and achieves outcomes beneficial to the shop and insurer.

Cynics might doubt insurers would want to cede that much control or the savings ensuing from pliant photo estimators and overlooked hidden damage.

It’s about $150 a pop for an insurer to hire Snapsheet to review images, Taylor said; spread across thousands of claims, that adds up.

Taylor also estimated that repair costs were only about 30-35 percent of the overall consideration for an insurer. The majority of a carrier’s interest lay in customer retention and lowering personal injury claims.

The shorter the time between assignment to estimate start date, the lower the odds of a personal injury claim, according to Taylor.

As for retention, huge ad spends mean it now costs insurers about 70 times more to obtain a new customer than keep an existing one, he said. Odds are that a customer who’s been in a claim is good for seven years of clean premiums, according to Taylor. That adds up to more than $7,000 in an interest-free or negative-interest loan to the carrier, based on the average 2015 combined premium. Finally, customers who are planning to jump carriers can produce “exit pop” with inflated claims and personal injury demands, he said.

Given all of these factors, it’s fiscally shortsighted for an insurer to put the ability to delay, deny, defend or overlook mere hundreds or even thousands of dollars found by the shop ahead of the risk of pissing off the customer.

“Mishandled” or “corrosive” estimates from insurer photo estimating erode consumer confidence and can lead to customers switching carriers, and “now we’re starting to feel the whiplash” of consumers upset by a lack of photo estimating accuracy, according to Taylor.

“That’s why I believe body shops are the right answer,” Taylor said.

“Photo Estimating | The Good, The Bad & The Ugly”

Photo estimating is good for triage but not an effective estimating tool for damage requiring 12 hours or more of repair time, according to Body Shop Booster CEO Ryan Taylor. (LaymanZoom/iStock)