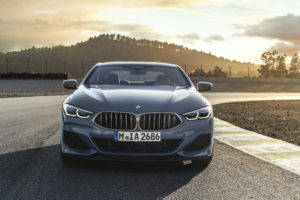 BMW announced Friday it was bringing the 2019 8 Series Coupe to America after 20 years with a mixed-material body that offers the option to swap out the aluminum roof for a carbon-fiber one.

Repairers will note extensive use of aluminum on the hood, doors, roof and front firewall as well as “supporting structures at the front and rear of the car,” according to BMW. The OEM also built the front axle “almost completely” out of the metal and used it for the rear axle’s control arms and wheel carriers as well. The wheels are also cast aluminum.

BMW constructed the “bracing tube for the passenger compartment” (likely a reference to the instrument panel) out of magnesium while using carbon-fiber-reinforced polymer for the transmission tunnel.

The OEM also will allow customers the option of a carbon-fiber roof, which serves to lower the vehicle’s center of gravity. The OEM also offers an optional Carbon Package in which the air intake bars, mirror caps, spoiler and rear diffuser are made out of the composite. 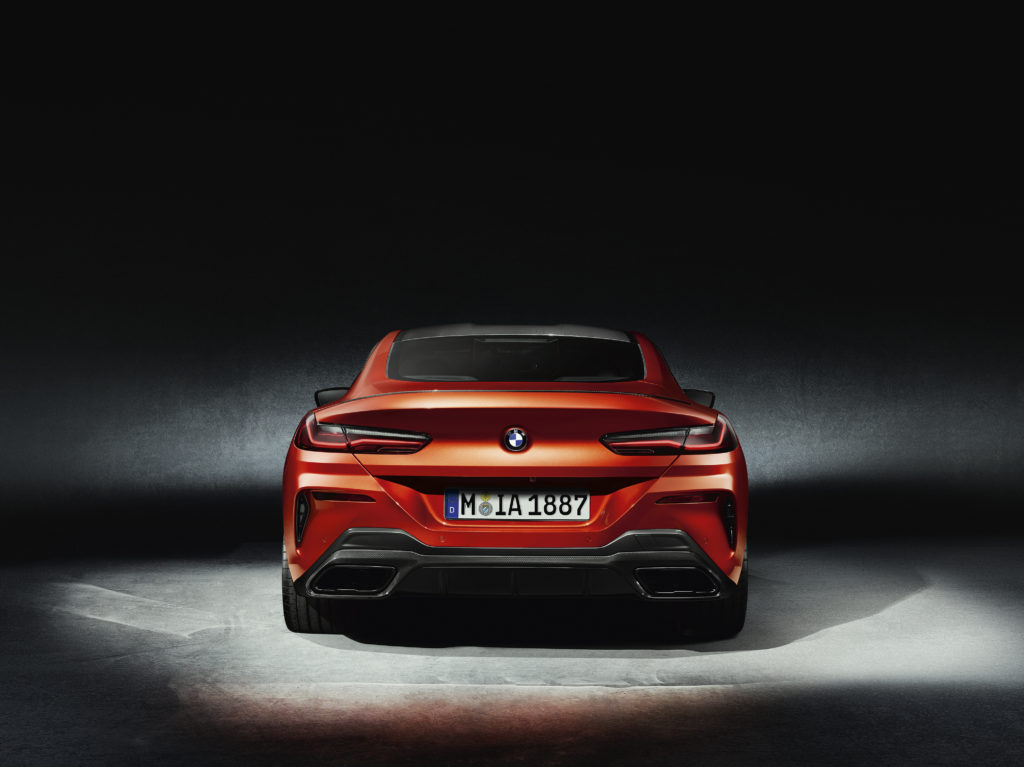 In terms of other exterior features affecting collision repair, shops will notice the 8 Series has “active air flap control with adjustable kidney grille slats and Air Curtains including Air Breathers” for aerodynamics. BMW also nearly completely covered the underbody to improve air flow around the vehicle.

The 8 Series also offers LEDs standard in its front and rear headlights. The front lights are BMW’s slimmest ever and have “BMW LaserLight technology,” which first appeared in the i8 and offers more than double the range of traditional headlights. The headlights also are integrated into the optional BMW Night Vision system, which shows real-time footage of “persons, larger animals and other heat-emitting objects” on the road — and lights up anything detected with “the headlights’ marker light function,” according to BMW.

The wheels “come in the exclusive color Frozen Cerium Grey metallic with a high-gloss polished finish on the face.” And the tires aren’t just OEM — they’re OEM couture. BMW reports that the tire manufacturer created the high-performance tires specifically for the 8 Series.

As for the chassis, BMW said the 8 Series has a double-wishbone front axle and five-link rear axle with bi-elastic bushings. The rear wheels also can be steered up to 2.5 degree for better cornering.

“Torsion struts on the front axle and a load-bearing strut incorporated on the rear axle optimize stiffness and the connection of suspension components to the chassis,” BMW wrote. “Independent rubber bearings – which increase camber stiffness – and additional damping plates at the rear axle further enhance the suspension’s baseline set-up. Special wheel hubs and wishbones allow camber values on both axles to be raised as far as possible. This significantly increases the car’s ability to put down power through high-speed corners.” 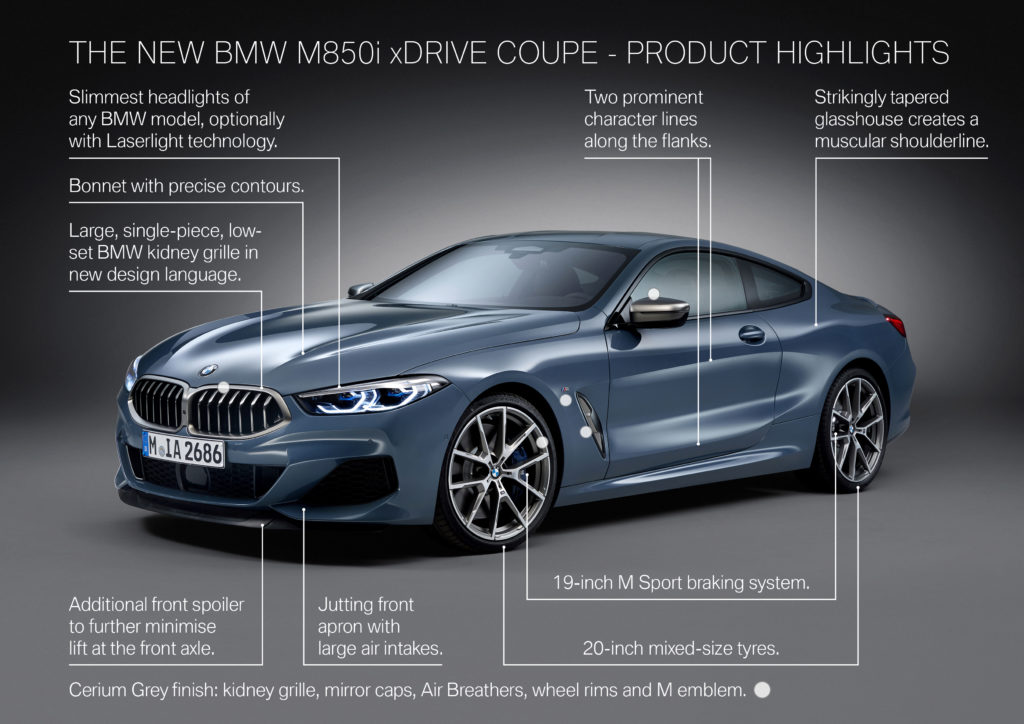 The car is extremely smart, according to BMW. If you’re not following OEM calibration, inspection, measuring and repair procedures to a T, you’re going to screw something up. (By the way, the car shows the folly of repairers and insurers waiting for position statements to figure out if they’re supposed to scan cars. BMW has no such position statement, but you’re out of your mind if you think diagnostics wouldn’t be relevant to this vehicle.)

• “Intelligent networking increases the efficiency of the drive system in the all-new BMW 8 Series Coupe by allowing Auto Start Stop operation to adapt to suit the specific situation based on data supplied by the navigation system as well as by the cameras and radar sensors of the optional driver assistance systems. In this way, inefficient engine shutdown – for example when stopping briefly at junctions with yield signs – can be prevented. The movement of vehicles ahead is registered in order to determine the ideal moment for stopping and starting the engine.”

• “Active roll stabilization is optionally available for the all-new BMW M850i xDrive Coupe and further enhances the car’s sporty handling characteristics. Electric swivel motors on the front and rear anti-roll bars ensure fast and precise compensation for lateral forces during dynamic driving maneuvers. The system is controlled through a constant analysis of vehicle speed, lateral and longitudinal acceleration, steering wheel position, wheel and body acceleration and variation in height levels. In BMW M Performance models, active roll stabilization has an exceptionally sporty set-up and responds adaptively to changing requirements. It optimizes agility and directional stability on turn-in and helps line the car up as neatly as possible for improved acceleration out of corners. The reduced body movement also means that fast evasive maneuvers can be executed with great assurance.

• “At the opposite end of the spectrum, the system increases comfort when driving straight ahead by decoupling the permanent anti-roll bar connection between the wheels of an axle. By stabilizing the wheel that requires it, the system is extremely effective in counteracting disruptive forces resulting from road surface imperfections on one side of the car.”

• Autobraking for other cars, pedestrian and now cyclists comes standard, and an option allows the vehicle to swerve itself out of the way of certain obstacles. Another option has been upgraded to include autobraking for cross-traffic the driver can’t see. An optional active cruise control works both at speeds up to 130 mph but also in stop-and-go situations where the 8 Series is stopped for up to 30 seconds. The 8 Series also offers lane-keeping and active blind spot detection, which not only keeps the car in its lane but will prevent the driver from merging into a lane with another vehicle in the blind spot.

• An options package also features the “Steering and Lane Control” feature, in which the vehicle can steer itself and stay in the center of the lane, though the driver is still expected to keep their hands on the wheel. Think Tesla Autopilot. Automatic parking comes standard — and the vehicle can steer itself in reverse at up to 6 mph for 55 yards to help a vehicle out of a tight spot by retracing the car’s last movements in drive. 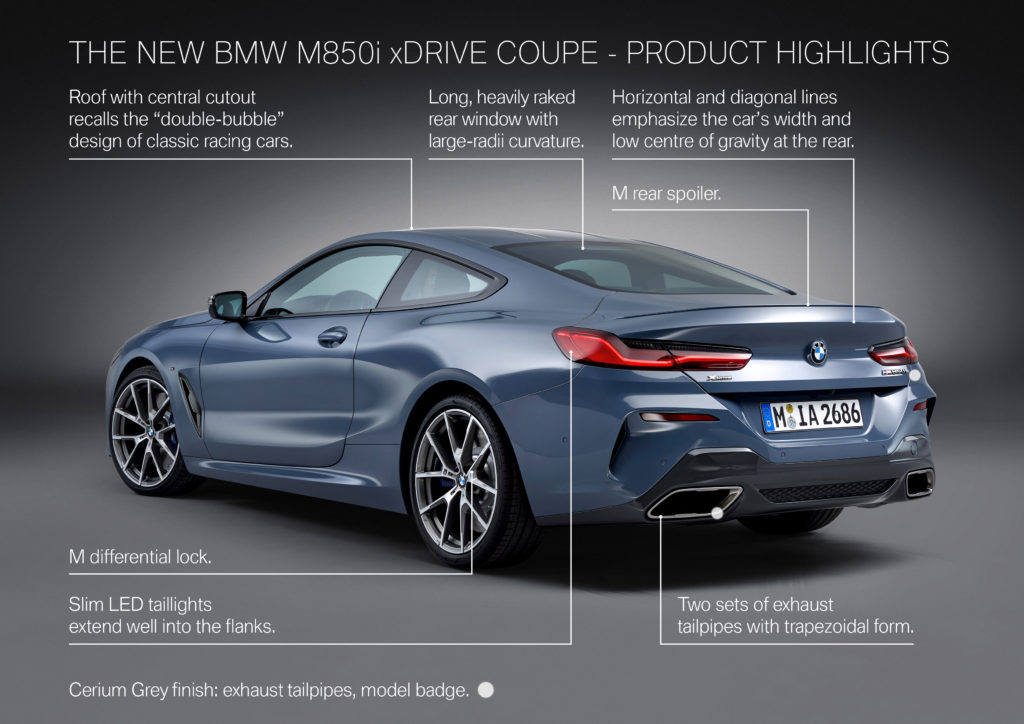 A few other pieces of tech for repairers to note:

• The car receives automatic over-the-air software updates like a smartphone or Tesla. It will be vital for repairers to check OEM repair procedures every time on every individual 8 Series in case something changed not just in those instructions but on the car itself.

• Repairers might have an easier time loading presets. The version of iDrive on the 8 Series reports that “personalization is then stored in the BMW cloud and can follow the customer to other BMW vehicles. Various information from categories such as driving, entertainment, navigation, connectivity, and the vehicle info itself, can be selected in nearly any combination in any of four layouts on the Center Display.”

• The 8 Series has a standard heads-up display, which displays important information right on the car’s windshield. The new version has “a larger projection area, optimized graphics and additional content.”

BMW’s numerical car line had maxed out at the 7 Series, an expensive and carbon-fiber-intensive model which only sold 9,276 units last year. It seems likely that the 8 Series (formerly the BMW M850i xDrive variant) might be a rarity as well for motorists and body shops.

But it’ll be imperative that the shops who do see it are prepared and trained to fix the highly advanced, mixed-material coupe. Studying the 8 Series also might prepare shops for the technological and material developments which trickle down to more common BMW vehicles. 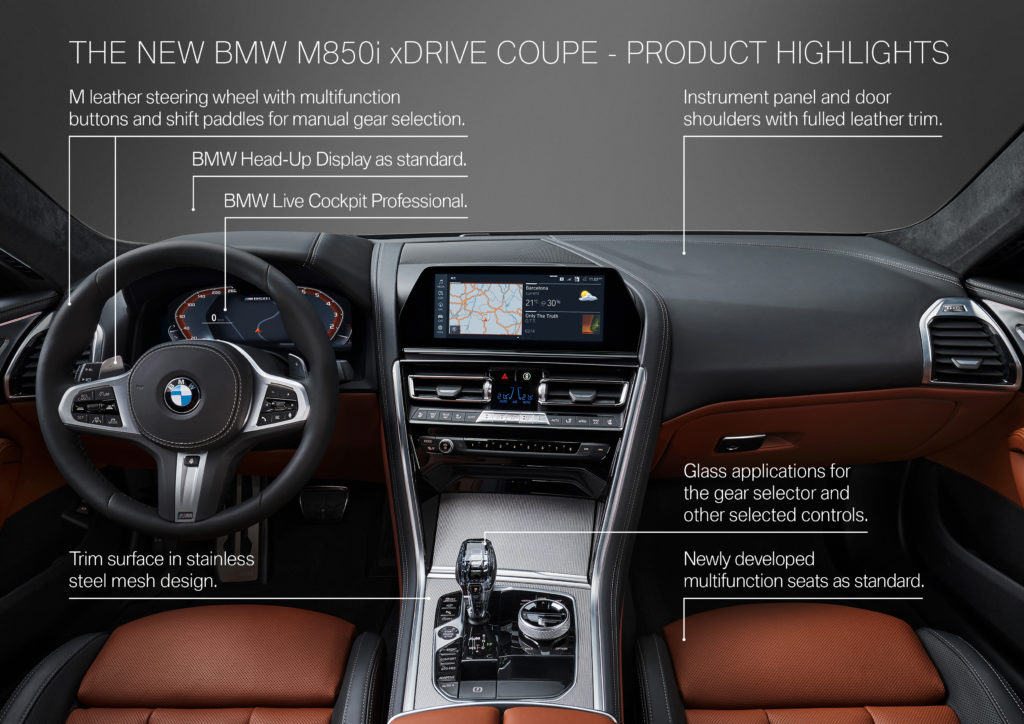 The European version of the 2019 BMW 8 Series is shown. (Provided by BMW)

Features on the European model of the 2019 BMW 8 Series are shown. (Provided by BMW)