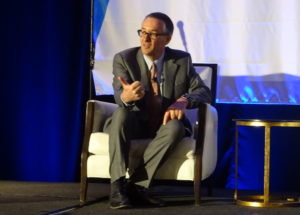 Level 4 autonomous vehicles able to run without a human driver are near, experts suggested at the 2018 Detroit Megatrends earlier this year.

The technology looks poised to eliminate many collisions and offer cheap, on-demand commercial transportation to Americans. However, repairers who can’t find work with these fleet owners (a la AutoNation and Google spinoff Waymo) will still find a large privately owned car parc to tap for business, based on visions of the next 5-20 years presented at the annual Automotive World conference in March.

The conference came less than three months after General Motors announced Nov. 30 it and subsidiary Cruise would bring self-driving cars to at least one major U.S. urban area by 2019 — and scale rapidly once it did so. The Dearborn, Mich., event also occurred just four days before the autonomous Uber-pedestrian collision in Arizona raised questions about the readiness of autonomy for prime time.

The tragedy in Tempe doesn’t seem to have significantly curtailed autonomous vehicle research over the past few months, which would seem to support the bullish projections from the event.

The sentiment from the keynote speaker and an autonomous panel following him favored robotaxis “geofenced” not to drive themselves outside of areas owners know the self-driving cars can handle. That’s the plan proposed by GM and Cruise as well.

This format operates with SAE Level 4 autonomy, which requires no human driver at all, even as a backup, under certain situations. Level 5 autonomy is able to drive anywhere and anytime a human could. As Great Wall mapping and localization manager Vladimir Djapic said in the panel following Lesh, you can let a Level 5 car loose in the “middle of Africa” in any weather, and it can navigate to its intended destination.

Djapic said his company too was working on Level 4 autonomy able to work in geofenced areas under certain environmental conditions.

“The rest of it, driver is not required,” he said.

Hurley Davis, Elektrobit country engineering manager, suggested that metropolitan areas with high amounts of data to help guide autonomous vehicles would be a more realistic first venue for autonomous vehicles in the near term. The existence of the technology didn’t mean everyone would have access to it immediately, he said.

Continental director Jeremy McClain said during the panel he felt the next 10-15 years would see a “seamless mobility scenario” where suburban Americans commute in privately owned Level 3 (the Audi A8’s “traffic jam pilot”) or Level 4 vehicles to the city in which they work. The human retakes control after the self-driving car exits the highway and drives the car to a parking facility, where the car parks itself. An autonomous taxi or public transportation system carries the human the “last mile” to their work, he said.

Lesh’s anecdotes about self-driving and regular Uber usage suggests this would be an acceptable solution. He said some of the 50,000 paid Uber trips in self-driving vehicles involved the passenger having to walk a short distance to reach a pickup location where the vehicle felt comfortable.

Already, human-driven Ubers also offer a cheap solution to the “first and last mile problem” of public transportation or even autonomous routes ending somewhere other than the user’s destination, according to Lesh.

He observed that the number of Uber rides which end at a subway station in London in the morning was “amazing,” and a similar trend can be seen in the evening. Some cities have even partnered with Uber to offer discounted rides to those public transit points, he said. Moderator Thomas Major, the industrial manufacturing principal at KPMG, said his company performs a lot of projections out 20-25 years. He presented an “optimistic growth view” that described “two very different markets for cars” by the 2030s and 2040s

Autonomous mobility vehicles will resemble commercial trucks and airlines today, he said. Companies will establish inventories based on the total cost of ownership, and “they don’t want to reconfigure” their operations annually, he said.

If a particular OEM’s autonomous vehicle isn’t the one picked for the fleet, that automaker will be “out of luck” for 5-7 years, he said.

Meanwhile, private passenger ownership would continue, he predicted. Americans would still have small children with the accompanying luggage to haul around or a desire to take longer-distance trips.

However, instead of 2.6 cars, we might privately own an average of 1.6, or even 1, and we’d probably do much more autonomous vehicle hailing instead of driving.

He called this an “optimistic growth view” for the industry. Heinz Mattern, Magna near-field product director, predicted that by 2025, we would see a “significant number” of Level 5 vehicles, but they would still make up a single-digit percentage of the overall driving population. He later clarified that he saw a steering wheel-less Level 4 autonomy — essentially, “restricted Level 5” in the 2025 range.

Djapic said he felt Level 4 would be possible 5-10 years from now. The technology was “kind of there and not,” he said. “98 percent” of the tech was ready, but “corner cases” still existed that put that 2 percent far longer out of reach.

“The brain is still not there,” he said, and it would need to reach that point in 10 years to be accepted.

Continental director Jeremy McClain predicted it would be more than a decade before even 10 percent of light vehicle production was Level 4-5. However, a great deal of consumer protection and consumer acceptance of the technology would arise with Level 2 systems. (For example, autobraking.)

“At the end of the day, the technology’s very similar,” he said. Major asked if the barrier to autonomous vehicles was a technological hurdle yet to be overcome, such as a LiDAR able to see 200 meters ahead, or if the issue was simply proving the systems were robust enough to operate safely.

Continental director Jeremy McClain said that his company’s fifth generation of LiDAR delivered 300-meter range and the necessary field of view, and “we’ll be ready in the next year.”

Mattern said cars are were already driving themselves.

“The technology works,” he said, though he said this might not be the case in every situation.

Mattern said he saw many people working on the technological and regulatory hurdles to achieve some autonomy by 2025, and the concerns he had on that front two years ago no longer existed.

“I think we are getting very close,” he said.

McClain said the technology existed for small-scale autonomous deployment. In 2020, Continental will launch the first automotive-grade solid-state LiDAR, and the artificial intelligence supercomputer side of the equation will hit its stride about in the same time frame, he said.

The validation side is a “huge challenge,” he said. Some company would have to step up and make the case that “‘This is what’s good enough for now,'” he said.

But on the whole, none of the factors he cited were “huge hurdles,” he concluded.

Lesh said there was a “tremendous amount of work to do” on self-driving cars, but after 2 million Uber miles in autonomy mode, “there is, at least, a vision of the future in sight.”