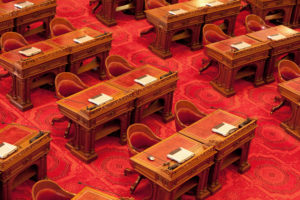 Despite serious concerns by the California Autobody Association, the California Assembly voted 75-0 May 31 for a bill allowing insurers to conduct labor rate surveys under new formats than that suggested under 2017 California Department of Insurance regulations.

The trade group will have a second opportunity to head off the legislation this week during its hearing scheduled 1:30 p.m. PT Wednesday before the Senate Insurance Committee.

The CAA in a June 20 letter told sponsor Assemblywoman Autumn Burke, D-Inglewood that it “must again regretfully oppose” Assembly Bill 2276, calling it better than its 2016 predecessor AB 1679 but still “fundamentally flawed.”

AB 2276 still allows insurers to define an auto body market as the area under the mile-out-from-nearest-six-shops-responding-to-the-survey model suggested by the CDI.

But it also declares that a carrier who conducts a labor rate survey of shop posted rates — not direct repair program rates — can have a “rebuttable presumption” of good faith so long as they “randomly survey the number of shops necessary to obtain the number of qualified responses required to achieve a minimum confidence level of 90 percent and standard error of no more than 10 percent” within a market defined as California Employment Development Department local workforce development areas.

The CAA said it was concerned such boundaries were “artificially large.”

“These boundaries include areas as large as counties and multi-counties,” CAA interim Executive Director Don Feeley wrote to Burke. “The legislature recognizes that local workforce development areas are too large and do not reflect local markets which will result in a statistically invalid surveys. As such we have suggested as a compromise that workforce development areas that contain more than 100 auto body repair shops be divided into areas that contain less than 100 shops using geographic proximity (so there in no gerrymandering) and similar market conditions (defined below), provided that the minimum confidence level is 95% and the standard error is no more than 5% (below). … “Market areas for body shops are small and local to their customers. Insurers must address local market conditions when applying labor rate in a specific geographic area. In order to provide clarity. the bill should define market conditions. We have suggested the following language: market conditions mean various local economic factors including, but limited to, labor costs. rent. land prices. local laws and regulations. …

“The smaller the margin of the error. the more confidence there is in the labor rate results. We have suggested that the minimum confidence level be 95% and the standard error of no more than 5%.”

“The Rebuttable Presumption provision should be deleted,” he wrote. “Last year the stakeholders agreed there would be no rebuttable presumption going forward.”

“Knowing how to repair aluminum properly is no different than knowing how to perform structural steel repairs properly: both require specific training and equipment and because of that. both have specific labor rates,” Feeley wrote. “These rates are already being surveyed by insurers, and are a requirement of CD] regulations.  The bill leaves a big gap in how insurers will pay these rates and invites disputes by consumers and their chosen auto body shops.  The written standardized questionnaire must also survey Aluminum, Carbon Fiber and Fiberglass.”

A carrier wasn’t forced to conduct a labor rate survey at all under the CDI’s regulations, nor are they under the revised AB 2276. Under the CDI regs, an insurer can also use a different method of surveying shops — they’re just rolling the dice that the agency will object to it.

AB 2276 appears to allow carriers even more latitude to calculate the prevailing rate however they want with the statement, “This section shall not preclude an insurer from determining the prevailing auto body repair labor rate using methods other than the auto body repair labor rate survey methodology authorized by Section 758.1, or other than the methodology in Section 2695.81 of Title 10 of the California Code of Regulations, that reasonably consider market conditions in a specific geographic area.”

Unlike the CDI’s regulation, which pursues a “fair and equitable” claims settlement and “the good faith, prompt, fair and equitable settlement of automobile insurance claims pursuant to Insurance Code section 790.03,” the bill only states that the CDI “may use existing authorities to examine whether or not these other methods are consistent with an insurer’s contractual obligations to its policyholders.”

The California Senate is shown. (slobo/iStock)