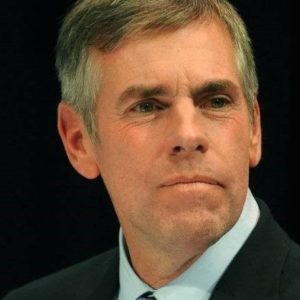 Calling it a “monumental” precedent to elect a tradesperson governor, Republican body shop owner Shawn Moody is one election away from Maine’s highest office.

Moody defeated three opponents to win the Republican primary earlier this month and will face Democratic Attorney General Janet Mills in the general election, according to the Portland Press-Herald.

Moody said elections like his were what was needed in government. He arguing that American founding fathers were tradesmen who lived in the community, served, and then went back to work.

Today, candidates are political science majors, and “they don’t have that real-world, real-life” business experience, Moody said. As a small businessman, he understands regulations, taxes and health care, he said.

Moody discussed this background and plans for the state and industry in an interview Monday.

He said multiple trades are having shortages besides collision repair because of a lack of focus on trade education.

“That is the number one challenge facing our industry,” he said.

However, Moody said Moody’s Collision Centers itself hadn’t been hit by the tech shortage, calling the shop “ahead of the curve.” He said the multi-shop operation will “grow our own,” starting repairers out as apprentices.

The company is also 34 percent owned by an employee stock option plan. “That’ really creates a culture of community,” Moody said. (The company has grown 18.1 percent per year since it launched in 2003, the shop boasts.) Employees also receive 10 percent profit sharing after taxes.

The company offers full transparency to its staff, letting them see quarterly financial and some KPI data, according to Moody and the shop.

But to help the rest of the industry and other skilled trades, Moody hopes to require that every Maine vocational instructor be required to spend two weeks with two different best-in-class businesses. This way, they can see whether their students are even learning the skills demanded by that industry.

“From an employer, that’s the challenge,” Moody said. Students who graduate having learned obsolete processes find it “dispiriting” to discover they’re not ready for the job, and for an business owner, “it’s hard to unlearn somebody,” he said.

The initiative also would foster a working relationship between the school and industry, Moody said.

“The instructors want to do it,” he said of the educators he’s contacted.

Moody said he also would raise state funding for vocational and technical education.

Moody’s resume includes time in the auto recycling, auto auction and collision repair industries. As a junior in high school, he bought a junkyard and transformed it into “one of the leading auto recyclers in the country,” receiving the Automotive Recyclers Association Gold Seal award in the 1990s for environmental and operational excellence.

In 1998, Moody sold that business to LKQ, in what he said was Joseph Holsten’s first deal as CEO. He continued working with LKQ, traveling around the country looking at other acquisition targets and working on the business inmprovmeent team for newly purchased salvage yards. He called it a “great experience” to travel aronud the country and see different business operations.

He also bought an auto salvage company last decade, selling to Insurance Auto Auctions in 2010. Both IAA and LKQ continue to lease 20 acres each on his property, which makes for “quite a compound right here.”

Moody’s Collision Center started as a three-bay shop when Moody was in high school. Today, it has 11 locations, bills itself as the “only multisite operation in Northern New England” to be I-CAR Gold, and has won “Best Places to Work” and Governor’s Award for Excellence in Business honors.

Moody has worn three different auto aftermarket hats in his career and still has ties to two of those industries. This could make life interesting if a bill reaches his desk favoring one of those industries at the expense of another. Who gets a signature, and who gets a veto?

For example, auto recyclers in Rhode Island recently opposed a shop-backed bill banning insurers from requiring deviations from OEM repair procedures, fearing the clause would prohibit everything but new OEM parts. A bill in West Virginia banned anything other than new OEM parts for the first three years of vehicle life.

Asked about how he’d handle such situations, Moody said not a lot of conflicting legislation occurred in Maine, which didn’t have a collision repair trade group. He said he thinks three-dimensionally about such issues, and didn’t share some repairers’ opposition to aftermarket or recycled parts.

However, aftermarket parts needed to be certified and couldn’t affect safety, and ultimately the repairer needed to stand behind whatever the customer received.

He said he was also a big advocate of recycled parts, “as long as it’s like kind and quality.” 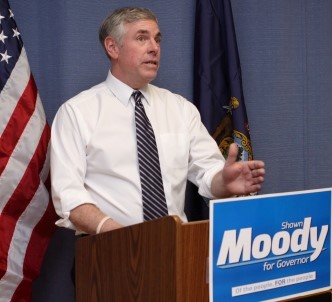 Health insurance will be another major focus for Moody if elected.

He called this the other “most significant problem.”

Moody’s Collision chose to go self-insured, but smaller companies can’t do that, he said. He would like a bill to buy insurance across state lines so smaller shops could have better buying power.

Moody pointed out that dozens of licensed auto insurers did business in Maine, but only three health carriers were licensed.

Moody said New Hampshire had more like 10-12 heath insurers, and their premiums were 30 percent lower. He suggested Maine “pick the best practices” out of states with similar demographics and geography and “capitalize on what they’re doing right.”

Maine’s insurance commissioner is appointed by the governor. However, unlike collision repairer colleagues in some other states, Moody was satisfied with the Maine Bureau of Insurance and didn’t express a desire to replace Superintendent Eric Cioppa.

He said Maine was one of the cheapest places to buy auto insurance, showing that “capitalism works,” though health care insurance costs were “not sustainable” and hampered small businesses.

Moody’s said his MSO was “lucky” and had good working relationships with insurers, though the lack of a standard insurance industry way to process a claim was “an administrative challenge.”

However, “I think that’s more of a national issue,” he said.

Asked what would happen to his business should he get a full-time job in the governor’s office, he said his brother served as president, and the employee-owned company had a “tremendous culture.”

Moody’s Collision Centers posted a record-breaking quarter while Moody was out on the campaign trail, he said.

“I should have got out of the way a long time ago,” Moody joked.

Featured images: Calling it a “monumental” precedent to elect a tradesperson governor, Republican body shop owner Shawn Moody is one election away from Maine’s highest office. (Provided by Moody’s campaign)