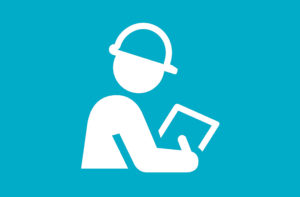 OSHA officials most frequently cited auto body shops for respiratory protection and hazard communication noncompliance in over the year ending in September 2017, resulting in nearly half of the $364,270 in penalties slapped on shops last year.

Those fines were levied for violations found in 80 inspections. If each of those were a separate shop, getting caught doing something wrong costs a repairer more than $4,500 a pop.

OSHA records indicate the agency conducted or attempted 302 inspections in the industry between Oct. 1, 2016, and Sept. 30, 2017. With 80 inspections yielding citations, that’s a more than 1 in 4 chance of getting dinged for something if your company is selected for an inspection. (To see common violations and inspection results, use the industry’s NAICS code 811121 here and here.)

Compliance assistance specialist John Olaechea, whose regional six-state OSHA office is in the midst of a special investigative emphasis on automotive business, described some of the ways repairers might be tripped up by their workforce — or worse, employees injured by it.

Respiratory protection, the subject of a Society of Collision Repair Specialists Education Committee presentation earlier that CIC Week, resulted in $104,734 in penalties over 55 inspections over the year. Hazard communication cost shops $54,046 over 41 inspections. (Some inspections found multiple violations.)

Respiratory protection citations might include whether the employees received a fit test, medical evaluation, and training; using an incorrect piece of protective equipment; and respiratory equipment storage, cleaning and maintenance, according to the SCRS presentation and Olaechea.

Olaechea said chemical use and hazard communication was “a big one.” A shop needed a written program for how they would tell their employees about various harmful substances, he said, recommending repairers to an OSHA guide for small businesses.

Olaechea said the main reason for his regional office’s specific emphasis program was automotive lifts, which he acknowledged was perhaps more of an mechanical service and repair issue than a collision repair one. An eight-year period last decade saw lifts killing 74 people in the automotive sector, he said.

Often, this was because of issues like a lack of proper maintenance, locks not working or hydraulics failing, he said. He asked the audience how many of them had received a lift inspection in the past year — an OSHA requirement. Employers also have to maintain the labels and train employees, and employees need to be using the lift properly. He said that when he started doing inspections for OSHA, there was a backlog of companies who could perfom inspecionts.

The lift issue is handled under the General Duty Clause, according to Olaechea. It states that a  boss “shall furnish to each of his employees employment and a place of employment which are free from recognized hazards that are causing or are likely to cause death or serious physical harm to his employees.”

This catchall provision — “OSHA doesn’t have a standard for everything. We can’t.” — relies on best practices or consensus standards, said Olaechea. In the case of lifts, Olachea advised shops to use the ANSI standard on automotive lifts.

Olaechea said your lift operator is “probably not” qualified as an inspector. He said “there’s some pretty specific” and at times ambiguous rules about who can inspect a lift, but it’s likely not your employees. Just getting an inspection isn’t enough either — he said often OSHA will encounter a business who gets the lift inspected but doesn’t act on the inspector’s recommendations.

The standard also contains requirements for training whoever operates the lift at your shop and for the employee’s innate abilities — for example, they must understand math well enough to know if the machine can safely lift whatever’s being elevated. 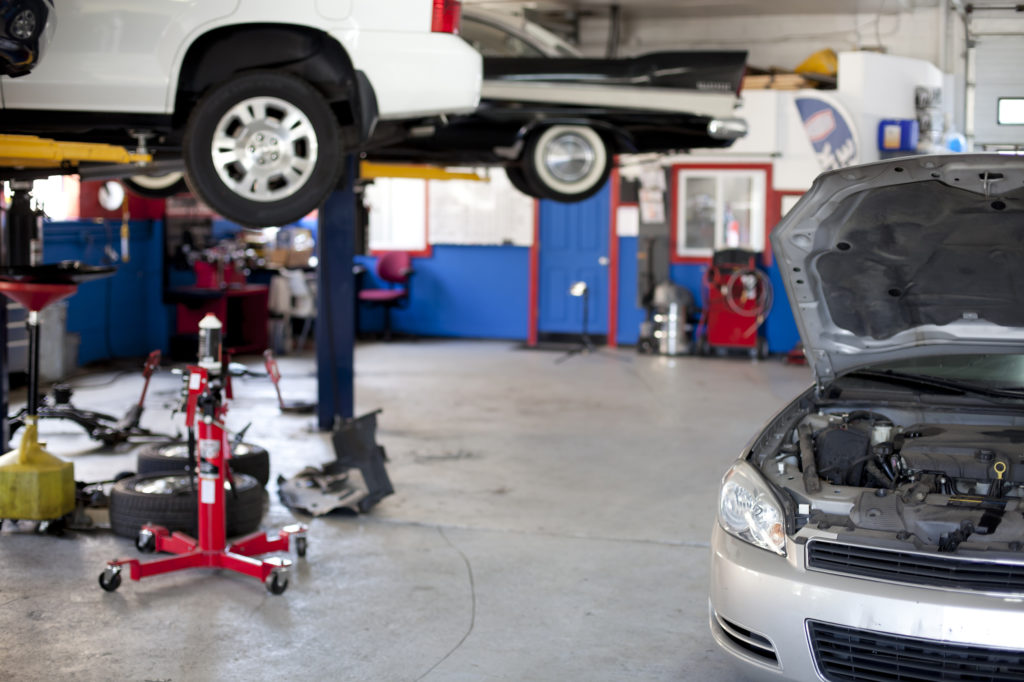 Besides the respiratory protection issues discussed above, every employer also is expected to do an hazard analysis and determine what personal protective equipment will be required in general, according to Olaechea. It’s also on the boss to provide that gear and ensure employees use it.

Asked if a sign declaring safety glasses are required behind a particular point means employees always must wear them or just when they are performing a task requiring the PPE, Olachea said OSHA has ambiguous language.

Essentially, you need to wear them “when you need them,” he said. OSHA would cite a shop if it sees a hazard and unprotected employees at the same time. If the employees weren’t near the threat, the shop probably wouldn’t be cited.

He noted that OSHA’s jurisdiction was limited to the safety of employees. A sign like that might be helpful to keep clients and customers from suing your shop over an injury, he said, but those weren’t really OSHA’s problem.

For your employees, “the sign is great” and can be a component of the shop’s efforts — but it must be enforced, he said. If someone is grinding without eye protection in a shop, OSHA will cite the shop — the existence of a sign doesn’t excuse the business’ responsibility, according to Oleachea.

Other highlights from the presentation included:

Isocyanates: OSHA doesn’t always have permissible exposure limits for isocyanates, a chemical which can be found in shop materials, particularly clearcoat, he said. Sometimes, it uses other groups’ standards or even manufacturer standards for what is safe.

“People have lost fingers from this,” he said, and the chemical isn’t even that painful — “untl your finger’s gone.”

Noise: Repeated usage of an air hammer or grinders might result in a “noise issue” with OSHA. At 85 decibels as an eight-hour average, you have to take certain steps as an employer including offering annual audiograms. At 90 decibels, you have to do “even more.”

If you often have to yell a lot at your workplace, you might need to take steps like noise monitoring or using an industrial hygienist, he said. 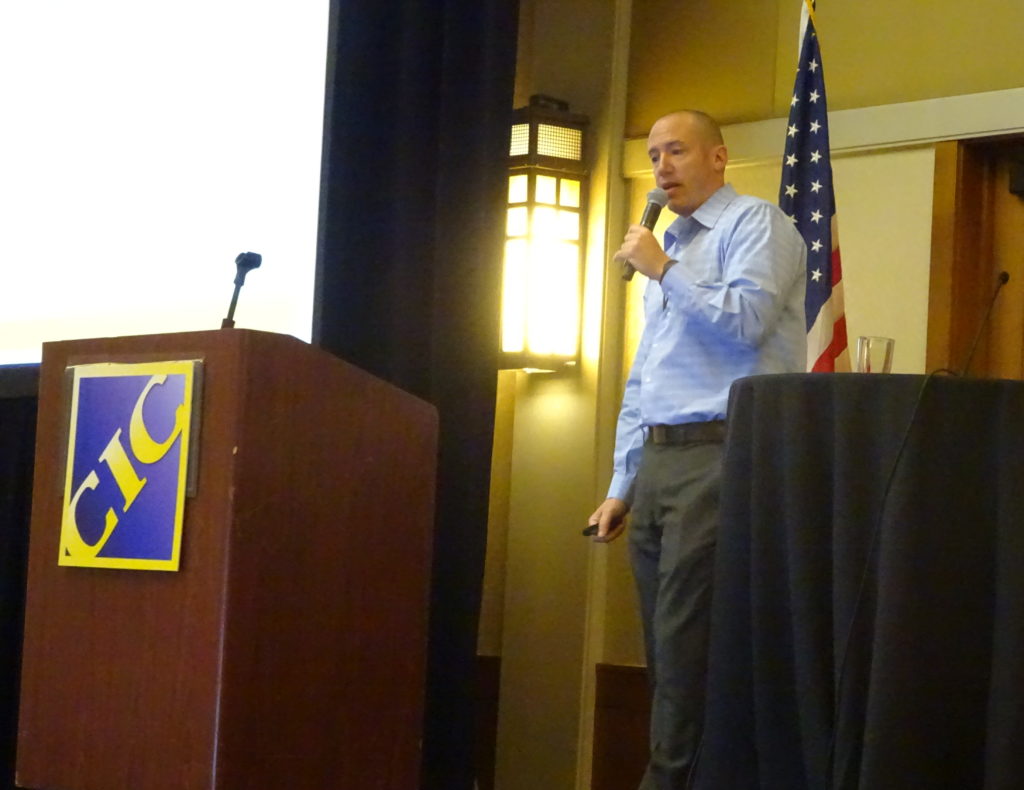 Paint stripper: Methylene chloride has appeared in a fair amount of shops inspected by OSHA, according to Olaechea. The paint stripping substance carries an expanded health standard, and “you have to do a whole lot of stuff as an employer,” he said. Many employers opt not to use the stripper to avoid the hassle, he said.

Explosion risks: OSHA hasn’t issued many citations for combustible dust, but its existence near an ignition source could be an issue for a body shop, according to Olaechea. While OSHA doesn’t have a specific combustible dust regulation, it has a combustible dust emphasis problem, and it will cite shops under other standards, he said.

If the agency can find 1/32nd of an inch of dust covering 5 percent or more of surface area — “that’s a problem,” Olaechea said. Kicked up into the air, “you could have a really explosive environment,” he said.

It’s also worth noting that OSHA gives a nod to NFPA 484, a standard for combustible metal dust which includes aluminum dust. (Also magnesium, but based on Chrysler’s warnings for the Pacifica’s liftgate, repairers probably shouldn’t be doing anything that produces the explosive dust.)

Crystalline silica: OSHA has a new crystalline silica standard, but the substance typically hasn’t been an issue in the industry, according to Oleachea. Research has indicated that auto body shops won’t be able to reach the threshold where OSHA would care, and language in the federal register even notes this.

Olaechea said a shop could argue “that’s my exposure assessment” and it was indeed unlikely a repairer would produce an unsafe amount of the substance. However, OSHA would still cite an employer if some sort of unusual behavior generates crystalline silica over the limit, he said. He also warned that the agency later reversed itself on similar findings related to mortar mixing — it was more likely to reach an unacceptable level than had been thought.

Miscellaneous: Olaechea also mentioned issues like homemade, unsafe stairs or a storage area missing railings or overloaded for its weight, offering the image seen below.

He said a new OSHA standard demands employers know the rating of a surface before loading it up, recalling a fatality and a major accident in which overhead storage surfaces were overloaded and collapsed on people underneath. Using an area for storage might start out with a few items, but “employees tend to just keep loading stuff on there,” he said. 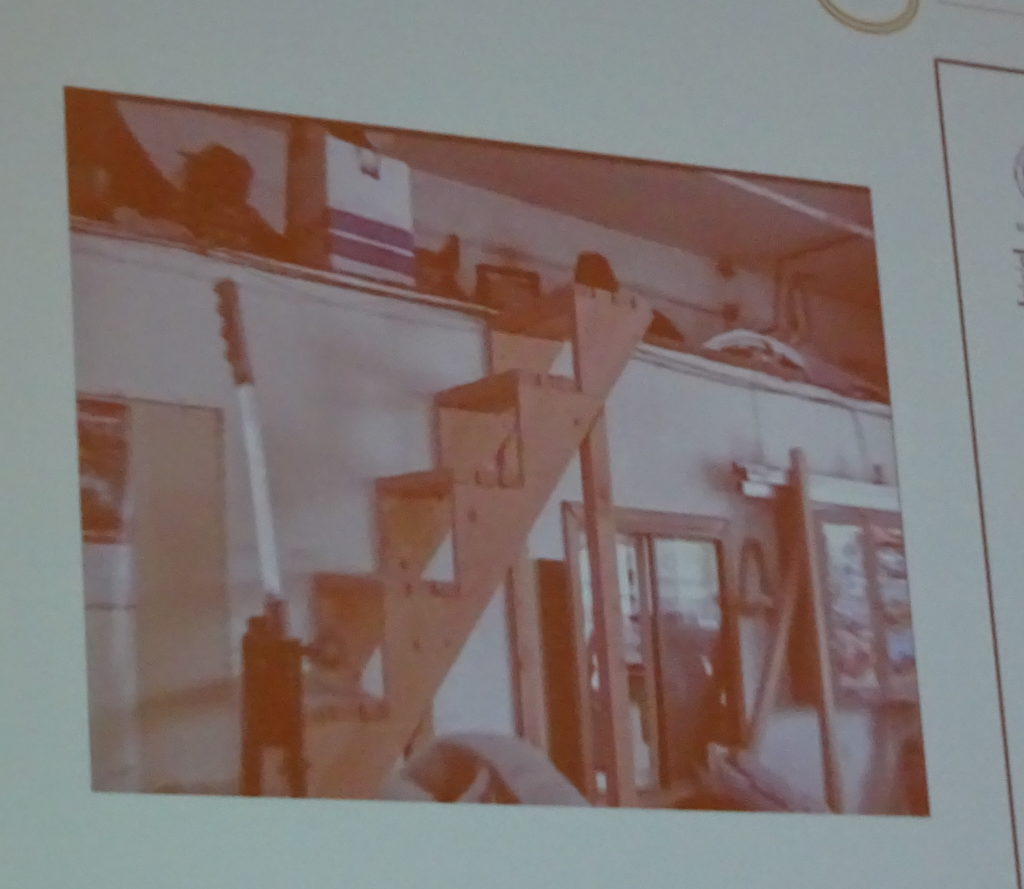 OSHA officials most frequently cited auto body shops for respiratory protection and hazard communication noncompliance in over the year ending in September 2017, resulting in nearly half of the $364,270 in penalties slapped on shops last year. (appleuzr/iStock)

Lifts can be fatal in an automotive business. (patrickheagney/iStock)

OSHA compliance assistance specialist John Olaechea told an April 12, 2018, Collision Industry Conference audience his agency had “specific ways” of appearing at your shop for an inspection, but “calling us and asking a question is not one of them.” (John Huetter/Repairer Driven News)

OSHA compliance assistance specialist John Olaechea told an April 12, 2018, Collision Industry Conference audience his agency had “specific ways” of appearing at your shop for an inspection, but “calling us and asking a question is not one of them.” (Photo of slide by John Oleachea, OSHA)