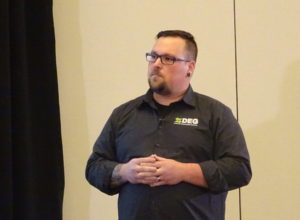 Because of copyright restrictions, aftermarket part manufacturers can’t put OEM emblems and badges on their copies, according to the DEG. Therefore, you have to apply the logos yourselves — and manually enter them in the databases as well, the DEG wrote in April.

“OEM parts will typically come as an assembly or available to purchase separately,” the DEG  wrote. “The estimating system may not allow you to select the additional part to be added if this is sold as an assembly from the OEM. This will require a manual entry or may want to consider using a complete assembly part from the OEM.”

“They may not be identical to the OEM design,” it wrote.

The DEG in March cited Mitchell’s instructions for dealing with quarter panels with undamaged urethane glass — something that is not factored into Mitchell’s quarter panel times.

Mitchell gives the example of a quarter panel allowance with a back glass R&R of 2.0 hours but an R&I of the back glass would be 2.3 hours.

“The difference of .3 hr. between Back Glass R&R (2.0 hr.) and R&I (2.3 hr.) has not been factored into the Quarter Panel allowance,” Mitchell wrote in the example.

The DEG noted that you can select the additional labor by using “Add to R&R” in the part selection menu. The DEG in April reported that a March inquiry about a 2017 Honda CR-V EX had revealed a hole in the system related to fan blades and motors.

“REPLACING RADIATOR AND CONDENSER, LABOR TIME FOR SHROUDS ARE INCLUDED OPERATIONS,” the user wrote. “NEED TO REPLACE BOTH SHROUDS, AND IT SAYS LABOR TIME TO R&I FAN BLADES AND MOTORS ARE INCLUDED.”

“R&I Fan motor, and R&I Fan blade is included in the R&I Shroud as an assy labor time,” CCC replied. “All parts are only being removed as one unit, so time is 0.4.

“The only way CCC and MOTOR can currently support additional time is for the user to select R&R Cooling shroud, zero out the price in the estimate, then R&R the Fan motor, and Fan blade to receive 0.6 total. The labor time allowed to R&R Radiator takes into account the time for the Cooling shroud assembly.”

CCC wrote that an estimator might have to manually adjust the times “to support the difference in time between R&R and R&I of a part based on an included operation in a footnote.”

It also updated its database to show the fan blade and motor are included as part of an assembly in the R&I shroud operation.

“Always refer to the part selection footnotes and the (MOTOR) Guide to ensure labor is being assigned correctly.”

CCC doesn’t handle new and recycled parts the same way with regards to clear coat, the DEG reported in April.

“When a ‘recy’ fender is being used, The user must manually add time for the inner panel,” a user wrote in an April inquiry about a 2015 Chevrolet K2500. “This should be automatically added option like the NEW part option when selected. Second issue is when you add labor for “Edges” and “inner panel” the line properties does not give an option to add clear coat to the inner edges/ inner panel like the NEW part selection would allow for. Why cant the system give a add for clear coat prompt when refinishing edges/ inner panels for for the recy part for thisvehicle? The user will always have to go to the line properties and check the box.”

For now, manual was one’s only option, CCC replied, but it would try and work on its handling of recycled parts or assemblies.

CCC’s collision-estimating tools contain limited automated logic support when recycled parts or assemblies are used,” CCC wrote. “All of CCC’s tools include MOTOR’s RACED database so the estimator has all of the necessary information, and can make the appropriate manual adjustments. CCC will be implementing additional logic in future product releases.”

“DEG encourages users to manually enter the missing refinish labor associated for edges and insides if applicable for that specific repair needs,” the DEG wrote.

It referred users to the clear coat formula in the CCC P-pages, which involves adding 40 percent to the first major panel’s refinish time and 20 percent to any other panel — with a max time of 2.5 hours.

“Note that 2.5 clear coat cap is for ONE continuous application and booth cycle,” the DEG wrote. “If multiple booth cycles are needed for repairs, the clear coat cap would start over and this would need to be a manual consideration.”

It also asked users who find a similar discrepancy to post an inquiry.

Repairers and insurers can make use of the Automotive Service Association’s free “Reference Chart of ‘Not-Included’ Operations When Installing New Replacement Parts,” the DEG noted in April.

“This chart gives users a quick reference between all three information providers’ not included operations broken down by component category,” the DEG wrote. However, the DEG also called it “important to note, this is not a substitute” for the actual Audatex, Mitchell and CCC P-pages.

The ASA also has one for “LKQ” parts that’s free as well, as well as a free discussion of extra refinishing steps needed under a variety of circumstances.

Another good free trade group resource in this vein is the Society of Collision Repair Specialists’ Guide to Complete Repair Planning.

The DEG in March cited Mitchell’s instructions for dealing with quarter panels with undamaged urethane glass — something that is not factored into Mitchell’s quarter panel times. The DEG noted that you can select the additional labor by using “Add to R&R” in the part selection menu. (Mitchell screenshot provided by the Database Enhancement Gateway)