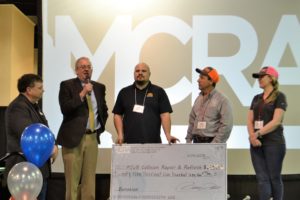 The Montana Collision Repair Association‘s recent trade show did as much for developing the next generation of techs as it did for the existing industry.

The April Rocky Mountain Trade Show raised more than $60,000 in cash and equipment for Montana State University-Billings City College, home of the state’s only college collision program. The event free to repairers and the public also promoted the industry to state youth and parents attracted by its car show.

It’s an example of how a state trade group with a little ambition can really make an impact on the industry and public. Though the MCRA held a test trade show in Great Falls 3-4 years ago, the event was the state organization’s first real expo, an organizer said.

The show was the brainchild of Mariah Sampson, marketing director for American Auto Body and daughter of MCRA Vice President Todd Litton.

However, Sampson was quick to credit others in the MCRA and Society of Collision Repair Specialists Executive Director Aaron Schulenburg for their significant assistance.

“I had a lot of really great advisers,” she said. There was a “lot of teamwork,” and “it was all different shops.”

Sampson said the MCRA rotates its meetings throughout the large state, and when her shop’s home of Billings, Mont., came up in the rotation, “I got a little ambitious.”

Sampson decided to attempt a trade show with the vision of having it accompanied by an educational conference and car show. Even though the MCRA is a strong state association already, she wanted to attract unaffiliated shops to check out the organization.

Even shops who didn’t want to join were encouraged to attend and do research on equipment they planned to purchase — or possibly win something for free by signing in.

“The vendors were phenomenal throughout the process,” Sampson said. Thirty-three vendors participated in the show, which drew 135 shop employees and another 200 walk-ins.

“It was a really awesome, awesome weekend,” she said.

The event was opened to the public as MCRA wanted to educate Montana residents as to what the industry had to offer. Sampson called the RR Frames car show a “great draw” for youth, with “really cool, amazing” cars, and “it was great for the public.”

Sampson said society seemed to have a “thought process” that body work was “dirty work” and “not a good career path,” yet “you can go on to any hiring site in the country” and see shops trying to fill openings. The goal was to change the perception.

She noted that her father said “‘You have a huge hurdle'” at the family business, predicting it would be harder for her to find qualified employees than it had been for him.

Public re-education was the solution, Sampson said. She said she had many smart, driven “young business professionals” as friends. When she tells them how much staffers make right out of school, the reaction is, “‘Wait, what?'”

MCRA structured the floor plan so that attendees had to walk past the booths to get to the car show.

Sampson many of the kids attending the program said “‘I love cars,'” and seemed to know everything about the vehicles on the show floor. However, they’d say they never worked on a vehicle, and the repairers would assure them that’s OK — there were roles for car lovers as estimators, managers, service writers, or front desk staffers.

Another message: “‘Our industry is so computer-based,'” according to Sampson.

Sampson said she felt the event was a “big epiphany” for parents regarding jobs in the industry.

Slides during the event displayed facts about the industry, including the jobs available, the cost of the trade school, details about collision repair — and pictures of income and images of boats and homes.

“That (the earning potential) kind of stuck” with the kids, with dads “kind of elbowing them,” Sampson said.

Sampson said association members were encouraged to donate part of their ad lineup to MCRA and replace commercials for their shops with predeveloped radio, television and Internet ads for the event. She also reached out to counselors and city colleges with promotional materials, and MCRA was able to hype the event on radio shows.

“‘This is amazing,'” City College collision instructor Steven Wodrich said, according to Sampson. The program’s annual budget is only $10,000, he told her.

The cash will create a fund that the college can tap for expenses, including tools and equipment.

“We’ve had a lot of great success with Steve this past year with all the things he’s doing, and we know he’s got a great future ahead providing awesome opportunities for our students,” college Dean Clifford Coppersmith said, according to the college.

MCRA Treasurer Matthew McDonnell (Big Sky Collision Network) donated pedal cars to the college program. Students painted them and auctioned them off at the event, and “it was just so cool” to see the support, Sampson said.

Even attendees who felt they couldn’t bid $2,000 on a pedal car would conclude, “‘I want to donate 50 dollars,'” Sampson said.

She said attendees were matching bids, and at one point, the audience was asked how many of them had difficulty recruiting help. That’s why supporting the city college degree — an expensive program to keep running — was so important, they were told.

At that point, those repairers who weren’t already contributing to the college had a “moment of clarification” they should step it up, even contributing a mere $50, Sampson said. The event also “kind of guilted” attendees into donating by pointing out that the food and alcohol were free, she said.

“It was so cool,” Sampson said. The vendors saw how invested the shops were in the program and donated the equipment.

The MCRA also donated another $17,500 to the MSU Billings Foundation, according to the college. The trade group had been working for years to start a scholarship fund.

“This money will go into a lifelong endowment,” Litton said, according to the college. “We’ll be able to draw so much money annually to create scholarships for kids across the state of Montana to get them interested in auto collision repair programs.”

“The name of the game is going to be bringing the students in, getting them trained, and getting them out into the workforce,” foundation CEO Bill Kennedy said, according to the college.

The April event also included a lunch and learn, with the food covered by the sponsors. MSU-Billings City College students could recount their work, and Sampson said she felt it solidified the crowd’s desire to support the college program and the MCRA. They could see the young lives the school impacted and realize the program’s work would trickle down to the industry at some point, she said.

The trade show will be bi-annual, Sampson said. That way, it’s a big deal, vendors have time to breathe, and the numerous small businesses that make up the Montana industry aren’t hindered by the logistics of travel in the large, rural state, she said.

The success of the Montana event provides a model for other trade groups willing to put in the effort.

Sampson said she began playing around with ideas for the show two years ago, and it was a “solid 18 months worth of work,” with the trade show consuming her life for the past six months.

Sampson said she was happy to give her paperwork and notes to any other state trade groups looking to replicate the ambitious Montana event.

“I’m happy to walk them through my crazy thought process,” she said.