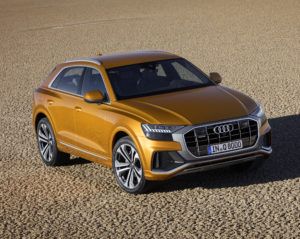 The exterior of the Q8, which goes on sale in the U.S. in the fourth quarter, is all aluminum except for a steel hood, based on an Audi diagram on the company’s global media site.

“The side panel as well as large areas of the floor, the rear wheel housings and the roof consist of aluminum plates, just like the frameless doors, the front fenders and the tailgate,” Audi wrote in a Monday news release. “They make up 23.7 percent of the body-in-white.”

The body-in-white is 14.4 percent hot-formed steel (which is often ultra-high-strength steel), primarily in the driver- and passenger-side door rings and transmission tunnel.

“(Hot-formed steel parts) are used in the lower section of the bulkhead, in the side sills, the rear longitudinal members, the B-pillars and the front zone of the roof frame,” Audi wrote in a more detailed look at the body. “In some areas, Audi uses blanks with tailored, variable wall thicknesses between barely one and a good two millimeters (0.04 and 0.1 in). These tailored blanks combine low weight with high strength.

Another 15 percent is cast aluminum, including the suspension strut towers and the connections between sills and longitudianal members.

“2.4 percent is due to the aluminum profiles that make up the front sections of the longitudinal members,” Audi wrote.

The bumper beams and door inners are also aluminum, including the door inner reinforcement beams.

The Q8’s curb weight tops out at 4,728.9 pounds with a mild hybrid powertrain configuration is used, according to Audi. That’s lighter than the current-generation Audi Q7, which is 2.6 inches taller but 1.1 inches thinner. 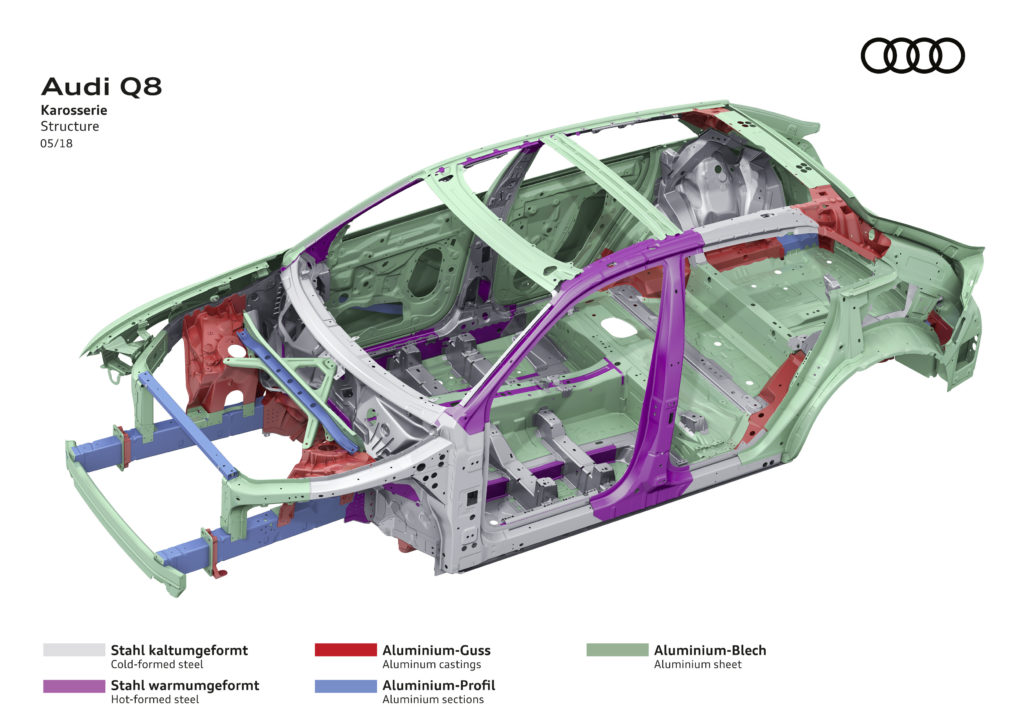 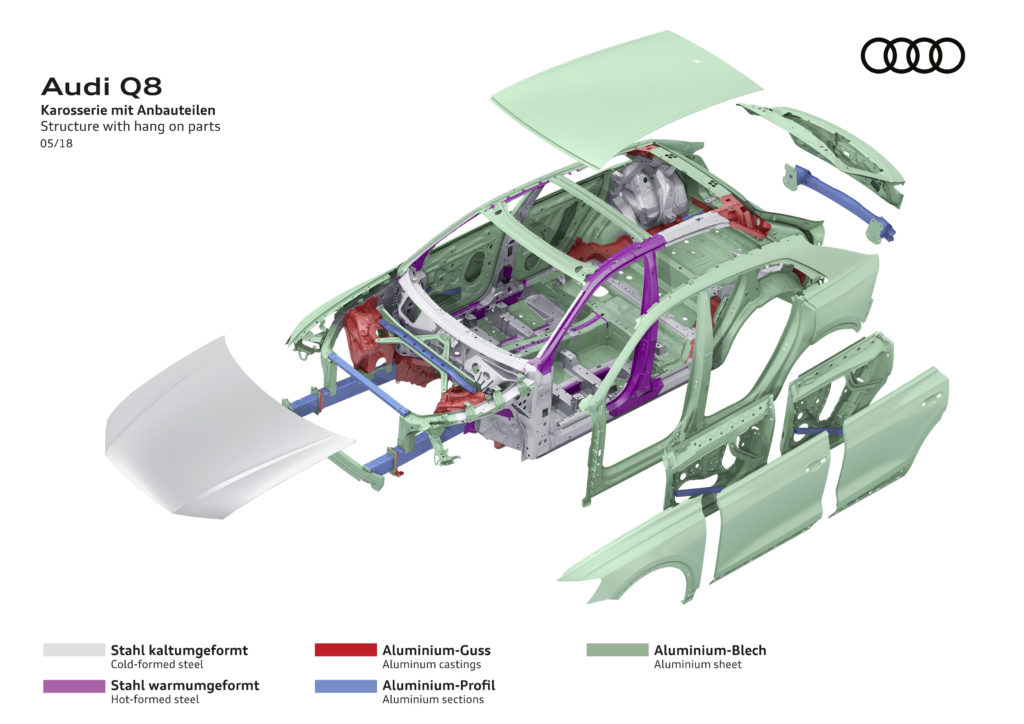 “With its high level of stiffness, the body of the Audi Q8 provides the foundation for top workmanship, is excellent for background noise and has sporty, precise handling,” Audi wrote. “Designed with the Audi Space Frame concept, it contains numerous lightweight aluminum and hot-formed steel components.”

Audi also reported it figured out a new way to handle the torsion rings that let the OEM “eliminate the C-pillar without sacrificing comfort or safety.”

“Integrated into both the front and rear ends, they are the foundation for the precise handling of the SUV coupé, be it fast and agile driving on paved roads or when driving off-road,” Audi wrote. “… In a head-on collision, the three stress planes in the front end absorb the forces. The reinforcements of the longitudinal members have variable wall thicknesses, which leads to controlled deformation.”

Many of these design elements are likely going to be replace-only.

Other exterior elements of note to repairers:

• The notably “frameless” doors can receive optional acoustic glass, according to Audi. The OEM also gives a double-layer windshield standard — and will provide an optional version that can be heated if a customer desires.

• Electrical opening and closing of the tailgate is standard, and the option exists for “foot gesture” operation as well. An automatic electric luggage compartment cover also can be purchased as an option. “Guided on rails, it automatically retracts when the tailgate is opened and is extended again upon closing,” Audi wrote.

• Both versions of the headlights use LEDs, with the optional HD matrix edition comprised of 24 individual LEDs.

“In connection with the HD matrix LED technology, headlights and taillights do not only feature the dynamic turn signal, but are also set in scene impressively during locking and unlocking,” Audi wrote. “Their harmonious interplay gives the SUV a dynamic character. Q8 owners can use the myAudi app on their smartphone to activate various lighting functions and experience them from the outside – a unique feature in the competitive field.” 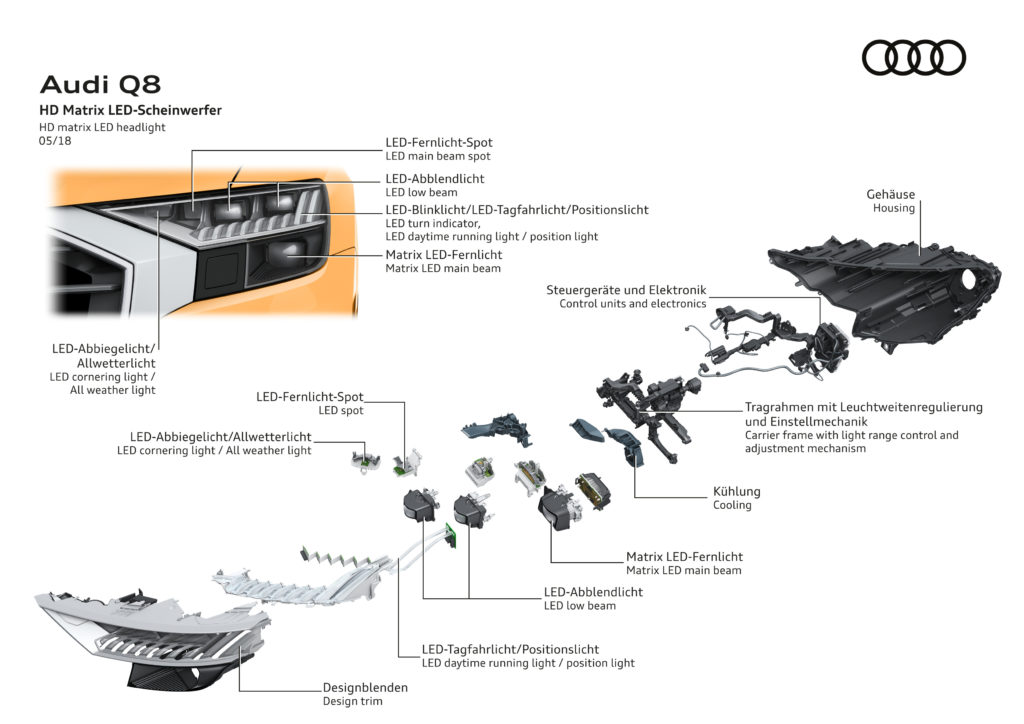 • An optional colored mask can connect the “Singleframe” front-end design to the headlights.

• The Q8 has 12 color options, including “dragon orange and galaxy blue” as new colors.

• Attachments can be painted body color or “scandium gray” in optional packages, and “In the S line exterior package, matt grays further increase the effect of the Singleframe, the blade, the sill trim and the diffuser insert.”

Other highlights possibly of interest to collision repariers:

Not surprisingly for a high-end luxury vehicle, the suspension and chassis can be quite fancy and likely will require some calibration and special care from collision repairers.

• For example, optional all-wheel steering can turn the rear wheels as much as 5 degrees and adapt to steer either opposite or in the same direction as the front wheel depending on the vehicle speed. Another suspension option can be adjusted to four modes, hiking the car’s ride height by as much as 3.5 inches.

• An “electronic chassis platform” notes the car’s angle and shows it to the driver. Hill descent control provides autobraking help at inclines steeper than 6 percent and serves as a cruise control for speeds up to 18.6 mph while the driver focuses on the off-road terrain.

Also not surprisingly for a high-end luxury vehicle, there is a lot of advanced driver assistance safety technology here.

• Audi offers four ADAS packages. The “Tour” option features “adaptive cruise assist, which comfortably provides longitudinal and lateral control in all speed ranges” — keeping a safe distance from other vehicles and within the vehicle’s lane as well as “taking into account the speed limit.” That package also “automatically adjusts to the current speed limit, reduces the speed before corners, during turning and on roundabouts.”

• Another system detects driver inactivity and warns them to pay attention; if the driver doesn’t, the SUV “automatically stops it in its own lane” (hopefully, it pulls over) and activates the Audi pre-sense process, which includes pretensioning the seat belts. 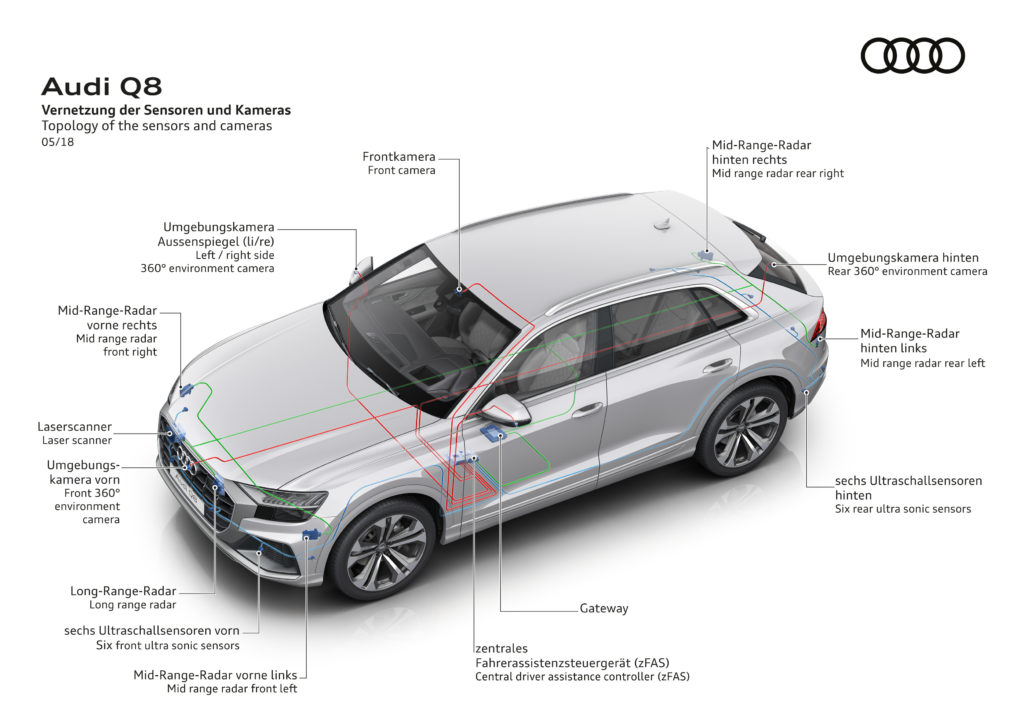 • Another package on the Q8 can spot front and rear cross-traffic and automatically brake itself for frontal threats. (It appears to hit the brakes to warn the driver of a threat from behind but doesn’t truly autobrake for rear cross-traffic.)

And get a load of the “pre sense side” feature, which is part of that city package:

Audi pre sense side reacts in the event of a collision from the side. It uses data from the radar sensors used by the intersection assistant to calculate the probability of an accident involving traffic approaching from the side. The system can detect the threat of side collisions at speeds of up to approx. 60 km/h (37.3 mph) and apply preventative measures to help protect occupants. These include: activating the hazard lights, tensioning the safety belts (reversible), optimizing the seating position, and activating the closing process for the optional panoramic glass roof and windows.

In an impending lateral collision at more than 25 km/h (15.5 mph), the suspension actuators of the optional Audi AI active suspension raise the body on the side exposed to the danger by up to 80 millimeters (3.1 in) within half a second. The other vehicle therefore hits the car in an even more impact-resistant zone. The side sills and floor structure accommodate a large portion of the impact forces. Deformation of the cabin and the loads acting on the occupants, above all to the chest and abdomen areas, are reduced by up to 50 percent compared with a lateral collision with no raising of the suspension. (Emphasis ours.)

It will be vital the repairer restores the functionality on this system given the increased safety available.

• “The systems in the Park plus assist package, which will be added to the range later on, support the driver during maneuvering,” Audi also wrote. “Maneuvering assist counteracts imminent collisions with small steering impulses and independent braking to a standstill, for example when detecting pillars in a multi-story car park. Curb warning protects against damaging the rims during parking. Several images from the surround cameras allow precise maneuvering down to a centimeter and provide a view of crossing traffic and a detailed view of the wheels.”

• Audi also offers “trailer assist,” which can steer the Q8 and trailer in reverse. 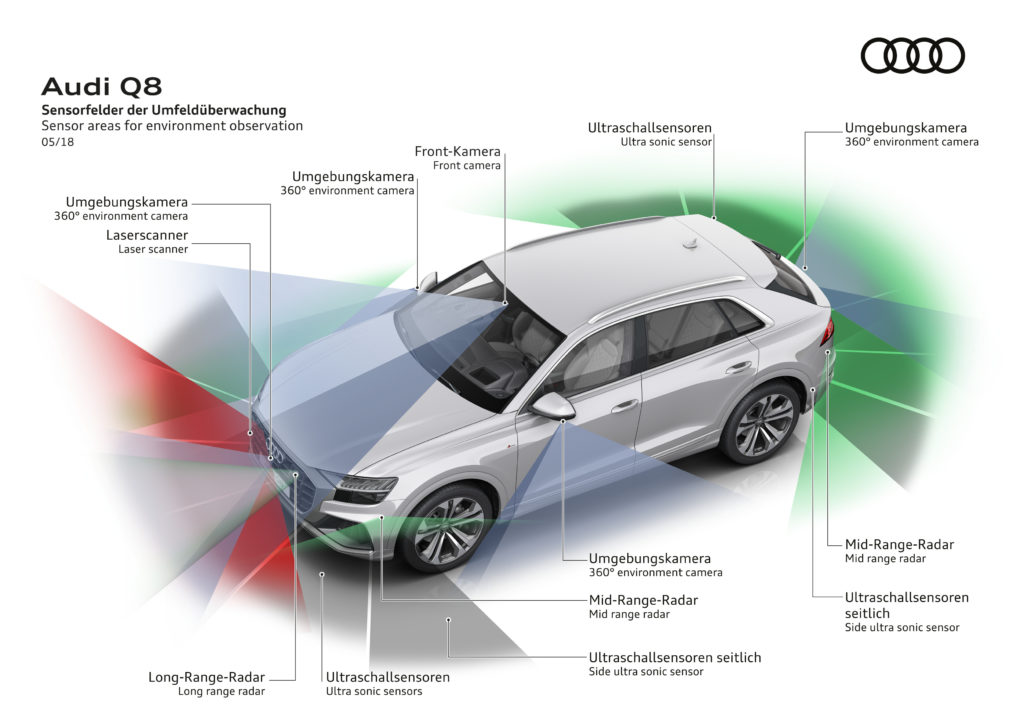 • All of Audi’s ADAS are governed by “a computer the size of a tablet PC that is mounted under the driver’s seat – the standard central driver assistance controller (zFAS). It continuously computes a differentiated model of the surroundings. This central environmental model enables the assist systems to react precisely and in good time to objects, such as by initiating braking. Navigation also becomes highly precise, because the sensor data fusion locates the driver’s car down to the exact lane.”

Repairers will encounter a ton of sensory equipment depending on the Q8’s options, including a notable self-cleaning addition in the front of the vehicle.

“Depending on the selected options, the zFAS receives the data to do this from up to five radar sensors, six cameras, twelve ultrasound sensors and the laser scanner,” Audi wrote.” Mounted in the left section of the Singleframe, the latter covers a field about 80 meters (262.5 ft) in length and a wide angle of aperture of 145 degrees. Within this field, it detects objects with sharp contours, even in the dark. In bad weather, its covering panel is automatically cleaned and heated.” (Emphasis ours.)

Audi last month announced the 2019 Q8, the company’s completely new “top premium SUV” built on a steel-and-aluminum body-in-white. The global media illustration, which might depict a slightly different vehicle than the U.S. version, is seen here. (Provided by Audi)

A diagram of an 2019 Audi Q8 HD Matrix LED headlight is shown. Image from the global media site; U.S. version might be slightly different. (Provided by Audi)

2019 Audi Q8 sensors are shown. Image from the global media site; U.S. version might be slightly different. (Provided by Audi)