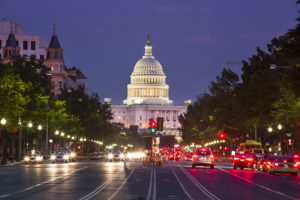 The bill cleared the Senate on Monday. Republican President Donald Trump plans to sign it, based on a statement released Wednesday.

“I applaud Congress for its tremendous, bipartisan effort to reauthorize the Carl D. Perkins Career and Technical Education Act (Perkins),” Trump said in a statement. “In the twelve years since Congress passed the last Perkins reauthorization, the economy has evolved tremendously, becoming increasingly dependent on science, technology, engineering, and mathematics (STEM) disciplines and other skilled labor.  The White House, led by Ivanka Trump, was strongly engaged every step of the way to ensure passage of this critical legislation to provide students and workers the training necessary to succeed in a 21st century economy.  By enacting it into law, we will continue to prepare students for today’s constantly shifting job market, and we will help employers find the workers they need to compete.”

The reauthorization ought to be a win for the skilled trades, and might help pump out more technicians to fill the collision industry’s shortage.

The bill, which takes effect July 1, 2019, includes more than $1.2 billion in spending per year starting with the 2019 fiscal year and increases it to more than $1.3 billion by FY 2024. That’s a change from existing law calling for “such sums as necessary,” according to a joint Monday letter to lawmakers from the Association for Career and Technical Education and Advance CTE — two key vo-tech education groups.

It seems as though such defined funding could be either a positive or negative depending on what kind of mood Congress was in during a particular budget cycle. However, the two vo-tech groups seemed worried:

“S. 3217 now includes specific authorization levels, as compared current law’s ‘such sums as necessary,’” ACTE and Advance CTE Executive Directors LeAnn Wilson and Kimberly Green wrote. “It is important to flag that S. 3217 provides an authorization amount for FY19 that is below the amount proposed in the House Labor, Health and Human Services, Education and Related Agencies’ appropriations bill for FY19. FY18 was the first time in nearly 30 years in which Perkins received a substantive increase. We want to be sure S. 3217’s authorization levels do not dampen efforts to provide our nation’s CTE programs with additional resources to help them catch up with demand and inflationary cuts.”

Senate Education Committee Chairman Sen. Lamar Alexander, R-Tenn., said in a statement the measure took power away from the Department of Education.

“The revamped legislation would eliminate a negotiation process between states crafting goals for their career and technical education programs and the Education secretary, who approves those plans,” Politico reported. “Instead, states would set their goals and the secretary would approve them, assuming they meet the law’s requirements. The bill would also require states to make ‘meaningful progress’ toward their goals.”

“This is an important day for America’s students, workers and our economy,” she said in a statement Wednesday. “Congress came together to expand educational pathways and opportunities and give local communities greater flexibility in how best to prepare students for the jobs of today and tomorrow. I look forward to seeing President Trump sign this bill into law and make yet another important investment in our future.”

Wilson and Green said their groups didn’t have a problem with the requirement to negotiate with the Department of Education.

“States will now have the ability to set their own levels of performance on core indicators, but this comes with the cost of more prescriptive and restrictive provisions on developing and amending targets,” they wrote. “We look forward to working with Committee staff to clarify many of these provisions and processes to ensure the intent behind these provisions and processes is fully understood and does not discourage states and locals from setting ambitious targets. It is also important for us to go on record as having ongoing concerns about the potential unintended consequences of the secondary CTE concentrator definition. While S. 3217’s definition is an improvement over that in the House bill, the definition will result in a shift in data collection in all but three states and potentially result in expanding data collection to include nearly all students in some states.”

“As so many families struggle to find good-paying jobs and so many companies struggle to find skilled workers, I’m proud to work with my colleagues across the aisle to reauthorize and pass this important law that will help our students, workers, businesses, and communities compete in the 21st century economy,” Education Committee ranking member Sen. Patty Murray, D-Wash., said in a statement. “I’m glad we were able push partisanship aside and work together to invest in students and workers by giving them the education, skills and training they need to get better jobs and higher wages—and I’m pleased we able to include accountability measures to help improve programs and ensure students and workers aren’t falling through the cracks. I urge the White House to sign this bill into law as soon as possible to ensure students, workers, and businesses can succeed in our changing economy.”

ACTE and Advance CTE on Wednesday expressed a vision for the bill’s implementation across the country.

“Should the bill be signed into law by President Trump, we look forward to working with Congress to ensure that the legislative language and intent are clear to states and locals and that these federal resources are dedicated to specifically advancing career and technical education (CTE). This includes a commitment to ensure that every learner who chooses to participate in CTE has access to a high-quality program of study and is prepared for both postsecondary education and thriving careers. In addition, the new legislation should not impose on states and locals burdensome administrative requirements.

“As the CTE community looks towards implementation of this new law, it will take the full CTE stakeholder community—including state leaders, educators, administrators, policymakers and employers—working together to set the expectations high and provide the vision, supports and resources to ensure robust and high-quality CTE programs of study. Again, we thank both the Senate and House for their tireless efforts to reauthorize Perkins in a bipartisan manner.”

The two vo-tech groups described in their Monday letter other things they liked, disliked and were wary about regarding the Perkins bill. Among them:

Association for Career and Technical Education and Advance CTE, July 25, 2018