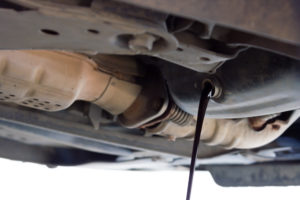 The DEG in April and May drew repairers and insurers’ attention to some masking procedures which aren’t included in Mitchell and CCC labor times, respectively.

Interior masking may be necessary when refinishing exterior surfaces to stop overspray damage that is not prevented by adjacent panel perimeter masking which includes back taping or application of foam tape. Interior masking may also be used when exterior panels (door, hood, etc.) are removed while applying refinish material. The performance of this operation is NOT INCLUDED in the Mitchell refinish labor time. (Emphasis Mitchell’s.) 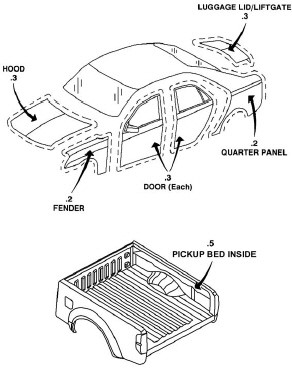 “As always, Material cost are NOT INCLUDED in labor times,” the DEG stressed. It offered this guidance about CCC labor times as well.

A variety of CCC entries involve not-included masking, according to the DEG.

The “Bagging (Cover Entire Vehicle Exterior)” section states, “Published refinish times include time necessary to mask exterior surface adjacent the refinish area to a perimeter of 36 inches, or 3 feet. When the process of perimeter masking is substituted for an entire vehicle bagging procedure, then no additional time should be added.”

If the body shop needs to mask the perimeter and bag the entire car, CCC states a formula of  “Add 0.2 each time a cover is applied and removed” for applying and removing the vehicle cover “may be considered.”

The “Basic Color Coat Application” entry breaks down other masking that is and isn’t included, according to the DEG.

Finally, the DEG explained what to do regarding “roping” in what might be a quote from CCC:

In the event a facility decides roping or “lifting” window seals are best repair option for the vehicle repairs, Published refinish times are for one color applied to new undamaged OEM replacement components, without exterior trim, interior trim or other attached components. Roping or lifting seals would require an on the spot evaluation for labor time if required.

Audatex: Refilling, topping off or draining

The DEG in May called repairers’ attention to how taking care of a vehicle about a quart low would be a not-included operation in certain cases.

“An example would be vehicle with oil, transmission coolers built into the radiator or separate cooler requiring to be disconnected, drained and refilled using the appropriate fluid,” the DEG wrote.

“An example would be having to bleed or purge air out of a cooling/ radiator during the refill process, or filling and bleeding a brake system after opening the fluid lines to disconnect,” the DEG wrote.

Mitchell: Refinishing the underside of a truck bed

The word “Complete” in the Mitchell operation “Refinish Complete Bed Assy Including Tailgate” can be misleading, for it doesn’t include the underside, according to the DEG.

“’Refinish Complete Bed Assy Including Tailgate’” does not include labor to refinish the underside bed assembly,” the DEG wrote of Mitchell in a May tip. “A separate refinish selection needs to be added from the Mitchell database.”

“Depending on the paint manufacturer, the underside refinish may require a flattened or matte clear to be used over the underside color for additional protection. This is not an included operation and the clear coat labor for the underside would need to be manually entered following the clear coat formula in the CEG guide under page 28 Refinish Section.”

Any time you spend accessing OEM repair procedures — as well as the cost to subscribe to each OEM site — isn’t included in any of the three estimating services’ labor times, the DEG explained in May.

“Both labor and subscription cost would require and on the spot evaluation to be added on the repair plan/work order.”

You get a single “standard tint” operation included within Audatex’s two-stage refinish setup, according to a P-Pages entry shared by the DEG in June.

The estimating service defines “standard tint” as “the initial mix, check, one tint cycle, and check.”

“Audatex’s studies revealed instances where additional time was required for the tinting process,” Audatex wrote in its Database Reference Manual. “The range of this additional time was commonly between 0.1 and 1.0 hours with an average of 0.5 hours per estimate per color.

“The appearance of color match can be difficult enough to require both color tint (tinting to adjust the color) and blending. I-CAR Finish Matching (Module 2, Topic 3) recommends planning and preparing for blending before the work begins. Per I-CAR, tinting should be done only to achieve a blendable match.”

Any time you spend accessing OEM repair procedures — as well as the cost to subscribe to each OEM site — isn’t included in any of the three estimating services’ labor times, the DEG explained in May. (Screenshot from www.oem1stop.com)