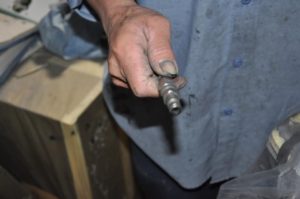 Offering copious photos from real-life shops demonstrating what not to do, a collision repair educator last week described some of the steps and maintenance necessary to keep OSHA happy with your shop.

Here’s some of the guidance Toby Chess, a co-chairman of the Society of Collision Repair Specialists Education Committee and Collision Industry Conference Technical Committee, shared during the SCRS and CIC meetings last week in Atlanta. Learn more with his slides from the SCRS meeting.

Chess remembered going to a shop and asking where building occupants should meet in case of a fire. “Nobody knew,” he said.

Shops must have a fire evacuation plan including a specific spot for employees to meet after evacuation, and staff must be kept aware of this on a routine basis, according to Chess.

He recalled seeing news coverage of a blaze in which which firefighters were killed searching for two missing employees — who turned out to have been safe outside on the other side of the building. The company’s owners were indicted for manslaughter for causing the tragedy with their lack of planning, according to Chess.

Shops also need to have the proper firefighting equipment on hand for situations where staff might be able to take a crack at halting the blaze themselves.

An ABC fire extinguisher can be used to fight Class A (solids), B (liquids) and C (electrical) fires. A special yellow Class D fire extinguisher is what you’d use to fight aluminum or magnesium fires — certainly a possibility given existing and future vehicle lightweighting.

One’s fire extinguisher has to be inspected visually and signed off on monthly by staff and inspected once a year by a certified technician, according to Chess. It also has to be visible from a certain distance, mounted at a certain height and not blocked by all the stuff you’ve got in your shop, he said. A first aid kit needs to “be inspected, proper size (for the facility), inventory maintained proper signage and accessible,” according to a presentation slide from Chess. He said OSHA uses ANSI’s standard here.

The images here show first-aid kits likely to be dinged by OSHA, according to Chess. Your eyewash station also needs to be cleaned, inspected and serviced per OSHA rules so that it protects employees and prevents compounding their problem with an infection by an organism that likes living in stagnant or untreated water. Your electrical panel needs to be pointed out by signage and separated by at least a 4-foot aisle (it must be 3 feet wider than the panel itself) with a marking at least 2 inches wide, according to Chess. Otherwise, it’s a “big OSHA fine,” he said.

Having to move stuff out of the way or wade through it to reach the panel in the event of an emergency requiring shutoff is not the safest environment for employees, after all.

Any panel with 220 volts needs a sign stating “danger,” according to Chess. You also don’t want to fool around with OSHA on missing ground wires (the third prong) on cords. According to Chess, each one is a $1,500 fine.

“No one should be allowed to bypass the grounding pin by bending it out of the way or removing it completely,” OSHA states, according to Chess. “If the grounding pin is missing, the cord must be removed from use, repaired and tested before it is put back into service.”

Containers for hazardous material such as paint need the correct OSHA labeling, including instances in which you’re transferring material from a larger container into a smaller one, according to Chess. He said that any container which will remain in one’s shop longer than a day needs such a label.

These labels can be printed from a product manufacturer or filled in using data from an SDS sheet, according to Chess. Shops should note that OSHA has changed its label format two years ago to comply with an international standard. Each individual container without proper labeling is an individual violation, and Chess said he’s heard the fine is $500 a container in California. “Money wasted,” he said.

OSHA absolutely doesn’t want your techs using their pocket air blowers, according to Chess. They’ll even make techs turn out their pockets and check for them, he said.

“The fine is huge,” he said, noting that compressed air can be very dangerous.

Dorn’s Paint & Body owner Barry Dorn, a former SCRS chairman, called it “the hardest thing” to get his staff to quit using their own personal, OSHA-noncompliant blowers. Collision Consultants Auto Body and Paint manager Sam Zamir said his shop bought couplers with a built-in blower, and Dorn said he had to do that as well to end the issue.

The agency only allows compressed air for cleaning if the pressure never exceeds 30 psi — not the 90 psi often produced by a compressor. The University of Florida states compressed air should never be used on a person’s clothes or body, no matter the pressure. According to the Ohio Board of Workers’ Compensation:

1. Air may be forced through the skin and could result in an air embolism with potential fatal results

2. Air blown at the ears or eyes can result in ruptured ear drums and dislodged eye balls. Particles can be embedded in the ear and eye as well.

3. The noise level of exhausting air can reach levels that may result in damage to a person’s hearing.

4. Particles may be accelerated to a velocity that can result in injury to almost any part of the body. (Minor formatting edits.)

• Compressed air accidentally blown into the mouth can rupture the lungs, stomach or intestines

• Compressed air can enter the navel, even through a layer of clothing, and inflate and rupture the intestines

• Compressed air can enter the bloodstream, and death is possible if it makes its way to blood vessels in the brain

• As little as 12 pounds of compressed air pressure can blow an eye out of its socket. If an air pocket reaches the heart, it causes symptoms similar to a heart attack. Upon reaching the brain, pockets of air may lead to a stroke. (Minor formatting edits.)

A funnel with its lid up is an open container that will get you dinged by OSHA, Chess warned.

Whether oil-lubricated or oil-free, compressors can cause a dangerous level of carbon monoxide, according to Chess. Repairers in PPE breathing that air supply must have a carbon monoxide monitor maintained and checked every 12 months, according to Chess. The devices only have an operating life of a year, but the battery and sensor can be replaced to keep it going beyond that.