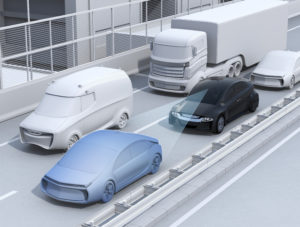 The findings regarding holes in the systems might be of some comfort to shops grappling with the potential impact of the technology on their frequency and severity, particularly those repairers certified by the OEMs studied.

“One of the questions researchers looked to answer is, do the systems handle driving tasks as humans would?” the IIHS wrote Aug. 7. “Not always, tests showed. When they didn’t perform as expected, the outcomes ranged from the irksome, such as too-cautious braking, to the dangerous, for example, veering toward the shoulder if sensors couldn’t detect lane lines.”

The IIHS looked at adaptive cruise control and active lane-keeping, the combination of which essentially lets a vehicle drive itself — though such SAE Level 2 technologies still require the human to monitor the road nonstop. Perhaps the most famous of these combinations is Tesla’s Autopilot, which the IIHS studied in the research announced Aug. 7.

(Level 3 is like Cadillac’s “Super Cruise,” in which the driver can take their eyes off the road safely until the vehicle signals it needs a hand. This is ideal for highway driving; you merge onto the freeway, hand control over to the car, and then are permitted to check out until the car signals your off-ramp is approaching.)

The IIHS first tested how well the autobraking performed when they drove without adaptive cruise control at all. The 5-Series, E-Class and S90 all stopped successfully at 31 mph before they hit a stationary target, while the two Teslas failed to stop in time. However, it’s important to note that both Teslas still rate “Superior” under the IIHS’ usual 12 mph and 25 mph autobraking tests.

“With ACC active, the 5-series, E-Class, Model 3 and Model S braked earlier and gentler than with emergency braking and still avoided the target,” the IIHS wrote. “The cars slowed with relatively gradual decelerations of 0.2-0.3 gs, braking in the same manner no matter the distance setting. Braking before impact was earlier for the Teslas than for the 5 series and E-Class.”

The Volvo S90 slammed on the brakes harder than the other competitors in both these tests and the autobraking-only test, reaching 1.1 Gs 1.1 seconds before striking the target during the three cruise-control runs.

Even though all five stopped in time for the target, their owners manuals all warn that this isn’t always going to happen in the real world when a stopped vehicle appears in front of the cruise control’s sensors.  When the IIHS took the vehicles off the test track and onto actual roads, “engineers noted instances in which each vehicle except the Model 3 failed to respond to stopped vehicles ahead.” “At IIHS we are coached to intervene without warning, but other drivers might not be as vigilant,” IIHS senior research engineer Jessica Jermakian said in a statement. “ACC systems require drivers to pay attention to what the vehicle is doing at all times and be ready to brake manually.”

Similar results as the earlier tests — a sharper stop on the S90 and a smoother deceleration with the others — occurred under a simulation in which the cars followed an actual vehicle which changed lanes to reveal a stationary object 4.3 seconds ahead.

Finally, all the cars did fine under a test in which the lead vehicle slowed to a stop and then decelerated, according to the IIHS.

Though the Model 3 always stopped for stationary vehicles in the real world, the IIHS noted that the car seemed too cautious, stopping 12 times for tree shadows, a vehicle in the other lane, or a vehicle passing through an intersection “far ahead.”

“The braking events we observed didn’t create unsafe conditions because the decelerations were mild and short enough that the vehicle didn’t slow too much. However, unnecessary braking could pose crash risks in heavy traffic, especially if it’s more forceful,” Jermakian said in a statement.

“Plus, drivers who feel that their car brakes erratically may choose not to use adaptive cruise control and would miss out on any safety benefit from the system.”

But while the issues displayed by all five cars could under various circumstances prompt a crash, the IIHS still wrote that adaptive cruise control was “promising” for safety.

“A federally sponsored study found that drivers using ACC have longer, safer following distances than drivers who don’t use ACC,” it wrote.

According to the IIHS, lane-keeping systems have a harder time with curves and hills.

It ran six trials for each vehicle on three different curves, ranging from a tighter 1,300-foot radius to a more gradual 2,000-foot one. The Model 3 aced all 18 runs, while the Model S scored 17 out of 18, overcorrecting on a single curve and crossing the passenger’s side lane marking.

“None of the other systems tested provided enough steering input on their own to consistently stay in their lane, often requiring the driver to provide additional steering to successfully navigate the curve,” the IIHS wrote.

The E-Class went 9 for 17 — though it drifted to but didn’t cross the lane marker in five of the remaining tests and disengaged itself in one instance. The 5-Series was 3 for 16 “and was more likely to disengage than steer outside the lane.” The S90 went 9 for 17, crossing the lane line all other eight times.

The IIHS then gave the cars a shot at attempting hills, performing six more tests each on three inclines with different grades.

The Model 3 was the star here as well, going 17 for 18 and hugging the lane line in the other test. However, the E-Class did quite well, posting a 15 for 18 success rate, hugging the line in another test and “continuously providing steering support without erratic moves when lane lines weren’t visible.” The other three cars “struggled,” according to the IIHS.

The 5-series steered toward or across the lane line regularly, requiring drivers to override the steering support to get it back on track. Sometimes the car disengaged steering assistance on its own. The car failed to stay in the lane on all 14 valid trials.

The Model S was errant in the hill tests, staying in the lane in 5 of 18 trials. When cresting hills, the Model S swerved left and right until it determined the correct place in the lane, jolting test drivers. It rarely warned them to take over as it hunted for the lane center. The car regularly veered into the adjacent lanes or onto the shoulder.

The S90 stayed in the lane in 9 of 16 trials. The car crossed the lane line in two trials and in four trials disengaged steering assistance when it crested hills but automatically re-engaged when the system once again detected the markings.

The IIHS also noted that some of the five test cars would in slow traffic attempt to follow a car in front of them off of an exit ramp instead of continuing on the freeway. According to the IIHS, sometimes lane-keeping systems will take their cue from the lead car in situations where it can’t track the lane lines.

“The evidence for safety benefits of active lane-keeping systems isn’t as pronounced as for ACC. Still, the potential to prevent crashes and save lives is large,” the IIHS wrote. “… Lane-departure warning systems (which merely alert the driver rather than try and actively steer the car) are associated with an 11 percent reduction in the rates of single-vehicle, sideswipe and head-on crashes of all severities.” The IIHS findings suggest that the mix of vehicles and even the physical characteristics of a repairer’s market might affect the amount of volume potentially lost from the spread of these two systems. How quickly OEMs address the issues raised by the IIHS — and how quickly customers frustrated by such deficiencies deactivate ADAS —  will dictate which vehicles you’ll see less of in your shop.

“Designers are struggling with trade-offs inherent in automated assistance,” IIHS Chief Research Officer David Zuby said in a statement. “If they limit functionality to keep drivers engaged, they risk a backlash that the systems are too rudimentary. If the systems seem too capable, then drivers may not give them the attention required to use them safely.”

The ADAS vehicles which do visit your shop will of course need your best work to calibrate and restore the systems to pre-accident functionality. Any lapse in the fancy technology’s performance — such as those encountered by the IIHS — could lead to the customer (or worse, the government) demanding answers from the OEM or the last shop which handled the vehicle. If the OEM is confident in their engineering — for example, the Model 3 lane-keeping results — then the scrutiny might fall even harder upon the shop.