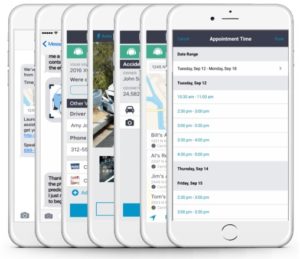 A CCC executive on Wednesday said the company would soon bring to market software to have artificial intelligence write a partial estimate based on a combination of photos and crash details and hand it off to a human.

CCC product management and marketing Senior Vice President Jason Verlen estimated the product would be in the hands of an “initial round of customers” by the fourth quarter of this year. It should be available to the entire marketplace by the first quarter of 2019.

Nearer-term, he also said CCC in May had delivered the capability for one of its existing insurer customers to detect a crash on a telematics-enabled vehicle and send a customer a text asking if they wish to make a claim.

“This is already deployed in the market,” said Verlen, who used to work in artificial intelligence at IBM.

He said “they (the insurer) reverse 100 years” of insurance process by contacting the policyholder, rather than the other way around.

“The customer is simply amazed,” he said. Verlen discussed these and other new CCC offerings related to auto claims artificial intelligence on a CCC webinar Wednesday. He described a total package that started with the loss detection and ends with the customer scheduling an appointment at one of the “authorized” shops recommended by the insurer’s CCC-powered software.

Some of these developments had already been announced by the information provider. In April, CCC said it was launching the ability to detect damage on a vehicle from a photo and make the wounds more visible to consumers by overlaying “heat maps.” The same month, the IP confirmed that insurers were using Smart Total Loss to make repair-or-scrap decisions based on a computer analysis of a photo.

The entire suite allowed an insurer to leverage A.I. in a consumer-facing format, a focus necessary to make the technology relevant, according to Verlen.

After the technology detects a crash and contacts the customer (presumably with one of the chatbots that Verlen earlier in the webinar said allow an A.I. to scale) it asks the customer to send a single photo of the vehicle. From that photo, CCC Smart Total Loss in “3 seconds or less” can determine if the car is repairable or a total and notify the customer through text message (presumably another chatbot) or an actual phone call of the decision.

“We let them know what the judgement is,” Verlen said.

If the car is repairable, the customer is asked to take more photos and helped to do so by the software. Verlen noted that the request for more images isn’t made until after the car is deemed repairable; otherwise, “that wouldn’t be a good user experience,” he said. With guidance from the software on camera position, the photos will be of sufficiently high quality to prepare an estimate, Verlen said. Consumers these days take photos of their dessert, he joked, and it’s “very natural” to whip out a phone and take some shots, he said.

The software then recommends auto body shops and asks if they’d like to make an appointment at one — enabling them to do so with a menu, just like OpenTable.

On the back end, telematics might deliver the insurer an estimate of the vehicle’s change in velocity (delta-V) and direction of force to predict the occupant’s injuries and medical procedures, Verlen said.

All of these features are in market “or will be by the end of the year,” according to Verlen. It was unclear when in this process the customer would receive the initial estimate developed using their photos.

Verlen said CCC artificial intelligence fused with estimating logic would use photos and collision information to produce a partial estimate. However, the CCC customer could interact with the estimate using a blue pen icon — something Verlen and a CCC spokeswoman suggested was a necessary step.

The adjuster would for example select a particular part that the A.I. said should be replaced. The software would suggest parts that must first be removed to access the component in question, and the human could opt to add that work, according to Verlen.

This improves estimate writing efficiency by “quite a factor,” Verlen said. Verlen indicated this human input was necessary to avoid one of the major pitfalls with artificial intelligence: a “2001: A Space Odyssey” scenario where humans place “too much trust in A.I.” at their peril.

Declaring, “‘Mr. A.I., you go do the estimate,'” and blindly accepting the results  would be a “bad idea,” Verlen said. The system invites the human to participate, he said.

CCC spokeswoman Michelle Hellyar discussed an A.I.-human partnership on the estimate as well in response to a question about the quality of the A.I.’s data set of CCC estimates. We’d pointed out that a CCC analysis of diagnostics rates postulated that numerous shops were scanning cars but not putting the operation on estimates. This suggested an artificial intelligence trained using those estimates might erroneously conclude that scanning often wasn’t necessary.

“CCC won’t automatically populate an entire estimate or predict the total cost of repair,” Hellyar wrote in an email. “The estimating functionality discussed today will be able to predict which parts are damaged and pre-populate estimates with damaged parts. As you heard in the session today, after this the human takes over using the ‘blue pen’ to work on the estimate.”

CCC’s entire suite avoids a separate major A.I. issue with “transparency,” in this case with the heat maps, according to Verlen. If CCC’s AI couldn’t detect damage on the vehicle, it’d have no product. But if it couldn’t prove to the user that it detected damage, the system would have “absolutely no credibility,” he said.

Allowing the user to see for themselves that the computer was really noticing damage built that credibility and avoided the mistrust that was a third A.I. hurdle to overcome, he suggested. “Research shows that 9 out of 10 consumers prefer estimates when delivered with heat maps that clearly highlight the damage versus estimates delivered without heat maps,” CCC wrote in April.

Verlen recalled the old claims process of a customer getting three estimates from three different body shops. Inevitably, all three are going to be different, he said. For an A.I., that’s a major issue, he said — which of these was the software mimicking in terms of accuracy?

But an A.I. which was consistently correct would build trust in a human user and cause the latter to wonder why they weren’t seeing what the A.I. was seeing, according to Verlen. The computer learns from humans using a database of thousands or millions of claims, and humans learn from computers. A “dramatic industry transformation” takes place, he said.

The computer’s already nailing it in terms of total loss prediction accuracy, according to Verlen. Asked about total loss false positives, he said CCC Smart Total Loss had delivered an “extremely high” number of correct answers.

“The prediction is accurate,” he said.

However, the software also allows an insurer to dial in what degree of false positives it’s willing to accept in return for the savings caused by greater efficiency. Verlen suggested that eating a few losses from the A.I. mistakenly totaling repairable vehicles might still lead the insurer to come out ahead financially through the overall greater efficiency of the system.

Using stricter parameters will identify fewer total losses up-front, but those which are flagged will be “dead-on accurate at almost 100 percent,” said Verlen, who elaborated that this batting average was “95 percent-plus” accuracy.

That degree of precision can be reached by dialing the system to detect “50 percent of the total losses,” he said. Attempting a less conservative 100 percent becomes “a little bit less accurate,” he said.

CCC can even run a simulation using an insurer’s past total loss data to determine a good threshold, he said.

CCC in a webinar Aug. 15, 2018, described a total package that started with an insurer detecting a crash on a telematics-enabled car. (Provided by CCC)

CCC in a webinar Aug. 15, 2018, described a total package that started with the loss detection and ends with the customer scheduling an appointment at one of the shops recommended by the insurer’s CCC-powered software. (Provided by CCC)

A CCC executive on Aug. 15, 2018 said the company would soon bring to market software to generate a partial estimate based on a combination of photos and crash details. However, a spokeswoman wrote human input using the “blue pen” icon at right was still necessary. (Provided by CCC)

Armed with telematics, CCC can deliver the insurer an estimate of the vehicle’s change in velocity (delta-V) and direction of force to predict the occupant’s injuries and medical procedures. (Provided by CCC; redacted by Repairer Driven News)

CCC’s AI damage detection system examined the damage on this Getty Images photo and represented what it detected as a heat map. (Provided by CCC/Getty Images)

CCC in a webinar Aug. 15, 2018, described its Smart Total Loss as being highly accurate at predicting total losses based on a single photo. (Provided by CCC)