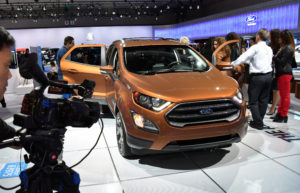 Ford on Thursday confirmed it had experienced replacement part supply issues with the new 2018 EcoSport subcompact SUV but described working aggressively to address the problem.

The issue was raised with a segment posted Aug. 10 by New York TV station WPIX. According to the article and broadcast, Jackie Valente had bought the 2018 EcoSport just three days before she was struck by a hit-and-run driver.

The SUV had been at AGS Autorama since early June, where owner Pete Sarra had initially estimated about a week of repairs, according to WPIX. However, Ford couldn’t provide the fender, bumper, brackets and “most of the other parts needed to repair the front end,” WPIX “What a Shame” reporter Arnold Diaz said.

Ford had promised the components would be available by the end of August, Sarra told WPIX during the broadcast. The Aug. 10 article contains an update that Ford has the bumper and fender ready but not yet the brackets.

Sarra told WPIX he’d never experienced such a situation in his more than 20-year career and wondered if it had to do with the newness of the vehicle.

Ford had refused to pay for a rental car after Valente’s insurance rental time expired — and suggested she “drive the car around the way it is,” Valente told WPIX. Ford didn’t comment to the station, but after its inquiry, the OEM told Valente they’d take a look and “‘see'” about her rental car receipts, she told WPIX.

Referencing the WPIX story, we asked Ford if other collision repairers should expect parts shortages with the EcoSport, which has already sold 28,964 units through July and seems to be popular. An IHS analyst had forecast Ford would sell about 60,000 in the U.S. in 2018, Forbes contributor Neil Winton reported in February.

Ford’s response suggested the parts issue was related to the international model coming to the U.S. for what the Detroit Free Press said was the first time. The OEM described alleviating the problem with steps including drop-shipping to repairers.

“Unfortunately, we have faced some challenges with EcoSport service part supply given the newness of the global supply base supporting this vehicle in the US market,” Ford said in a statement. “We are working with our supplier partners and transportation providers to resolve these concerns as fast as we can – this includes having parts shipped direct from our suppliers to support our customers and airfreighting material to our US distribution network to speed the resolution of our parts shortages.”

In the near-term, it sounds like repairers, insurers, customers and Ford are going to want to huddle up and work together on the most efficient scheduling for EcoSports based on parts availability and driveability (obviously, if the SUV’s unsafe, it must be benched regardless). Otherwise, they risk unnecessarily tying up profitable shop space, increasing insurer storage and rental bills and burning through a customer’s rental days and producing bad CSI mojo for the shop, insurer and Ford.