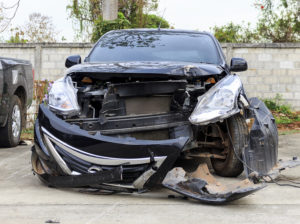 Virtually every front-end collision will involve elements of either a passenger or engine cooling system — and often, this means components must be replaced, rather than repaired, according to the May Collision Hub “Repair University Live.”

The show primarily focused on the air conditioning system, for repairers tended to struggle with it, Collision Hub CEO Kristen Felder said on the show.

Frequently damaged items include condensers and radiators, CPS Automotive sales and marketing Vice President Chuck Abbot said on the show. Vehicle Collision Experts CEO Mark Olson pointed out that the vehicle seen on the show had an evaporator and lines up front in the line of fire.

Air conditioning lines can’t be straightened if bent by a collision, Olson said. A/C works by expansion, and any bent line creates an additional expansion point and can prevent the system from working correctly, he said. “Any bend at all” should lead to a replacement, he said, for attempting to straighten an A/C line was like “trying to straighten out a copper pipe.” Shops should take care not to bend the lines when storing them during a repair, he said.

If an air conditioning system component looks different after a crash than how it was designed to appear, replace it, Abbot said.

Radiator tubes are designed to move and are rubber, so bending there is fine, Olson said. However, transmission cooling lines aren’t supposed to bend and must be replaced if they do, he said.

A system still containing refrigerant is pressurized and considered closed, Abbot said. The absence of refrigerant suggests the system is open and can receive outside air and moisture, he said.

Most OEMs — “all but Toyota” — will insert dye into the system, and if an particular ultraviolet light reveals the presence of such dye on the exterior of parts, the system is “absolutely” open, according to Abbot. (Your curing ultraviolet light won’t work for this purpose, according to Abbot and I-CAR curriculum and product development director Josh McFarlin; it’s a different wavelength.) The shop knows it must change the desiccant and refill the refrigerant, and it can start disassembly without recovering and recycling the refrigerant, he said. Leak detectors are also available to check for an open system.

“Just cause you see dye … doesn’t mean there’s not pressure,” Olson said. The leak might only be a small one, so don’t just walk up to the vehicle and “press the button,” he said. Releasing refrigerant into the atmosphere is illegal, he and Abbot said.

The desiccant is in a small bag and works to collect moisture during normal air conditioner use, according to Abbot. It’s like those “Do Not Eat” silica gel packs you find within boxes of typical consumer products.

The desiccant has a certain moisture absorption capacity, and an open system introduces additional moisture that pushes the system to its threshold sooner, according to Abbot. He said CPS advises that “if it’s open, go ahead and just replace the desiccant.”

Felder said Mitchell’s air conditioning R&R guidance even says an open system needs a new receiver drier for this reason, while other sources say this would only be necessary if the system was only open for 24 hours.

Failure to replace the part containing the desiccant risks other elements of the car’s air conditioning, according to Abbot. Moisture interacting with the refrigerant can degrade the oil and create acid that could corrode or damage the compressor, he said.

“It’s not good for the inside,” he said.

The compressor is the most expensive component within the system, according to Abbot. 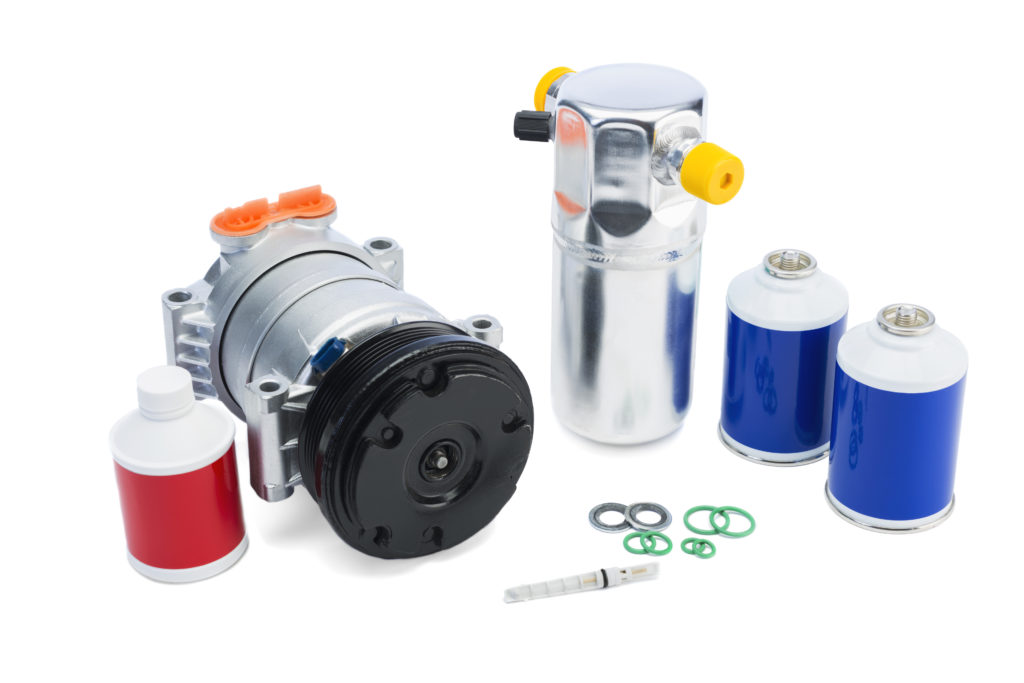 Oil moisture is destined to “take out your compressor,” McFarlin said.

Enough moisture in the desiccant starts circulating, according to McFarlin. It travels through the system and can plug the condenser, take out the compressor and might even make it to the evaporator, he said.

“Now you’ve got an entire system failure because you didn’t replace the desiccant,” McFarlin said.

Olson and Abbot likened the issue to a diaper: Fill it with liquid, and it expands — and ultimately starts leaking.

Here’s how it might go down in your shop if you fail to address this issue:

Felder said she had a few calls as an adjuster where a shop fixed a vehicle during the winter, and the customer returned later in the year to complain the compressor was dead. “I might have owed some claims there,” she said.

Olson said often a shop will fix a crashed car in winter and recharge the system. As they failed to swap out the desiccant, the A/C works until about June or July, when the customer is using it heavily. The customer brings the vehicle to the shop, which recovers and recharges the refrigerant. The system works another six months until it quits again.

“That accumulator, receiver, drier is saturated,” he said.

I-CAR OEM technical relations manager Scott VanHulle said many technicians misunderstand and mistakenly conclude a vacuum will remove all the moisture from the overfilled desiccant. Thinking that another 20 minutes on the vacuum will do the trick is erroneous, he said.

What can you actually repair on an cooling system? Not much.

Abbot said repairers can comb fins on a condenser, and McFarlin said they could on a radiator. However, Olson said a shop shouldn’t paint a condenser after combing it to make it more aesthetically pleasing. The new coating might interfere with the part’s ability to exchange heat, he said. He indicated shops shouldn’t be painting radiators either.

The recoring some radiator shops do is possible, but it’s going to be an aftermarket repair, Olson said. That raises issues of quality, such as the number of fins on the aftermarket core matching the OEM original, he said.

Repairing something plastic like a mounting tab might be OK, but on the actual system, “we pretty much aren’t doing anything,” he said. Felder noted that this wasn’t actually pre-loss condition, and the customer would see the repaired tabs. 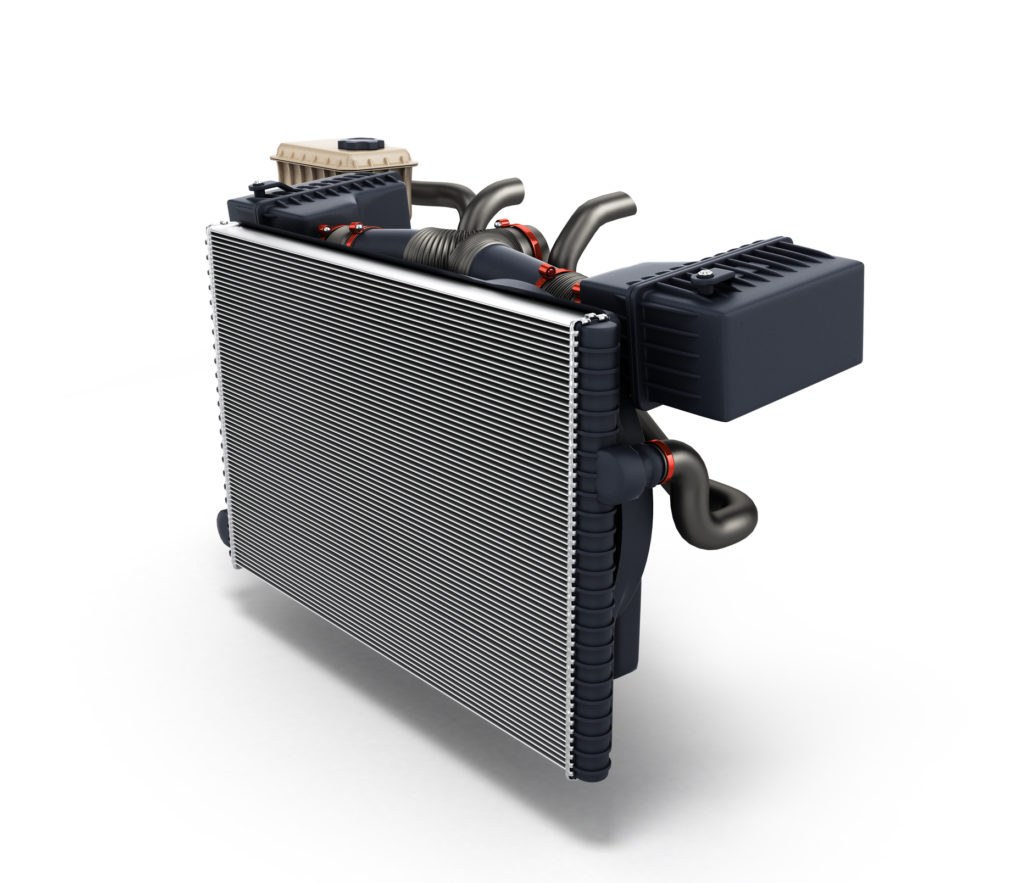 Olson said “anything under pressure” is off-limits for plastic repair. He noted that a plastic weld might look fine cosmetically but be unable to handle the pressure a new part could.

Such plastic repair — such as in a tank or holding tank — raised “liability” issues and should be avoided, Felder said. Such a repair failure strands the customer or means the shop must buy them a new engine, she said.

Felder recalled time spent looking at cooling comebacks. “That is a really guaranteed way to upset your customer,” she said.

Virtually every front-end collision will involve elements of either a passenger or engine cooling system — and often, this means components must be replaced, rather than repaired, according to the May Collision Hub “Repair University Live.” (Memorystockphoto/iStock)

I-CAR curriculum and product development director Josh McFarlin said on the May “Repair University Live” that failure to replace an accumulator containing desiccant on an open air conditioning system could ultimately kill the compressor. (cmannphoto/iStock)

A 3-D rendering of a radiator. (NosUA/iStock)