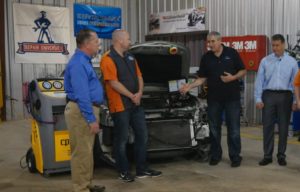 A cheap, easy and quick air conditioning certification now for employees will prevent your shop from eating EPA fines nearing $40,000, according to experts on a spring “Repair University Live.”

Vehicle Collision Experts CEO Mark Olson said on the Collision Hub show that an Environmental Protection Agency representative told him that the mere act of unbolting and rebolting a condenser constituted servicing an A/C system in the eyes of the agency. Even if someone else actually performed the actual A/C work, such as draining or recharging a system, the tech doing the R&R needed to be credentialed as well, according to Olson.

“Any person who repairs or services a motor vehicle air conditioning (MVAC) system for consideration (payment or bartering) must be properly trained and certified under section 609 of the Clean Air Act by an EPA-approved program,” the EPA’s website states. “All technicians servicing MVAC-like appliances must be certified.”

That means teardown and assembly technicians need to be certified, Olson said. Otherwise, the fine is $37,500 per technician per day for any staff caught working on the air conditioning without their Section 609 certification, according to Olson. An EPA fines list indicates the amount might have adjusted with inflation to at least $38,892.

Olson recalled a situation where an uncertified shop employee touched the refrigerant line with a screwdriver. The EPA representative pulled out his ticket book, he said.

The EPA will check to see if the technicians have their Section 609 certification documentation, such as the wallet-sized card provided upon completion, on hand, according to CPS Automotive sales and marketing Vice President Chuck Abbot. Olson likened it to a driver’s license.

If you don’t have your card, “get certified again,” Abbot recommended.

This requirement has been in place since 1992, when the U.S. adopted the Montreal Protocol environmental policies.

Starting Jan. 1, the EPA also required that any shop buying more than two pounds of R-1234yf refrigerant have at least one Section 609-certified technician. Abbot said the average vehicle had about 11 ounces to 2 pounds of refrigerant.

Collision Hub CEO Kristen Felder said “I would have every tech in the shop” and possibly even estimators get certified. She said it’s $20 and an open-book test, and Olson predicted everyone watching the show could get certified in two hours.

The technician needs to keep the information on hand. Felder noted technicians like to cycle between shops and can forget to bring paperwork. A shop owner hiring one must ensure any hires have their card.

The information isn’t in a database accessible on the fly when the feds appear, according to Felder. “This isn’t how this works,” she said.

Certification is good for life (as long as you can produce the card). However, a representative of environmental compliance consultants and certification vendor KPA said a technician who certified on older refrigerants like R-12 years ago might want to recertify anyway.

Felder said repairers should check on their state’s environmental laws for additional considerations.

One’s air conditioning equipment needs to be certified too under the Section 609 regulation, according to Felder and Abbot. (Abbot also noted some states might have additional environmental requirements.) Abbot said the equipment must meet the Section 609 requirements and SAE standard, noting that his company can’t sell a machine without SAE certification.

If you’re “looking at that Chinese unit,” it’s probably not certified, Abbot said.

CPS will provide a letter when it sells you an A/C machine that a shop should send to their local EPA office so they have it on file, according to Abbot. Felder said she advised sending it as a certified letter, which offers a shop proof the agency received it should a regulator dispute this.

Olson noted that the letter also declares the shop’s technicians are performing air conditioning service, and he and Abbot joked that this tips off the EPA to a location they can inspect for violations.

Felder said the equipment certification documentation might not be done by many shops, and Olson wondered if MSOs think to verify this when they buy a location and its equipment.

“That’s where we’re seeing the enforcement,” Blake said in late 2017. It’s possible that the EPA might first catch a shop for an uncertified piece of A/C gear and then start checking up on employee certifications, scrutinizing multiple repair orders, she said then.

Like tech certification, once the owner has fulfilled his or her obligations on a single piece of equipment, the shop never has to recertify it or certify any other A/C devices, according to the agency. But Blake said last year shops will neglect to certify any gear, despite the “big huge red envelope” encouraging them to do so on new equipment. In fact, KPA will find the envelope “just hangs there, on the machine. That’s very common,” Blake said then.

Vehicle Collision Experts CEO Mark Olson said on a May “Repair University Live” that a technician couldn’t work on an air conditioning system (even just R&Ring a part) without Section 609 certification. (Screenshot from Collision Hub video)