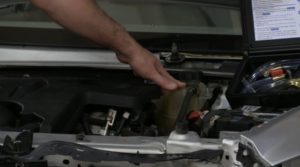 Avoid irritating your customer — or worse, having to buy them a new engine — by using the proper coolant and properly pressure-testing the system, experts advised on the May “Repair University Live.”

“That is a really guaranteed way to upset your customer,” she said. Get this one wrong and the customer won’t trust you, she said.

Worse, you could be buying them whatever improperly cooled parts failed.

Overflow is a “more dated” system generally found on older vehicles, and isn’t a sealed system — a container collects what spills out of the radiator during expansion, he said. Expansion cooling is a sealed system, McFarlin said, and Vehicle Collision Experts CEO Mark Olson said that the pressurization of the network, including the expansion tank, restricts repairs that the traditional overflow format permitted.

Knowing how to complete a proper repair on either is crucial, as shops are destined to encounter such work during their daily operations.

McFarlin said a front-end collision will commonly destroy parts like the radiator, hoses, fans, and possibly the water pump. Internal transmission cooling lines might also be connected to the radiator, Olson said.

Four major types of coolant technology exist, though technically more are available, according to Olson. The OEM procedures will dictate which coolant should be used, CPS Automotive sales and marketing Vice President Chuck Abbot said.

“Keep yourself out of trouble and use that coolant,” he said.

Manufacturers specify a particular coolant based on its properties, how it interacts with metals within the system and how it lubricates different moving parts, McFarlin said, describing a dual role of cooling and lubrication. When an insurer or customer sees a bill for $300 for a specific BMW coolant, there’s a reason why the shop didn’t just “‘go get some Prestone,'” according to Felder.

Olson said that sometimes one will encounter a Toyota which should have Toyota Long Life Coolant, which is colored red, and find an incorrect green coolant inside. A shop or customer screwed up and dumped the wrong one in.

Often, different classes of coolant won’t even mix, which causes problems when a system is topped off with the wrong one, according to Olson. The entire system needs to be flushed, Abbot said.

Shops also can’t dump coolant back into the system after draining it into a galvanized pan, according to Abbot. Many storage pans are galvanized, which will “destoy the coolant,” Olson said.

McFarlin pointed out that the pan also could contain traces of the last substance it collected, implying that it could contaminate the coolant.

He also warned against the introduction of air into the cooling system during vehicle reassembly.

“There’s a big (consideration) with air pockets,” McFarlin said. The cooling system must be filled with “nothing but coolant,” and an air pocket will create a hot spot which can damage the engine “very quickly,” he said.

Olson recalled an instance where a shop replacing a fender on a Subaru wound up buying a new engine for the car after failing to properly reseat the ground wire for the cooling fan.

As technology advances, “you’re cooling a lot more things,” I-CAR OEM technical relations manager Scott VanHulle said, and other show participants agreed. Items like the alternator, turbocharger and battery packs in the rear of the vehicle are being cooled with the same system, show panelists agreed.

The cooling system also has a role in heating the car to operating temperature quickly, McFarlin said. Fuel economy benefits of the vehicle’s design won’t be available until then, he said. Bleeding and filling the system aren’t always included operations in the estimating systems. Pressure-testing the system,

The shop can’t just reach this temperature running the engine in a parked car and deem the cooling system ready, Olson said. Truly testing the pressure means taking the vehicle through its drive cycles as well, he said. Auto body shops fear the liability of driving a customer’s car, but they need to get over that and consult with their garagekeeper’s carrier about how best to perform test drives, Felder said.

Otherwise, you might be “swapping liability,” as McFarlin pointed out.

Vehicle Collision Experts CEO Mark Olson points to the pressurized cap of an expansion tank in a May episode of Collision Hub’s “Repair University Live.” (Screenshot from Collision Hub)