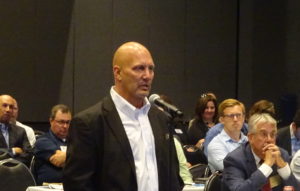 Collision Advice CEO Mike Anderson this month publicly challenged aftermarket scan tools twice, calling them unable to disable vehicle connectivity and likely to affect customer satisfaction when owners started getting alerts. He said he was “vehemently” opposed to them.

Vehicles still connected to their OEMs — a capability which Anderson said could be disabled through an OEM scan tool — during the repair will alert their owner to the work being done on the vehicle, he said during the Atlanta Collision Industry Conference and NACE MSO Symposium.

He presented to the Aug. 9 MSO Symposium audience an example of a 2016 Chevrolet Malibu which mid-repair sent the customer a diagnostic alert that the passenger side headlamp and front turn signal might need immediate service. The repairer hadn’t disabled the vehicle’s OnStar connectivity during the fender replacement.

In another instance, a Lexus RX 350 taken to a car wash generated six emails in a single day, he said.

Another situation arose after his sister hit a deer and took her Lexus to one of the Big 4 shops, according to Anderson. He said he had called the shop and warned them to disconnect Safety Connect. He said the shop blew off his comments, and sure enough, his sister began getting emails related to the work being done on the Lexus.

Anderson confronted the shop again, which claimed to have disconnected the system. A check of Toyota’s repair procedure site TIS proved it was still active. “He was lying,” Anderson said. He encouraged the MSO Symposium audience to start training their staff, noting that the CSI score insurers grade shops upon was bound to plummet when customers began to call the shops about such email alerts.

“We just have to be educated,” Anderson told the Collision Industry Conference audience Aug. 7, noting that he had collected hundreds of examples of such connected car alerts over the past two months.

Bosch strategic accounts director Michael Simon, a guest presenter at the CIC Emerging Technologies Committee session, had earlier that day recommended a “good” aftermarket scan tool able to cover at least “95 percent” of vehicles. (He prefaced the talk by noting that opinions expressed were his own, and not necessarily Bosch’s.)

This led Anderson to “vehemently” disagree and ask Simon if his Bosch tool could detect if a vehicle was connected to the Internet and disable the connection.

Simon said an aftermarket tool was useful in scenarios such as a pre- and post-repair diagnostic test to discover what’s wrong with a vehicle, but no third-party scan tool would cover all scenarios. “It’s not a perfect solution,” he said. Livia Guarnieri, whose firm TROIKA360 works with the Subaru OEM certification program, said Subaru only allows OEM scanners or the asTech, a middleman device connecting the car to remote OEM scan tools. She said the aftermarket scan tools don’t provide Subaru with data it would use in R&D and production.

AirPro operations Executive Director Chuck Olsen noted at the CIC “there are manual procedures” to shut off connectivity in many systems.

He also said that a repairer could also get the job done through the SAE J-2534 option, a technical standard that allows certain aftermarket devices or laptops to download and run the actual OEM scan tool operating system under the “Right to Repair” agreement.

His company’s AirPro works in such a fashion, typically running aftermarket scan software but going the J-Box route and using true OEM software when necessary.

AsTech industry relations director Jake Rodenroth, whose grandfather had the Malibu in Anderson’s anecdote, on Friday said he’s encountered such situations in the field as well.

“To a consumer, that looks foreign,” he said.

Rodenroth agreed with Olsen that manual procedures for disabling telematics exist in some cases, but called it OEM by OEM. For example, General Motors will allow a repairer to pull a fuse to shut off OnStar, but Toyota Safety Connect can only be disabled with a scan tool, Rodenroth said.

He said it all goes back to researching OEM repair procedures for simple items like a battery disconnect. He also pointed out that telematics systems often have backup batteries. This can allow the car to still call for help if a crash takes out the regular vehicle battery — or still send alerts to a customer after a repairer has disconnected the battery.

Rodenroth said a customer could even remotely control a connected vehicle, cycling the locks or running the engine.

Olsen also noted in an interview Friday that a backup battery could keep a connected system operational despite the repairer disconnecting the existing battery (or two batteries, in the case of Mercedes, he noted). He also recalled how the old trick of a logic reset by touching the positive and negative wires together to clear codes wound up killing backup OnStar batteries.

Asking a customer about connectivity should be an interview question at vehicle intake, Rodenroth said. Asked if he saw a lot of connected vehicles in the field after the OEM’s trial subscription period expired, Rodenroth pointed out that the cost might not be an issue if the customer had “Cadillac money.” He noted that if his daughter were a teen driver, he’d probably have it, and “Millennials, I think, will embrace it.”

Olsen said in an interview Friday that he checked General Motors and Toyota repair procedures and didn’t see where a disconnect was mandatory.

“It’s not a repair requirement,” he said, and called Anderson’s opposition a “really reaching comment.”

The issue could be dealt with through customer service, Olsen said.

Ninety-nine percent of customers aren’t going to have a connected car anyway, according to Olsen, calling it “very, very rare.” Even when he worked at a dealership, his experience was that most customers just took their free year but didn’t subscribe past that. Failure of a customer to download a companion app might limit the technology further, he said.

“The instances are just so rare,” he said.

He estimated that if a shop told a customer up front they might get notifications from their telematics system, the response would be “‘Oh, OK.'” It could even be a positive — “‘They’re working on my car today.'”

Olsen stressed that he wasn’t against OEM scan tools — he was for them. He just felt “OEM-sourced” scan tools, which he defined as those with software licensed periodically from the OEM (rather than the real-time, pure-OEM J-2534 option), could be just as capable, and an ace technician with a midlevel scan tool who followed OEM repair procedures would be fine.

Olsen said AirPro’s aftermarket scan tool software has been able to handle some 2019 vehicles, and the issue of capability lag depends on how hard and fast an aftermarket licensee wants to work.

However, a repairer should beware the great deal of cloned and pirated scan tool software on the market, Olsen warned. He recalled once thinking he was buying a GM Tech2 but ending up with a clone.

Collision Advice CEO Mike Anderson presented to the Aug. 9 MSO Symposium audience an example of a 2016 Chevrolet Malibu which mid-repair sent the customer a diagnostic alert that the passenger side headlamp and front turn signal might need immediate service. The repairer hadn’t disabled the vehicle’s OnStar connectivity during the fender replacement. (Provided by Collision Advice; redactions by Repairer Driven News)