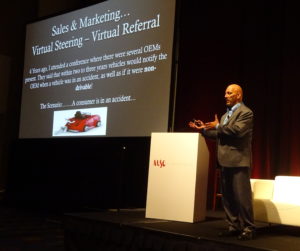 The rise of the OEM “Virtual Referral” to certified auto body shops shops might finally be near, according to data presented earlier this month by Collision Advice CEO Mike Anderson.

Anderson told the NACE MSO Symposium on Aug. 8 that four years ago, he attended a conference in which several OEMs said that within 2-3 years, vehicles would contact them following a crash. The cars would also be able to predict if the damage had rendered the vehicle non-driveable.

General Motors delivered at least part of this vision by 2015, when it announced OnStar would recommend the aluminum-and-steel 2016 Cadillac CT6 to a specialized collision network. The OEM this year announced plans to refer the rest of its fleet to shops on a separate, more mainstream collision network.

Anderson noted that most vehicles made today already have the ability to take a similar action, yet the prediction has yet to come true on a more industrywide scale.

However, his presentation suggested it was just a matter of time. Automakers want to prevent vehicle deaths, and cutting public safety first response times with an automatic alert to the OEM could do so, according to Anderson.

OEMs also want to protect their brands, Anderson said. He cited FCA collision marketing manager Erica Schaefer’s data that 60 percent of customers who have to revisit their body shop with a comeback will sell or trade the car in a year — and 63 percent of those will switch brands.

IHS Markit in a 2017 study referenced by Anderson predicted that 87 percent of all new U.S. vehicles will have telematics by 2022. But there’s a bit of a disconnect here, as Anderson and IHS Markit pointed out. Only 32 percent of the combined respondents in five countries called telematics something they’d be willing to pay to have, and only 29 percent were willing to pay for vehicle Wi-Fi.

Of course, that 32 percent is relative. If you’re a body shop that failed to secure a spot on any OEM repair networks, having a third of your customers referred elsewhere by their own cars would be a pretty big deal.

“Affordability is key to this gaining traction!” a slide in Anderson’s presentation declared, and some of the OEMs he mentioned have shown they can deliver collision detection capability for less than the $484 price point, at least for a couple of years.

After a three-month free trial, OnStar’s Safety and Security plan is about $25 a month, which works out to $300 a year if you don’t pay a lump-sum $249.90 in advance. Hyundai’s Blue Link is gratis for three years and then rises to $99 a year. Toyota’s Safety Connect is free for three years on many vehicles before rising to $80 a year or $8 a month. Though we couldn’t immediately verify this via BMW’s own materials, Hyundai reported BMW’s ConnectedDrive is free for four years before switching to $199 a year.

Anderson also argued that the younger generation is fine with being monitored nonstop. That would seem to make the technology more palatable as well.

Shops and insurers — who also have the opportunity to perform “Virtual Referral” with aftermarket technology — should take note of another couple of stats from the IHS Markit study. Collectively, thirty-two percent of respondents in the five countries surveyed reported they felt roadside assistance was the most important telematics feature, followed by stolen car aid at 28 percent. Automatic crash notification and turn-by-turn navigation tied at 25 percent, according to IHS Markit.

Collision notification is clearly a popular concept. But even the consumers who would buy connectivity for one of the other reasons might wind up with it anyway. According to a Hyundai chart, some of these high-priority systems might be bundled together by an OEM into a single package.

Featured image: The rise of the OEM “Virtual Referral” to certified auto body shops shops might finally be near, according to data presented earlier this month by Collision Advice CEO Mike Anderson. (John Huetter/Repairer Driven News)