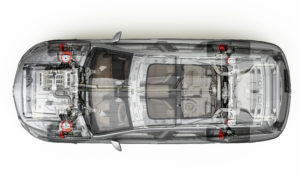 The California Bureau of Automotive Repair has retooled its regulations to emphasize that body shops shouldn’t be identifying parts with nebulous terms like “Opt-OE.”

The BAR had seen a trend of parts being labeled with nebulous terms like “LKQ” or “Alt-OE.” Bowden said such a label “does not meet the requirement” of telling customers what kind of parts are actually being installed.

Bowdon said the agency has the same classifications as OEMs, who hold that parts “‘are ours, or they’re not ours,'” Bowden said. The regulation declares that parts are assumed to be new OEM unless listed “as a non-OEM aftermarket crash part.”

The California Code of Regulations had already demanded that all parts be defined as new, used, “rebuilt” or “reconditioned” for body shops and mechanics and the state Business and Professions Code said the same.

The revised language to state code reiterates the rule applies to both segments of the industry — the original § 3353 seemed to suggest only collision repairers needed to worry about it — and declares that all parts should be assumed to be new unless identified as one of the other three categories.

“Using this requirement as a foundation, the modified regulation enhances the statutory consumer protections by creating a presumption, for use during enforcement and other proceedings, that a part listed on an estimate is new if it is not specifically identified as a used, rebuilt or reconditioned part,” the BAR wrote in its final statement of reasons for the regulations, which took effect last week. “The modified regulation will be easier to comprehend and comply with and will discourage the use of potentially misleading descriptive terms.”

(a) Estimate for Parts and Labor. Every automotive repair dealer shall give to each customer an estimate containing the estimated price for parts and labor for a specific job prior to obtaining authorization. Each part listed in the estimate shall be new unless specifically identified as a used, rebuilt or reconditioned part.

The BAR said it made the changes to Part (a) reiterating that the rules applied to all parts, be they mechanical or collision, after hearing comments from LKQ lobbyist Catalina Jelkh Pareja (Ebenezer SDG Group) and State of California Auto Dismantlers Association lobbyist Gavin McHugh (McHugh, Koepke & Associates).

“Replacing a potentially ambiguous descriptor with explicit terms will make the proposed regulation easier to comprehend and comply with and will discourage the use of potentially misleading descriptive terms,” the BAR wrote in its final statement of reasons for the changes. “The presumption that a part is new if it is not specifically identified as used, rebuilt or reconditioned will help ensure that all parts are clearly and accurately described in an estimate and will enable consumers to make informed decisions prior to authorizing repairs. It is BAR’s intent that subdivisions (a) and (b) require parts listed on an estimate to be ‘new’ if not explicitly listed as ‘used’, ‘rebuilt’ or ‘reconditioned.’ As a result, both subdivisions have been modified so that they contain identical language. This uniformity will make the regulations easier to comprehend, comply with and enforce.”

Tweaking Part (b) to declare that all crash parts must be new OEM “unless specifically identified as a non-OEM aftermarket crash part” was done to address the appearance of terms like “Opt-OE” on estimates.

“As you can see, The BAR concern is that alt/opt OEM crash parts lack a specific definition and could be misleading,” California Autobody Association lobbyist Jack Molodanof (Molodanof Government Partners) wrote in an email Friday. “What exactly is an alt/opt OEM crash part ? Some definitions simply lump together several possibilities of what the part maybe (e.g blemished, slightly damaged, etc) In other cases these parts may not carry the original OEM warranty. In other cases, these parts may not even be OEM. Therefore using terms like opt/alt OEM without a specific and clear definition may be considered misleading and subject the shop to disciplinary action.”

“This was a big topic,” he said. He asked collision repairers what terms like Opt-OE meant, and the consensus was “‘We don’t know.'”

If collision professionals didn’t know what they were buying, how could a consumer make an  “informed decision,” Ramos asked.

“That’s our whole reasoning,” he said. Insurance companies weren’t subject to BAR regulations and could call parts whatever they wanted on their estimates, but it was the “shop’s responsibility” to convey the type of parts customers were receiving in an understandable manner, according to Ramos. However, the California Department of Insurance on Oct. 4 confirmed that insurers also had a similar duty.

Ramos stressed that “there’s a market for everything,” but a consumer should make the decision about what to buy.

Ramos recalled that when he started at the BAR, the agency reached out to the estimating services and told them terms like “LKQ” were “not acceptable” for customer information purposes in the BAR’s eyes. It also frowned on jargon like “R&R,” which a customer might not understand. The information providers were “quite receptive” to this and made changes, but over time, the issue has resurfaced.

He said very few shops on their own write estimates with terms like Opt-OE appearing. It’s typically something contained on an insurer estimate, he said. (This sounds like yet another reason why a shop — the repair professional — should write their own independent estimate and not just rely on the carrier’s.)

We asked about the issue of the “grey market” created by OEM parts. The concern isn’t just the BAR’s point that an aftermarket part could be identified as “Alt-OE” out of a desire to mislead or merely confusion about what to call what is indeed an alternative part. It’s that OEM parts are being sold by vendors outside of the traditional OEM-dealer-shop supply chain and tagged with terms like “Opt-OE.”

With the exception of refurbished OEM parts sold as Opt-OE, the argument is such parts are new or surplus new OEM parts, unable to snag a “new OEM” designation because of their nontraditional channel but not “used” parts either. Unfortunately, while the vendor might be acting in good faith by labeling those parts Opt-OE, the shop has no way of knowing for sure what they’re buying. You’re trusting not just your “Opt-OE” supplier but whoever sold them the parts that the components are truly off-channel new OEM parts, rather than nice-looking recycled or refurbished parts, really good counterfeits, or something sold in another country and imported.

Would Opt-OE parts believed to be surplus or new therefore be labeled “new”?

Ramos pointed out that some manufacturers don’t sell any parts as Opt-OE business at all and take the position that “‘It comes from our dealer, or it’s not from us.'”

The BAR wanted transparency and “full disclosure” to a customer about what they would receive on their vehicle. If a secondary vendor — not the dealership — was selling what they were calling OEM production overruns, say so, he said. A secondary concern would be whether the part had a manufacturer warranty, Ramos noted. (Or preserved the warranty on other components should the part in question fail, we’d argue.) The regulations don’t discuss this topic, but “I think that’s part of full disclosure.” he said.

If what a third-party vendor thinks is new OEM and wanted to label Opt-OE or even new OEM wouldn’t carry the manufacturer warranty, this “should be disclosed” to the customer, Ramos said.

Ramos said that a manufacturer which does sell surplus parts under a separate program might say “‘those parts don’t carry our manufacturer warranty.'” General Motors said it operated in this fashion when contacted a few years ago about its Opt-OE programs.

We asked if the “new OEM” classification could just be limited to anything sourced through the formal OEM channel and retaining the OEM warranty, which would eliminate “grey market” parts being called new OEM. Ramos said he wasn’t sure if it could be defined this rigidly, for legitimate third party vendors might exist. (There’d also be the question of what to do what to call parts sold under a manufacturer’s formal Opt-OE program.)

Ramos encouraged repairers to “just be cautious” when buying something highly discounted.

Bowden said the BAR would do “a little bit of everything” to enforce the regulations, using both customer complaints and audits of shop records. It tries to educate rather than penalize, but sometimes behavior is “beyond educational” and can trigger penalties like probation, criminal prosecution or license suspension.

Asked if the BAR was considering expanding its definition of a “crash part” important for safety because of advances in automotive technology. For example, a plastic bumper fascia suddenly might have an impact on safety because of a sensor located behind it.

“We’re looking at everything,” Ramos said, but he couldn’t share anything specific at this point.

Shops interested in hearing more from the BAR should attend a public workshop Oct. 18, scheduled for after its advisory board meeting.

“The workshop will be focused on the collision repair industry,” Ramos wrote in an email Tuesday. “We will hear feedback from stakeholders on possible regulation updating.”

California Code of Regulations Article 7: Disclosure Requirements for Automotive Repair Dealers (Note: As of Sept. 18 not yet updated to reflect September 2018 regulation changes)

The California Bureau of Automotive Repair has retooled its regulations to emphasize that body shops shouldn’t be identifying parts with nebulous terms like “Opt-OE.” (leonello/iStock)

The California Bureau of Automotive Repair discussed the issue of unclear terms like Opt-OE during NACE 2016. (John Huetter/Repairer Driven News)