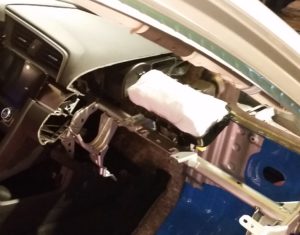 An Ohio collision repairer reports State Farm is refusing all operations related to the occupant detection system on a 2017 Honda Civic despite a position statement from the OEM requiring work on the safety system.

Repairer Three-C Body Shop sought to perform a passenger occupant detection system calibration because of the impact. That system checks the weight of the passenger in the front seat to ensure an airbag can be safely deployed — in some cases, such as a child in the seat, it might be more dangerous to fire the airbag than not to fire it.

Honda in a 2017 position statement wrote that an occupant detection system check “must be done after any collision, regardless of damage, even if no airbags deployed.” (Emphasis Honda’s.) Honda defines a “collision” as “damage that exceeds minor outer panel cosmetic distortion.”

“OCS sensors have been used on Honda and Acura vehicles since 2006,” Honda collision marketing national assistant manager Scott Kaboos wrote in an email Sept. 27. “I think the OCS check/initialization is probably one of the most often overlooked procedures in the collision industry.  In Service Express, using the keyword ‘Weight’ or ‘Weight Sensor’ will bring you to the procedures to check or initialize this system.

Three-C process manager David Rice confirmed to Spradlin that the damage to the Civic met Honda’s definition of a collision.

“If the damage was enough to cause damage to the inner ¼ panel in what we call the ‘dogleg’ area. I would say it is more than ‘minor’ cosmetic damage,” Rice wrote to Spradlin. “so yes it exceeds it in my opinion.”

Spradlin said he’d been “very methodical” and checked the damage severity repeatedly with Rice to see if it fit Honda’s definition.

“… Yes sir….the damage extended to the inner jamb of the ¼ panel.” Rice acknowledged that Honda’s position statement calls for a “check” under those conditions and the OEM requires a weight sensor recalibration when “front passenger seat components have been removed or replaced. Refer to the service information for procedures.”

However, given the critical safety role of the sensor, Three-C recalibrates it “just to make sure,” according to Rice.

“This is a safety feature,” he said.

Kaboos suggested repairers should think of the procedure as an “(I)nitialization” rather than a “calibration,” and Honda’s repair procedures describe it as such.

“Initialization is when a component has been replaced, like the SRS unit or other ECU,” Honda collision marketing national assistant manager Scott Kaboos wrote in an email. “The act of initializing is to have the ECU’s ‘learn’ and respond to their new environment.  Initialize is more of a software configuration and learning process.

“The act of calibration is more of an aiming procedure to make sure all the hardware is focused in the appropriate direction.  Calibration is usually applied to hardware: cameras, radars etc..”

Rice said no other insurer refuses to reimburse the calibration/initalization, nor do they refuse post-repair scans — as State Farm did in this case as well.

He said State Farm made no distinction between Honda’s “check” and initialization operations in its refusal.

“(T)hey are refusing to address the Recalibration of the Occupancy Sensor on any level at this point,” Rice wrote in an email. “It is still on a case by case basis, whatever that is supposed to mean. When presented to the local appraiser for SF. He stated he ‘called’ the dealer and they told him it is ‘not a standard’ procedure. That is laughable. There is very thorough position statement from Honda stating to the contrary. And just because we didn’t do it 30 years ago it doesn’t mean that it isn’t necessary on the Modern Vehicles we are repairing today with the Safety Features they do have. I would think it would be a concern of theirs (SF) to ensure the vehicle is 100% safe with all features working as designed by the manufacturer.”

From the point of view of an insurer or customer paying the bill, the question of a “check” or calibration/initialization might be immaterial. Honda repair procedures for a 2017 Civic sedan suggest that while both operations do have their own unique steps, they seem to impose similar workloads under normal circumstances (i.e., none of the additional troubleshooting steps described in the manual are required). The labor hours — and therefore the cost — might not be very different.

Honda’s repair procedures for the “check” demonstrate this and illustrate that the operation is more involved than just eyeballing the seat. The procedures warn that before a shop performs the check:

• Before doing this procedure, clear the DTCs.

• Before doing this procedure, make sure the 12 volt battery is fully charged.

• Make sure the front passenger’s seat and all components of the seat are correctly installed.

• Make sure nothing is on the front passenger’s seat, including aftermarket seat covers or mats.

• Make sure there is nothing in the front passenger’s seat-back pocket.

• Make sure the vehicle is on level ground.

• When the vehicle is exposed to intense cold or intense heat, move the vehicle inside, open the windows and moonroof (if equipped) and perform this procedure after one hour or more.

• Do not expose the front passenger’s seat to sudden temperature changes.

• Do not touch the front passenger’s seat and keep the vehicle stationary during this procedure.

• Do not attach the seat belt tongue into the buckle.

• If possible, do all of the above procedures inside. (Minor formatting edits.)

The repairer must get the seat in the correct position and ensure with a scan tool the weight for the empty seat is within 4.6 pounds (2.1 kilograms). If the latter didn’t happen, the shop will have perform some additional work and switch to the initialization operation.

The repairer performing the check must then place a uniformly shaped and sized weight of between 22 and 44 pounds (which must be confirmed with an scale accurate within 2 pounds) “precisely on the center line of the seat.”

If readings from the weighted seat, empty seat, and external scale yield a variance of within 4.9 pounds (2.2 kg) when fed into a Honda equation (it’s grade-school division and subtraction, so don’t be intimidated), you turn the vehicle to the “OFF (LOCK) mode” and call it a day. The car passed the “check.”

If either of the readouts involving the physical seat were out of tolerance, you’ve got to perform some more work and switch to the initialization procedure.

As always, we’re providing this abbreviated summary for context. Refer to the actual Honda repair procedures online and follow those on an actual repair.

Rice said Three-C has experienced several issues with State Farm, “on Hondas especially.” He noted that the carrier had approved pre- and post-repair scans on a 2018 Ford produced by an OEM with no position statement, but refused on Honda, which had a “strong” statement.

State Farm was “absolutely” refusing to pay for scans on other customers, and “they’re still denying it” even when open codes are found in a mid-process scan, according to Rice.

He said a refusal to post-scan and calibrate ODS sensors has been an ongoing issue with State Farm for “well over a year,” ever since Three-C became a ProFirst-certified shop.

After other State Farm refusals, Three-C has billed the State Farm claimant out-of-pocket, Rice said. Most claimants will pay, “which I think is ridiculous” that State Farm pushed them to this, Rice said. Some customers refuse and are asked to sign a hold-harmless, he said.

Three-C must be able to look at a customer and say, “‘Your vehicle is right,'” Rice said.

In a 2016 CollisionWeek video of a NACE 2016 panel featuring multiple OEMs — including Honda — and State Farm claim consultant Chris Evans, Evans mentions the insurer’s recognition of scanning and position statements.

“State Farm has nothing to share with Repairer Driven News,” State Farm public affairs specialist Anna Bryant wrote in an email when contacted for comment about this issue.

A passenger-side airbag on a 2016 Honda Civic body-in-white is shown. The car is part of the same design generation as the 2017 Civic. (John Huetter/Repairer Driven News)

Damage to Gerald “Frankie” Spradlin’s 2017 Honda Civic met Honda’s threshold to count as a “collision,” according to Three-C Body Shop. The car was backed into by a State Farm policyholder. (Provided by Spradlin)