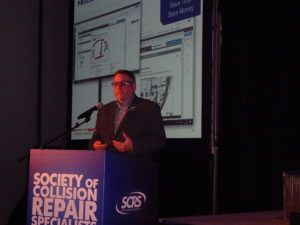 General Motors will require its certified collision repair facilities to use program administrator Mitchell for estimating, a mandate the OEM says will allow it to track shop performance and give repairers an easy way to look up up-to-date repair procedures.

Part of General Motors’ ongoing shop audits will involve looking at the content of individual estimates, according to GM customer care and aftersales collision manager John Eck. For example, if a part must be replaced per OEM repair instructions and the estimate lists it as reinstalled, GM knows the shop performed an incorrect repair.

Such visibility is one of the reasons for the requirement, according to Eck.

However, this will require shops who prefer a different estimating system to purchase and use Mitchell, and that population could be sizeable.

The April Collision Advice/CRASH Network “Who Pays for What?” survey found 82.9 percent out of the 756 shops responding had CCC installed. About 28.3 percent used Audatex, and 22.2 percent had Mitchell. (Some shops have multiple estimating services, which is why the percentages add up to more than 100 percent.)

The 2018 survey had a margin of error of 3.5 percentage points on questions with 750 participants, and so the year-over-year changes aren’t technically significant.

CCC was the only system in 2018 that saw more shops listing quality over any other reason for using the software. About 37.6 percent of an unspecified population of shops ranked quality No. 1, beating out the 30.5 percent of shops that said they bought it because an insurer made them.

By contrast, just 12.8 percent of users said they bought Mitchell and 12.7 percent of shops said they purchased Audatex primarily because of its quality. Insurance requirements were overwhelmingly the No. 1 reason why shops bought those systems.

“It appears that CCC continues to see an increase in users while AudaExplore and Mitchell, though down from 2016, are virtually unchanged from last year,” Collision Advice CEO Mike Anderson wrote in discussing the results. “Over the past few years, there has been a not-insignificant drop in the percentage of shops having multiple estimating systems. I think both these trends are based on more insurance companies switching to CCC, with shops following and having less of a need to have multiple estimating systems for the different insurers. It’s also noteworthy that … more than one-third of CCC users cite the quality of the product as their primary reason for using that system – more than twice the percentage that cited that reason for Mitchell or AudaExplore.”

Subscribing to Mitchell Cloud Estimating costs about $340 a month, according to a representative at SEMA. However, Mitchell has announced plans for an a la carte, pay-by-the-estimate option; the rep said pricing hadn’t yet been announced.

“They can do a la carte” or pursue a full subscription, Eck said. He said Mitchell was trying to accommodate the market, and the a la carte option might be appropriate for a shop which doesn’t have many GM vehicles in their area.

Eck argued that just because a large part of the market has CCC doesn’t mean that the market doesn’t have Mitchell. That company still had “10,000 deployments-plus,” he said.

He pointed out that insurers also ask for estimates from a particular information provider, his dealerships are forced to use multiple parts procurement platforms, and at least one other OEM required certified shops to use a particular IP.

“Tesla did it,” Eck said. The company in 2015 demanded shops use Audatex, though Database Enhancement Gateway tips suggest it now appears to allow CCC and Mitchell.

At this point, “Mitchell’s the only one that can meet our criteria” of measuring a correct repair and placing it in an environment that “meets our standards,” Eck said.

He told the OEM Summit that GM had to pick a partner and it had to make a business decision, just as a collision repairer would. If it tried to be one-size-fits-all, “we would never have a program,” he said. Eck also noted that GM had to make a decision relevant to both the U.S. and Canadian market.

New and existing Mitchell customers might view the system more favorably in future studies, however.

In contrast to other third-party aggregators (including Mitchell prior to earlier this year), Mitchell Cloud Estimating will make GM repair procedures available at the time of the estimate — with barely any lag between the moment GM posts them and they appear in Mitchell, according to Eck. 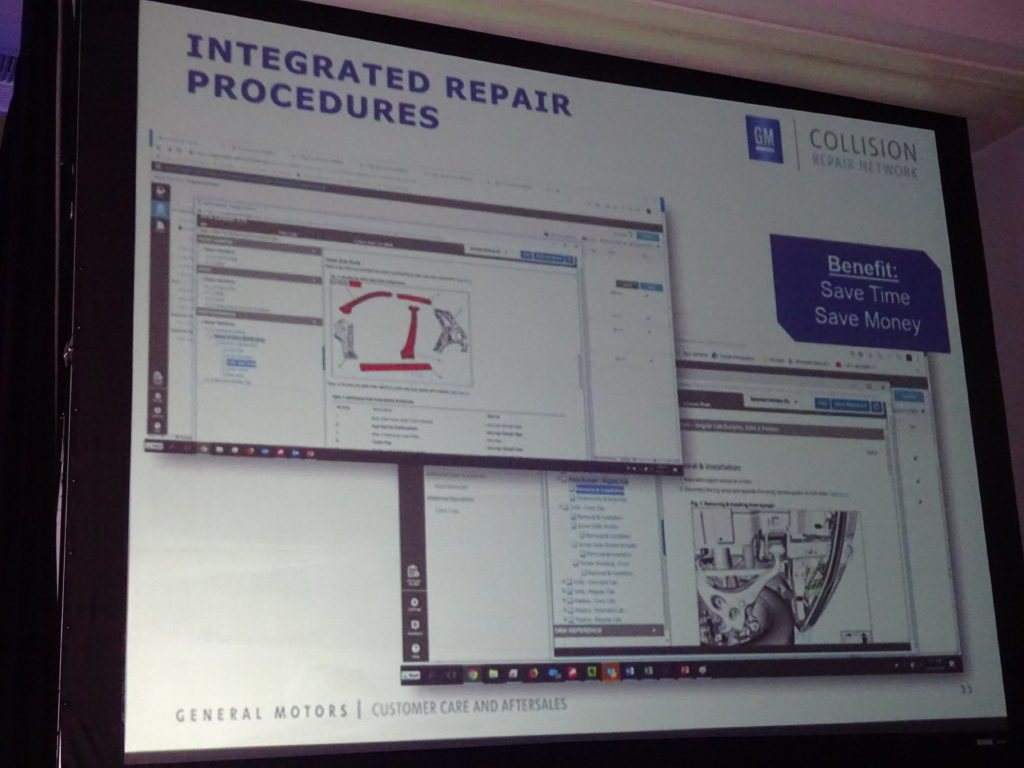 Eck mentioned this capability — which is available to all Mitchell users, not just the GM-certified shops — during the Society of Collision Repair Specialists OEM Collision Repair Technology Summit on Thursday. He asked if the ability to pull GM repair procedures immediately at the time of the estimate would make collision repair lives easier, and the audience applauded.

OEMs and other collision experts have warned shops to always look up repair procedures online on each vehicle, even if it’s a car the repairers have fixed hundreds of times. OEMs can and do frequently change procedures, and the way you fixed a car last week might be obsolete. The new repair procedures might be more convenient — or the car itself might have changed during the production run and demand new instructions.

This has led to a concern that repair procedures on third-party aggregators — which license OEM repair procedures from the automakers but are limited to periodic, not real-time updates — have too much of a lag to be relied upon.

“How many months does that take?” Eck said.

However, Mitchell’s partnership with GM allows it to get an updated GM repair procedure up on Mitchell Cloud Estimating in mere days, according to Eck.

“One week or less,” Eck said, and he said they’re working to shorten that time.

Technically, this is still a lag. But Eck seemed confident that the gap had been shortened to the point that using the procedures on Mitchell would be acceptable.

“We’re talking within a week,” he said.

Eck said GM had worked out a similar arrangement with Mitchell on the company’s third-party scan tools. 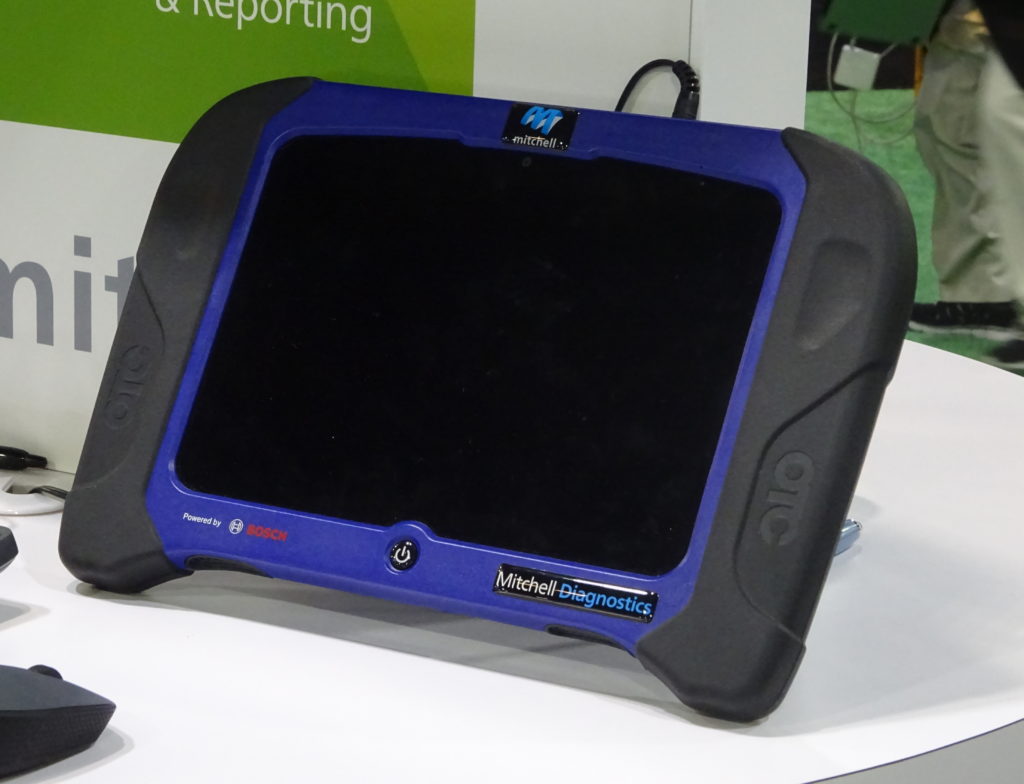 The equipment list for certified shops lists Mitchell’s MD-200 and MD-300 as alternatives to owning GM’s own GDS 2 tool if the shop has a “current license/subscription.” The document still warns, “Use of any other tool other than the GM MDI-2 tool may not produce an accurate report.”

Eck said GM can only vouch for its own tool, but the Mitchell one at least uses GM’s software onsite — “not remotely” — and are updated at “acceptable levels.”

Collision Advice/CRASH Network “Who Pays for What?” 2018 body survey

The April Collision Advice/CRASH Network “Who Pays for What?” survey found 82.9 percent out of the 756 shops responding had CCC installed. About 28.3 percent used Audatex, and 22.2 percent had Mitchell. (Some shops have multiple estimating services, which is why the percentages add up to more than 100 percent.) (Provided by Collision Advice and CRASH Network)

In contrast to shop answers about CCC, just 12.8 percent of users surveyed in the April “Who Pays for What?” study said they bought Mitchell and 12.7 percent of shops said they purchased Audatex primarily because of its quality. Insurance requirements were overwhelmingly the No. 1 reason why shops bought those systems. (Provided by Collision Advice and CRASH Network)

General Motors and Mitchell have worked out an arrangement to make GM repair procedures available at the time an estimate is being written, with barely any lag. (General Motors slide; photo by John Huetter/Repairer Driven News)