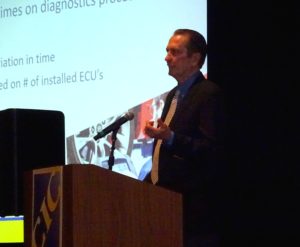 Rozint said five different ways exist to scan a vehicle — something his CIC committee has highlighted in its extensive work summarizing such issues. They include running the diagnostic check in-house with an OEM scan tool or an aftermarket scan tool; connecting remotely to a scan provider (e.g. AirPro or asTech); subletting to a mobile technician; and subletting to a dealership, he said.

All five have different labor times and couldn’t be normalized, Rozint said. 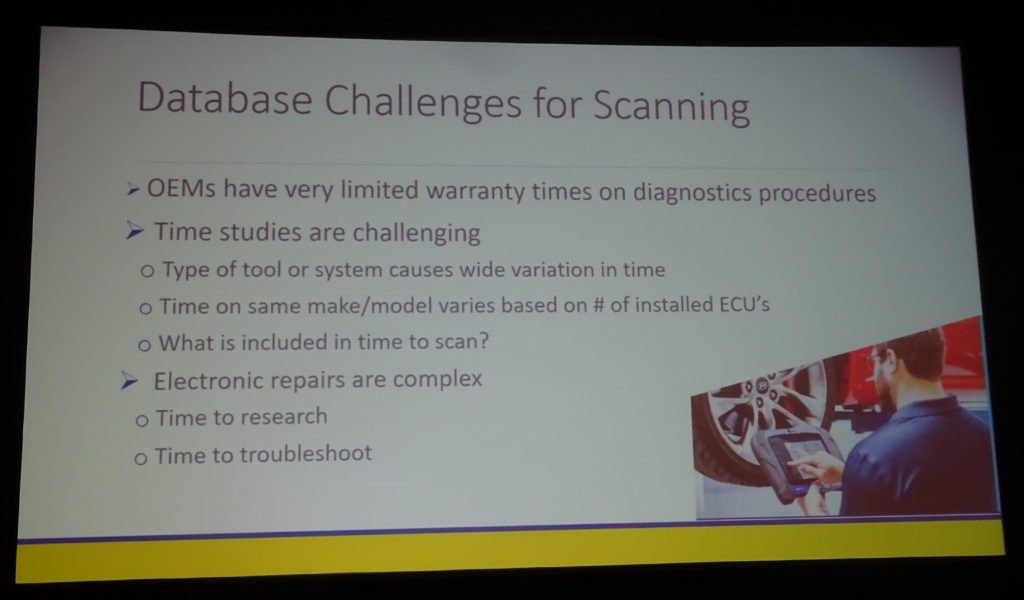 Due to the wide range of collision damage and vehicle conditions, labor times for the following operations are not included in the Guide …

OEM recommendations may include pre/post-repair scan(s) on vehicles involved in a collision to assist in discovery of any specific Diagnostic Trouble Codes (DTC’s). Refer to OEM specific position statement(s) and/or repair procedures for additional information.

CCC in October 2018 updated its P-pages to make a similar point as Rozint:

Database Enhancement Gateway Administrator Danny Gredinberg said last fall he had discussed the issue with CCC. He said he felt it was better to leave this value open, for there are “too many scenarios involved,” he said.

The scan tool might not even communicate with the vehicle when attached due to the nature of the damage, or wires might be damaged by the collision, he said. Conversely, a  lighter hit might not require as much scanning time. Different scan tools might behave differently as well, according to Gredinberg, giving the example of an OEM tool which have prerequisites before accessing a module, while an aftermarket tool might jump right to it.

He contrasted this with a wheel alignment, which he said had similar procedures regardless of alignment machine manufacturer. “There’s only one way” to do it, he said, and “they’re all performing the same measurement.”

Audatex also lists pre- and post-repair scanning among its “Labor Exclusions” (except on Teslas through November 2017), prefacing the list by writing, “Because each vehicle’s collision damage is unique, labor to perform some of the following operations may vary.”

The Society of Collision Repair Specialists on Monday posted a video demonstrating some of the steps which a remote scan could entail.

SCRS Executive Director Aaron Schulenburg told the CIC, which received a special screening of the film, that members had told the organization they were having issues explaining scanning, particularly in-house work.

“There’s a perception that maybe all it is is plugging something in, magic happens and it gets unplugged … that’s not quite the case,” Schulenburg told the CIC.

Even using the same scan tool might produce different labor times for two vehicles of the same year, make and model if the build data varies, according to Rozint. Scanning a base model might only mean the software checking 20 controllers, but a fully loaded variant of the vehicle might have 45-50 controllers to scan, which takes longer, he said.

Rozint said what is considered part of the scanning operation is a source of debate. He gave the example of whether time to research diagnostic trouble codes would be included. (Something that would be more involved than just plugging a tool in and receiving its results.)

“All that’s being worked on,” including by Mitchell, Rozint said.

But you couldn’t put a book time on research and troubleshooting, he said.

“It’s all over the map,” he described the results presented to CIC.

Some repairers billed for scanning with a flat-rate charge (seen below in blue), while others tied the amount to labor hours (seen below in orange). Some bills exceeded $1,000 in instances where the vehicle had to be sent to a dealer for “scanning and recalibration,” Rozint said. (Which sounds like technically two sublet operations, which might explain the price.) 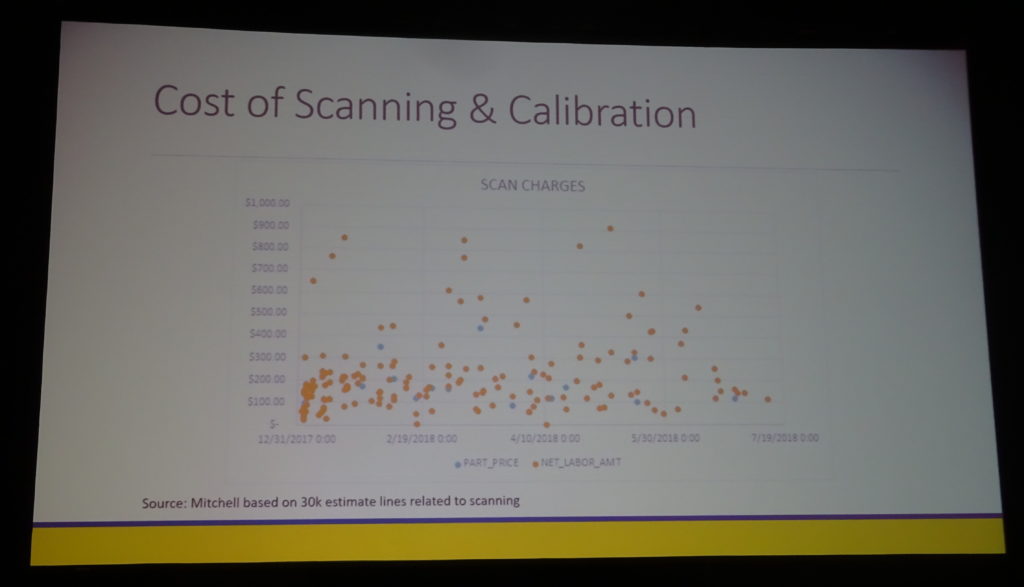 The Database Enhancement Gateway in October 2018 posted this cheat sheet dictating what is and isn’t included on operations related to scanning and calibration. (Provided by the DEG)