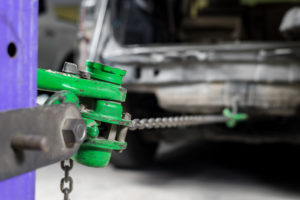 Despite collision repairers supporting the bill, representatives of two insurers and and a retail trade group argued that Montana legislation demanding OEM procedure compliance could harm shops without the capability to keep up with the requirements.

Senate Bill 251, which has been tabled and is effectively dead, would have added the repair procedure requirement to existing law demanding insurers follow “a repair operation or cost identified by an estimating system” agreed upon by the insurer and body shop.

(5) the use of parts, paint, and materials. (Minor formatting edits.)

Sponsor Gordon Vance, R-Bozeman, said he was willing to cut Part 5, which was potentially the most controversial element.

Capital Collision Center owner Bruce Halcro told the state Senate Highways and Transportation Committee Feb. 14 he is often told by insurers that they use industry standard rather than manufacturer standard. However, the idea of industry standard comes from the building trade, which also has extensive oversight in the form of inspections throughout the process, he said.

“There’s really no oversight in the auto industry,” said Halcro, who supported the bill. The only guide is the OEM repair procedures, he said.

All three national collision trade groups and the national insurer and repair training organization I-CAR have also said for years OEM repair procedures are the standard of care, as have the courts.

“The bottom line is: Cars have to be fixed a certain way,” Montana Collision Repair Association President Paul Flores (Rick’s Auto Body) told the committee. “… For consumer safety, to level the playing field, we need to start with OEM repair procedures.”

But others at the hearing resisted the idea and the bill’s language.

“One of the things that I think about … was: ‘Can every shop in Montana, who works for an insurance company or not … will they be able to meet the requirements, the repair procedure requirements that come from the OEM folks?'” Sate Farm lobbyist Greg Van Horssen said regarding Senate Bill 251’s repair procedure mandate for shops. “We don’t even know what that is gonna look like.”

Allstate lobbyist Bruce Spencer stated that he didn’t know if the collision repairers testifying in the support had thought through the bill.

Dealerships are required to buy specialty parts and equipment, which are “not inexpensive,” and the same could apply to repair shops, Spencer said. If the OEM instructions required a certain tool to install a part, the shop would have to have it, for there’s “no exemption” in the bill. He said this could be an “unintended consequence.”

“I’ll be honest,” Spencer said. “I have not read those specs that come from the manufacturer. I don’t have access to them. I don’t know if they say that or not.”

Montana Retail Association Chairwoman Sarah Swanson urged the committee not just to think of the underequipped shops, but also the “preservation of our rural communities.”

She said the hearing included some “really great” body shops, but “did you hear from anyone in a rural community or a small business owner that doesn’t have the resources to invest, up front, in these special tools, service bulletins and OEM guidelines?”

She called it “underhanded” that customer’s right to pick their repair shop would be limited to the shops which “made those investments” and could afford the tools, literature and technology.

If a shop couldn’t, “they’re no longer in business,” she said. Repair business mostly only came in after crashes, “so if we tell them, ‘Unless you invest on the front end, you can’t be in business.’ That’s a pretty dangerous statement to make.”

Swanson, who said she has experience as a Ford franchise and John Deere dealership, said OEMs often consider specifications, service bulletins and special tools “proprietary,” which meant they were only available to dealers or to repairers “with the resources and financial capital where they can purchase those tools and materials too.”

“So with this bill, we’re mandating that any body shop that completes any repairs on our vehicles in Montana has to invest at that level,” she continued. “They have to buy the rights to the repair manuals and the service bulletins, they have to buy the special tools, and we’re pricing out of the market the small competitors.”

Before mandating adherence to repair procedures, Montana needed to talk about who had access to such items, she said, wondering if this was another revenue stream for the manufacturer. (Though this undercuts her argument slightly — if shops can’t afford them, there’s no revenue.)

Halcro said OEM repair procedures have been around for a while, and the fact that shops had to purchase them from some OEMs wasn’t different than the requirements for a mechanical shop.

“They are available,” he said.

If someone in the industry didn’t know where to get them or hadn’t seen them, “that really is the problem.”

OEM procedures and equipment are available to everyone, even laymen, under the 2014 right to repair memorandum of understanding between the Auto Alliance and Global Automakers and the automotive aftermarket. (Granted, OEMs who aren’t a member of either trade group aren’t bound by it — Tesla a notable example — and Hyundai has yet to release U.S. procedures but says it’s working on it. But basically everyone else is on board.)

Swanson said she was a Glasgow, Mont., resident, and the 3,000-person town had two independent repair facilities and two dealerships. She doubted they could invest in the necessary items, and her county would have to take their vehicles more than 100 miles away. The bill imposed “onerous regulations” and would drive rural proprietors out of business, she said.

However, the complexity of vehicles might make this unavoidable. After all, it’s not like a rural doctor who can’t afford to upgrade to the state-required level would be designated a trauma center because they really want that business. Or, for that matter, a rural doctor who falls on hard times and can’t afford all of those expensive syringes and X-rays and things anymore can’t really keep practicing just because it’d be nice to have a doctor in town.

Sponsor Gordon Vance, R-Bozeman, said it would concern him if someone said they didn’t want to follow OEM repair procedures.

“That concerns me,” Vance said. He said he wanted those procedures followed by someone trying to put his car back together.

This is likely not how any U.S. OEM wants you to repair their vehicle bodies. (Bhakpong/iStock)

This guy very likely is not using an OEM-approved scan tool. (IndyEdge/iStock)

Nobody really seems to be lamenting for doctors who didn’t upgrade to new techniques and tools. (matthewzinder/iStock)