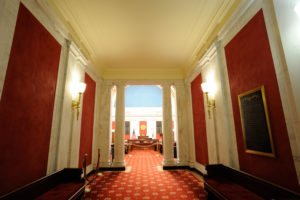 The West Virginia regular legislative session has ended without action on two bills relevant to the collision repair industry.

A special session has begun, but its scope is limited to education.

Neither Senate Bill 49, which mandated insurers to effectively only call for new OEM parts on late-model vehicles, nor House Bill 2115, which would have brought Massachusetts’ automotive “Right to Repair” law to the Mountain State, had made it out of their initial committee as of the adjournment of the regular session Friday.

However, West Virginia Code as worded today still allowed the use of recycled parts, as the West Virginia Supreme Court of Appeals famously held in 2014. The courts declared that if the Legislature desired to exclude salvage parts, it would have said so in the law.

Under the new Senate Bill 49, insurers still could demand recycled parts but no aftermarket components for the “current model year plus two years” — even if the customer were to consent in writing.

But repairers doing insurer-pay work “must use genuine new original equipment parts sufficient to maintain the manufacturer’s new vehicle warranty for fit, finish, structural integrity, corrosion resistance, dent resistance, and crash performance.” The notion of installing something else with customer written consent had been excised.

The bill was filed Jan. 9 by Sen. Randy Smith, R-Terra Alta. It went to the Senate Judiciary Committee but failed to command any action since.

West Virginia House Bill 2115 was basically a copy of Massachusetts’ House Bill 4362, which was signed into law in 2012. (In fact, it still would have provided the aftermarket repairer the option to “file a complaint in the superior court, or if applicable in the federal district court for the district of Massachusetts.”)

The Massachusetts bill required automakers to sell the aftermarket the same repair procedures and equipment they make available to dealerships to fix vehicles all vehicles dating back to the 2002 model year. (If you’re wondering about Hyundai, who doesn’t make collision repair procedures available in the U.S., know that its dealers with body shops can’t get them either to our knowledge. So Hyundai is compliant.)

OEMs also were required to license diagnostic software to scan tool companies, and by the 2018 model year, make a way for the aftermarket to scan the vehicle with an off-the shelf computer. (If you have a laptop and an interface meeting the SAE J-2534 standard, you can download the OEM’s operating system and run the laptop like a scan tool. Some scan tools are “J-Boxes” as well; for example, AirPro can download the OEM operating system to scan cars if it deems its on-board aftermarket software insufficient.)

Oddly, the West Virginia bill wouldn’t have imposed the 2018 scan tool requirement until the 2020 model year.

Rather than deal with 50 states passing different versions of the law, most automakers and major aftermarket repair organizations in 2014 worked out a Memorandum of Understanding holding OEMs to largely the same terms as the Massachusetts law.

West Virginia Delegate Gary Howell, R-Keyser, did not reply to an email inquiry last month as to why he felt the bill was necessary given the memorandum.

However, automakers not affiliated with the Alliance of Automobile Manufacturers and Association of Global Automakers aren’t technically bound by the MOU.

Tesla had been a notable exception and for a while only made repair procedures available in Massachusetts (unless you were a certified shop), but it appears as of Friday to have since opened up its service website to everyone.

Except in the instance of a dispute arising between a franchisor manufacturer and its franchisee dealer related to either party’s compliance with an existing franchise agreement a dealer has all the rights and remedies provided in this chapter, including, but not limited to, in the instance when exercising rights and remedies as allowed as an independent repair facility. (Minor formatting edits.)

Both the West Virginia bill and Massachusetts law also delineated a different path and penalty regarding enforcement than the memorandum compels.

The memorandum relies on a “Dispute Resolution Panel” (ironically for the collision aftermarket, it’s abbreviated “DRP”) to enforce its provisions. The Auto Alliance and Global Automakers trade groups will each get one representative, and the Coalition for Auto Repair Equality and Automotive Aftermarket Industry Association will jointly pick two other panelists to represent independent repairers. Those four organizations will unanimously pick and pay for a single independent professional mediator to chair the panel.

If the repairer and automaker still can’t work it out, the repairer “may take whatever legal measures are available to it,” according to the memorandum.

As alluded to above, the West Virginia bill echoed the Massachusetts law and relied upon the National Automotive Service Task Force and ultimately the courts to handle disputes.

(b) An independent repair facility or owner who believes that a manufacturer has failed to provide information or a tool required by this article must notify the manufacturer in writing through the National Automotive Service Task Force (NASTF) Service Information Request process or its successor organization or process, and give the manufacturer 30 days from the time the manufacturer receives the complaint to cure the failure. If the manufacturer cures said complaint within the cure period, damages are limited to actual damages in any subsequent unfair method of competition and an unfair or deceptive act or practice in the conduct of trade or commerce litigation.

(c) If the manufacturer fails to respond to the notice provided pursuant to §17A-16F-6(b) of this code, or if an independent repair facility or owner is not satisfied with the manufacturer’s cure, the independent repair facility or owner may file a complaint in the superior court, or if applicable in the federal district court for the district of Massachusetts (sic; they probably mean one or both of the West Virginia District Court). The complaint must include, but not be limited to, the following: (1) Written information confirming that the complainant has visited the relevant manufacturer website and attempted to effect a proper repair utilizing information provided on the website, including communication with customer assistance via the manufacturer’s toll-free call-in assistance, if made available by the manufacturer; (2) written information confirming that the complainant has obtained and utilized the relevant manufacturer’s scan or diagnostic tool necessary for the repair; and (3) evidence of manufacturer notification as set out in §17A-16F-6(b) of this code.

The Massachusetts law and West Virginia bill added more consequences for an OEM failing to meet these conditions.

“In addition to any other remedies that may be available under law, a violation of this article is an unfair method of competition and an unfair or deceptive act or practice in the conduct of trade or commerce in violation of this code,” HB 2115 states, similar to the language in the Massachusetts law.

The bill was filed Jan. 9 and sent to the West Virginia House Technology and Infrastructure Committee, but no action was taken since.

The West Virginia Senate Chamber is shown in 2012. (aimintang/iStock)