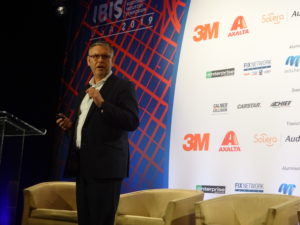 His message to the International Bodyshop Industry Symposium on Feb. 14 might present a better way for U.S. carriers to interact with collision repairers.

Thompson said he grows “very frustrated” by the constant use of the term “vendor management” at Zurich, calling it just hitting someone over the head with a contract. He said he’s trying to drive an ethos at Zurich of leveraging the relationship with suppliers rather than looking at it as adversarial or high-friction.

The company couldn’t look at the way it operated for the past 160 years and say, “‘It’s all about vendor management,'” Thompson said. “It’s not. It’s all about partnerships.'”

He called this ethos “so critical” to the new service ecosystem he described at the conference that Zurich would spend “a lot of energy” on it.

Thompson described his principles. In the “bad world,” as an insurer, they would focus solely on cost. “We hammer people down on the cost,” he said.

But he recounted how Michael Wilmshurst, a friend and the CEO of No. 1 U.K. MSO National Accident Repair Services, constantly points out that shops make “really low margins,” and hammering on cost would mean “it’s gonna pop up somewhere else.”

Thompson said the best negotiations he has with Wilmhurst are what he called the “cards on the table piece” where the question is how can they both come out ahead. It means being more “trustful” and looking at combined success, he said.

Asked about the evolution from a master-servant relationship to a partnership, Thompson said it came back to the quote attributed to Peter Drucker: “Culture eats strategy for breakfast.”

Referencing a decision to partner with Snapsheet, Thompson said the two companies tried to work out if they had a culture and approach that would allow the partnership to work.

Something is “really, really wrong” with the relationship if contracts need to be wielded, according to Thompson

Asked how to ensure his C-level notion of partnership actually reached the appraiser-shop level, Thompson said, “It’s a fundamental question.”

Thompson said he could push the ethos to staff and promote examples of what was good.

He said the idea of striving for a “shared outcome” had worked for him in the past. Rather than hit someone with the contract, interact frequently, discuss the range of shared outcomes desired and work together on it, he said. He allowed that this was “quite difficult,” because the body shop manager (this appeared to be a reference to the DRP manager at the carrier) would be pushed about the P&L.

A “simple win” for an insurer might be “how bloody quickly” it paid shops, according to Thompson. Cutting reimbursement time down to 24-48 hours could help a body shop manager in terms of cash flow and create a more positive feeling, he said.

But the other trick would be getting staffers interacting and talking about a shared purpose, Thompson said.

He said he wanted to have a supply partner conference this year, which he said might be a first for Zurich. Participants would talk about how to make the desired outcome happen.