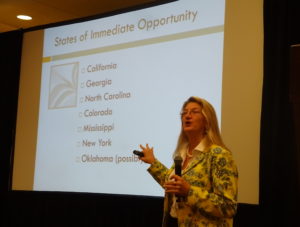 A slide from the presentation by the collision industry attorney and Automotive Education & Policy Institute founder said Colorado, California, Georgia, North Carolina, Mississippi and New York were “States of Immediate Opportunity” based upon her conversations with their insurance commissioners at a recent NAIC meeting.

She also counted Oklahoma as a possibility, though not as definitively as the others. She called Republican Commissioner Glen Mulready “very interesting” and noted his campaign was based upon the idea of health care choice. However, she said they had a “great conversation,” and the Property and Casualty liaisons were able to have him to themselves for an hour to discuss their issues.

The list drew applause from the audience at the April 17 Society of Collision Repair Specialists Repairer Roundtable.

“These states were very receptive,” she said.

Just because your insurance regulator isn’t on the list doesn’t mean they’re not receptive to the industry.

Janet Chaney of the Iowa Collision Repair Association said her group had had worked closely with Commissioner Doug Ommen, and “my heart broke” at his absence from the list. However, Eversman explained that she only included commissioners with which she’d been able to speak specifically about the industry. She’d only had an opportunity to talk to Ommen socially during the conference.

Eversman said her perspective was that insurance commissioners fall into three categories.

Some seek to protect insurers. Others come at their regulatory role with a focus on laws and regulation and act narrowly within those parameters — which is where Eversman at this point classified Ommen. The third type is very consumer-friendly, and she said she was “taken aback” by their numbers, expecting to encounter more of the “‘insurers are perfect'” type of commissioners than she did.

She and the other property and casualty liaisons had private meetings with Pennsylvania, New York, Colorado, and Georgia regulators in addition to Oklahoma’s. Ohio and North Carolina sessions are definitely on tap at the next meeting.

She shared anecdotes from her conversations with some the “States of Immediate Opportunity” leaders. California Insurance Commissioner Richard Lara after a presentation on insurers refusing to pay for OEM repair procedures said he wanted to work with her. “‘I will be in touch with you,'” he said, according to Eversman.

She called Lara, a Democrat, “very, very focused” on protecting consumers, but he also was sympathetic to underpaid small businesses.

Lara mentioned to her that Los Angeles County has some of the highest insurance rates in the country, and she noted it had some of the lowest body labor rates nationally, she said. “‘How do you mix those two?'” she described her argument.

Georgia Commissioner Jim Beck, a Republican, called her the day before the SCRS talk and said, “‘We need to do something about this.'” He said he couldn’t change policy language — it was already approved — but were there ways that it could be interpreted more beneficially for consumers, he wondered.

She said it was a “great conversation” and they had plans to speak today.

Eversman and other the property and casualty liaisons met with regulators during what she described as an information-packed conference spanning five very long days. The insurance commissioners hold three of these NAIC events annually, though the commissioners themselves aren’t required to be at all five of the days, Eversman said.

Besides the 50+ American insurance commissions (areas like Guam and Washington, D.C., have commissioners too), Eversman estimated the conferences draw about 1,000 regulatory staffers, the 30 consumer liaisons, and about 1,000 employees, lobbyists and attorneys from the insurance industry.

“The place is just filled with the insurance industry,” she said.

File a complaint in your state