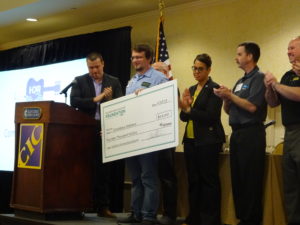 The March Taylor Memorial Fund and Nashville I-CAR aided the supply side by awarding tools and a scholarship, respectively, to automotive repair students. The Collision Repair Education Foundation addressed technician retention and development by launching a mentor-mentee competition for the industry.

Both fronts can play a role in getting the industry the talent it needs, based on statistics presented during the auto body repair summit.

The collision repair industry potentially could steal graduates from the auto repair and diesel industries, but competition could be fierce. TechForce reported 56,596 “automotive,” diesel and collision students combined graduated in 2016 — satisfying less than half the 121,400 combined positions needed based upon BLS data.

The March Taylor Memorial Fund and I-CAR Nashville might have made the prospect of entering such a program or deciding to pursue a job in collision more attractive with their work April 18.

During a special presentation during Day 2 of the CIC summit, emcee Jeff Hendler (JD Hendler/Associates) announced six students would receive a tool box and tools with a retail value of about $1,000.

“I know you’ve worked hard to earn them,” Hendler said.

The winners were all attendees of either the Shelbyville or Livingston campuses of the Tennessee College of Applied Technology: Heath Jefferies, Andres Jaimes, Frederick Copeland, Jacob Holdren, Sarah Caum and Ethan Thomason.

Hendler told the students that Taylor was “one of you.”

“He believed in the people that worked in the shop,” Hendler said.

Nashville I-CAR followed with a presentation of a $14,000 check covering “every dollar of your student loans” to Zaccheus Stephens of Lincoln Tech, according to Chairman Kyle Medeiros.

Medeiros said Stephens will upon graduating work at CarMax Rivergate but dreams of opening his own body shop focusing on on “quality of the product” and “honesty given to the customer.”

“‘When I become the most trusted in the business, you will be content in knowing that you helped me get there,” Stephens wrote in his essay, according to Medeiros.

Stephens thanked his classmates for their support — “I’m not a genius at all” — his family, and God.

The generosity shown last week should be a lesson to parents and youth everywhere — this industry could be an affordable one to enter. Peevy told students that when an opportunity existed to fill out a scholarship, “do it.” The industry had many resources to offer, and he hoped the students got the idea “we want to help you.”

Even if the industry encourages more kids to attend a collision program, graduate and start work at a shop, it’s nearly even money the sector won’t be able to keep them, according to Holt.

He said 42 percent of students across all three transportation trades (automotive, collision and diesel) leave their industry within the first two years.

“That is not sustainable,” Holt said.

However, mentoring increases retention a whopping 77 percent, according to Holt.

Kevin Creegan (Saint-Gobain) and CREF director of strategic partnerships Christen Battaglia cooked up the idea of a mentoring competition, Holt said. (The inspiration occurred during SCRS’ annual SEMA Week blowout — yet another reason to sign up for the 2019 RDE series.)

CREF seeks 12-15 mentor-mentee teams from chains or shops with mentoring programs to compete in the one-day event, Holt said. The event will test the teams on necessary skills for entry-level collision technicians. (Holt indicated refinishing might be added in a future event.)

“We want you to enter your team,” he said. “… We want to promote mentoring.”

Anyone interested in competing, sponsoring or donating equipment, parts or supplies should contact Battaglia at 302-377-5202 or Christen.Battaglia@ed-foundation.org.

“Each year, the collision industry faces a critical shortage in the number of new technicians entering the industry. Worse, many repair facilities have been challenged delivering effective mentoring programs for these new technicians to grow their abilities and prosper in the industry. As a result, too many new technicians leave the industry after just a few years, exacerbating the shortage,” Battaglia said in a statement Wednesday. “This new competition is designed to recognize the accomplishments of successful mentors and technicians, highlighting the successes that can be achieved.”

An informal audience poll found 30 percent reporting no mentoring had occurred in their shop/company over the past two years. Another 44 percent said they’d mentored between 1-10 employees, while 22 percent had mentored more than 20 during that time.

Nashville I-CAR on April 18 announced a $14,000 check covering “every dollar of your student loans” for Zaccheus Stephens of Lincoln Tech, according to Chairman Kyle Medeiros, left. (John Huetter/Repairer Driven News)

March Taylor Memorial Fund board member Toby Chess, left, speaks during an April 18, 2019, presentation of an estimated $1,000 worth of tools and a toolbox to six Tennessee College of Applied Technology students. (John Huetter/Repairer Driven News)