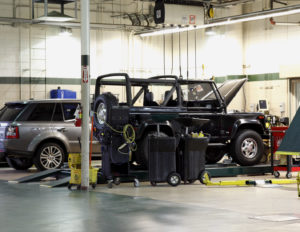 A California law enacting limitations on the time an automotive repairer can charge a “legal owner” storage without notification doesn’t apply to totaled cars purchased by an insurer, a BAR regulator said Wednesday.

“(a) Whenever the name and address of the legal owner of a motor vehicle is known, or may be ascertained from the registration records in the vehicle or from the records of the Department of Motor Vehicles, no fee or service charge may be imposed upon the legal owner for the parking and storage of the motor vehicle except as follows: (1) The first 15 days of possession and (2) following that 15-day period, the period commencing three days after written notice is sent by the person in possession to the legal owner by certified mail, return receipt requested, and continuing for a period not to exceed any applicable time limit set forth in Section 3068 or 3068.1 of the Civil Code,” California Vehicle Code 10652.5 states.

The law could “absolutely impact your business,” California Bureau of Automotive Repair operations branch program manager Matthew Gibson told the Glendale/Foothill chapter of the California Autobody Association on Wednesday. If a legal owner wasn’t notified after three days, storage is capped at 15 days.

However, “this would never apply to an insurance company,” Gibson said.

Gibson said he had a few calls in which body shops were told they could only charge 15 days of storage in what appeared to be an insurer’s interpretation of 10652.5. The insurer thought they were the legal owner, but “in reality,” they weren’t, he said.

An insurer can’t be a legal owner based on the definition of the term in California Vehicle Code 370, Gibson said. In fact, Gibson said he wouldn’t even be considered the legal owner of his own vehicle.

“A ‘legal owner’ is a person holding a security interest in a vehicle which is subject to the provisions of the Uniform Commercial Code, or the lessor of a vehicle to the State or to any county, city, district, or political subdivision of the State, or to the United States, under a lease, lease-sale, or rental-purchase agreement which grants possession of the vehicle to the lessee for a period of 30 consecutive days or more,” the law states.

The “security interest,” UCC-regulated legal owner category refers to a party like a bank that put up the financing for the vehicle, according to Gibson. He said he wasn’t aware of any insurer meeting this criteria.

Separate classifications of “owner” — someone owning the car outright — and “registered owner” — someone registered as the owner though someone else holds the lien — are defined in Vehicle Code 460 and 505, respectively. But 10652.5 protects legal owners, according to Gibson.

The lien limits in Civil Code 3068 protecting legal owners and lessors don’t apply to insurers either, according to Gibson.

The California Department of Insurance already has put out a document explaining an insurer wasn’t a legal owner, according to Gibson.

Featured image: A vehicle taking up valuable bay space might be subject to storage fees. (constantgardener/iStock)