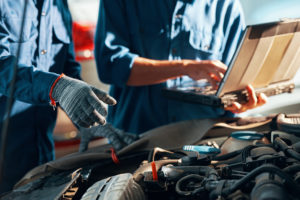 (3) The following rates and fees are presumptively unreasonable:

(A) Administrative or filing fees, except those incurred related to documentation from the Department of Motor Vehicles and those related to the lien sale of a vehicle.

(F) Gate fees, except when the owner or insurer of the vehicle requests that the vehicle be released outside of regular business hours.

Such fees can “be rebutted by evidence,” he said.

For example, if a shop can prove it used a dolly to move a vehicle, it can rebut that its dollying fee was unreasonable, he said.

Asked during the gathering if a shop needed authorization to dolly a vehicle, Gibson said any amount would need to be approved by a consumer.

“In our mind, the customer’s responsible for everything,” he said during an earlier discussion of storage charges. “That’s why you get them to authorize everything.”

Yeung said insurers tend to lump technicians’ work here into the administrative costs category, but from an workman’s comp perspective, this was incorrect.

A body shop paid a certain amount of worker’s comp for a clerical worker under Classification 8810, he said. But the employees performing teardown or blueprinting to develop the repair plan demonstrating the vehicle merited totaling fell under a different classification, according to Yeung.

“It’s not administrative,” he said. “… A technician is creating that.”

WCIRB California even uses a similar example to explain the clerical designation:

“An automobile repair facility employs a bookkeeper to maintain financial records,” it writes. “This employee works primarily in the repair facility’s back office, but occasionally must enter the garage to retrieve paperwork and status reports on specific jobs. In this instance, the bookkeeper cannot be assigned to Classification 8810 because this employee must occasionally enter the garage and is exposed to hazards outside those of a strictly clerical office worker.”

Both estimators and and body technicians appear to fall under Classification 8393, according to WCIRB California.

Featured image: Work done to develop an estimate might bot be considered administrative for the purposes of workman’s comp in California. (DragonImages/iStock)