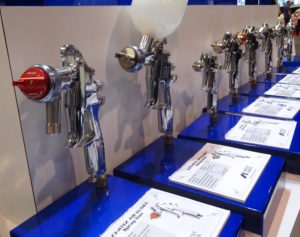 The “Who Pays for What?” surveys demonstrate the fallacy of insurers claiming they never reimburse certain items or see other auto body shops charging for them.

The latest results from the January refinish survey indicate multiple operations for which such an assertion would be especially off-base.

In these instances, around 75 percent or even a larger proportion of the responding shops said they’re paid “always” or “most of the time” whenever they request reimbursement for certain line items. (Though there is a 3.1 percent margin of error.)

The survey drew hundreds of answers from auto body shops about how consistently eight of the nation’s largest insurers agreed to pay.

Here’s some highlights from that list; see others by downloading the entire April refinish report. The data should help consumers or auto body shops quickly end any arguments against those operations from Allstate, Farmers, GEICO, Liberty Mutual, Nationwide, Progressive, State Farm or USAA personnel.

Help the industry by taking the current “Who Pays for What?” survey on not-included body repair operations before the end of the day today. All answers are kept confidential; data is published only in the aggregate.

About 74 percent of the more than 700 responding shops said they were paid “always ” or “most of the time,” up 1.2 percentage points from last year.

An insurer who claims his or her carrier doesn’t pay to blend adjacent panels probably ought to go back to adjuster school, based on the survey results.

The Database Enhancement Gateway, which also contributes to the “Who Pays?” reports, provided a link to an interesting inquiry on this topic from back in 2008.

A user had asked if blending the fuel door would be included in the quarter panel refinish time for a 1994 Lexus ES 300.

“I WAS TOLD IT WAS INCLUDED BUT I COULDN’T FIND THAT INFORMATION,” the user wrote.

“The blend time for the fuel door is Not Included, due to collision scenarios where the quarter panel is damaged but the fuel door is not damaged and does not require refinish,” CCC wrote at the time.

“I think some estimators leave this off because they haven’t been trained to get down to look at the bottom of the fender or rocker,” Anderson wrote. “As a rule of thumb, if a vehicle does not have any rocker covers, it probably has gravel guard.”

However, only 42 percent of shops said they consistently see reimbursement for matching the OEM gravel guard texture.

About 82 percent of shops say they’re “always” or “most of the time” paid to extend clearcoat to its natural break.

It’s a little sad this still isn’t 100 percent, for paint manufacturers polled by SCRS (see here and here) clearly say you need to do it to keep the refinish company’s warranty. Valspar even told SCRS the clear coat might have to spread farther than even a single quarter panel in certain cases.

January 2019 “Who Pays for What?” refinish results

The January 2019 “Who Pays for What?” polling examined various refinish operations. (Provided by CRASH Network and Collision Advice)