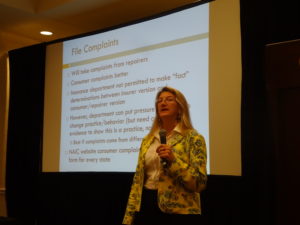 “That is what I was told,” said Eversman, who on April 17 recounted to an SCRS “Repairer Roundtable” insights from her first NAIC summit since being named liaison.

She said when she told commissioners that some agencies wouldn’t hear repairer complaints, they told her it wasn’t true or “‘at least that shouldn’t be true.'” Any interested party could file a complaint.

Eversman encouraged repairers to contact her if they hear differently from their state insurance department, and she would contact that commissioner.

“Do file complaints,” said Eversman, lead counsel for Vehicle Information Services and founder of the Automotive Education & Policy Institute. “… It does get noticed.”

Eversman told the Nashville, Tenn., audience about an interesting conversation with Colorado Insurance Commissioner Michael Conway in which she recounted what seemed to be the problem with complaining to insurance regulators:

Someone complains; the insurer says, “We didn’t do anything wrong”; and the DOI says, “‘The end,'” as Eversman put it. Complainants get frustrated and quit reporting problems.

Conway said the problem arose because his agency wasn’t permitted to make “factual determinations” of who was right. The agency could only recount the insurer’s answer but couldn’t take action, Conway said, according to Eversman.

Both scope and volume matter, based on Eversman’s presentation. (She appeared to be describing what Conway told her, though this wasn’t entirely clear.) Multiple collision repairers filing complaints statewide — as opposed to one city — would help convey an issue is widespread, and the number of complains on a particular topic is what triggers a DOI investigation.

Even though you know you’ll receive no resolution, “it’s still important to go through the act of filing a complaint,” Eversman said.

Asked about complaint best practices, Eversman advised: “Do not whine, do not fuss. Just state the facts.”

Be heard: Individual state complaint websites can be accessed through an NAIC portal here.