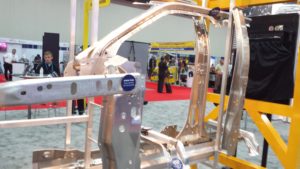 The IIHS’ sister Highway Loss Data Institute late last year concluded that the 2015-16 aluminum Ford F-150 has been less expensive to repair when one accounted for the trends seen in steel truck competitors.

The December 2018 report was the topic of a lengthy Automotive News article Monday and shared with us Tuesday by Ford.

“This approach allows the model to account for the loss trends over time as exhibited by changes in insurance losses for the other large pickups,” the organization wrote.

“… HLDI (2018) indicates that across all vehicles, including pickups, claim severity has been increasing in recent years. This finding is corroborated by the results for the other large pickups, all of which exhibited significantly increased collision claim severity for the 2015 model year, and even higher severities for the 2016 model year, compared with the 2014 model year.”

After compensating for industry trends, HLDI calculated aluminum 2015-16 F-150s posted 7 percent higher claim frequency than the steel 2014 F-150 and other trucks — but severity came in 7 percent lower. These items evened each other out and kept the overall expense constant, according to the study.

“However, two HLDI studies (in 2016 and 2017) found no significant increases in collision claim severity for the aluminum F-150s compared with their earlier steel counterparts,” HLDI wrote in the December bulletin.

The new study had far more data than past research, the organization said.

Ford in 2016 said No. 1 insurer State Farm kept premiums steady from the steel to aluminum F-150, and a spokeswoman told Automotive News in the Monday article that prices were still roughly around where they were on the prior truck generation.

“It was our moonshot,” Ford service engineering operations global director Dave Johnson told Automotive News. “We wanted them to be insurable on par with a steel F-150.”

HLDI did find aluminum F-150s held a larger “loss development” — a term encompassing factors like the length of time it took to pay off the claim and supplemental payments.

“Although the F-150 followed a similar pattern, the magnitude of the effect was less compared with the other pickups,” HLDI wrote. “It is likely then, that the 4 percent increase observed for the 2016 model year is attributable to other, uncontrolled for factors, and is not due to aluminum usage.”

HLDI had no explanation for the increased aluminum F-150 frequency. However, it offered a few hypotheses for the reduced severity compared to the market and what have been historically higher costs to repair aluminum vehicles.

“However, except for the rear bumper and bedside, most part prices remain cheaper for the (2015-16) model,” HLDI wrote. “Note that the bumper prices include the cost of bracing and bracketry, and that the 2014 model requires a small top cover that needs to be painted (this adds approximately $150 to the price). The 2015–16 model year is chrome and therefore does not require additional painting.”

New repairability features: The HLDI credited Ford for thinking of repairability and using a modular F-150 design to help keep down collision bills..

“For example, Ford made the front structure that supports the fenders modular and estimated that it can be replaced in 6–7 fewer hours than the front structure on the 2014 model,” the HLDI wrote. “This component is vulnerable in crashes that account for 15 percent of collisions.”

Subsidizing upgrades: The HLDI also said Ford let dealerships obtain discounts on the potential $30,000-$50,000 cost of the training, infrastructure and equipment to fix an aluminum F-150. The implication is that they didn’t have to charge as much to amortize the cost. Automotive News, however, described only $10,000 in rebates being available. It’s unclear if independent body shops, Ford-certified or otherwise, were eligible as well.

“Repair costs are primarily based on three factors: repair shop overhead, the cost of labor, and the cost of parts,” the HLDI wrote. “Ford has taken measures to address all three areas with subsidies for tools and training, modular designs to reduce repair time, and aggressive parts pricing. This approach appears to be having its intended effect and has helped keep the repair costs down for the 2015–16 F-150, offsetting any potential cost increases due to the intensive usage of aluminum. However, given Ford’s efforts to keep costs down, these results may not generalize to future aluminum-based vehicles. Still, this is good news for consumers. After accounting for increasing trends in claim severity, severities for the aluminum F-150 are currently lower than the prior model.”

There’s another more troubling possibility here, one repairer has suggested: Body shops aren’t charging more to repair aluminum because either a) they’d rather eat the cost than fight insurers on it; or b) the shops aren’t investing in what’s necessary to fix the vehicles properly.

The HLDI demonstrated that the aluminum F-150 did seem to make for more supplements and a longer claim time than its rivals, though these trends had improved over time.

“Although HLDI does not receive information regarding repair times, this could indicate that the aluminum-based F-150s initially took longer to repair, but over time that has normalized as repair shops have gained more familiarity and experience with aluminum repairs,” it wrote.

Only 27 percent of 2014 F-150s had a supplement, but that proportion skyrocketed nearly 10 percentage points to 36 percent of collision claims for the 2015 edition. It hovered around that mark for the 2016 and 2017 model years.

Meanwhile, the steel trucks all had supplement rates of below 30 percent of claims until around the 2017 model year, but the trend was consistently positive all four model years.

The 2015 F-150 also brought a boom in the proportion of collision claims that saw payment information at least two months after the crash date — suggesting repairs were taking much longer than they were on the steel 2014 F-150.

“For non-Ford pickups, the proportion of claims with payment information received 2 or more months after the crash date exhibit an upward trend by model year,” HLDI wrote. “In contrast, for the F-150, there was a sharp increase from 32 percent for the steel 2014 model to 41 percent for the aluminum 2015 model. The proportion then declined for both the 2016 and 2017 models.”

The aluminum F-150 has been closing the gap on both variables relative to the other steel trucks, however.

“Both figures indicate that when the aluminum 2015 F-150 first came out, there was a sharp increase in the loss development time,” HLDI wrote. “However, over time that effect has diminished, both for the 2015 F-150 as it has aged and for subsequent model years.”

After compensating for industry trends, the Highway Loss Data Institute in December 2018 calculated aluminum 2015-16 F-150s posted 7 percent higher claim frequency than the steel 2014 F-150 and other trucks — but severity came in 7 percent lower. These items evened each other out and kept the overall expense constant, according to the study. (Provided by Highway Loss Data Institute)

The Highway Loss Data Institute studied eight of the parts damaged in a 2015 IIHS crash test and found the 2015-16 model year’s versions were on the whole cheaper and even fell in price compared to the components for the 2014 steel F-150. However, 2018 did see many of the 2015-16 parts increase in price while prices fell for their 2014 counterparts. (Provided by Highway Loss Data Institute)