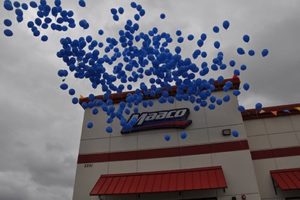 The decisions are all “voluntary” and prompted by franchisees aging and looking to sell their facilities, Maaco resale director Jeff Todd said.

The shops include a mix of multiple-location and single-store Maacos.

Todd said Maaco presented a similar situation to what he previously encountered at Macco’s Driven Brands sister company Meineke, and lessons from his Meineke resale billet could be applied here.

“Not all dealers have kept pace with the change in the industry,” he said.

He said some franchisees call corporate and note that they’re looking to transition out of the business.

At Meineke, he said some owners would reach the end of their term and just shut down, not realizing they could sell their franchise.

Maaco also encounters investor groups which own portfolios of shops which have reached the end of that investment’s lifecycle, according to Todd.

“As part of the franchising resale initiative, Maaco is focused on expanding its regional footprint in Alabama, Florida, Georgia and Tennessee with qualified multi-unit investors who are motivated to pursue aggressive growth goals in their territories and diversify their portfolios in a strong industry like the aftermarket,” Maaco wrote in a news release May 9. “This highly calculated approach includes the opportunity to reopen existing Maaco centers in major markets across the south, including Atlanta.”

Maaco focused on the Southeast because of the specific portfolio there and the region’s booming population growth, according to Todd, who noted there’s “just so much opportunity” for all businesses there. However, similar Maaco resale opportunities are available nationwide, he said.

“We are still growing and working the whole country,” Todd said.

Maaco’s best facility companywide is a single-store operation, and “we couldn’t be happier,” Todd said, and Maaco said it was accepting single-unit investors in the resale push. However, the company is also focused on investors who’d start with a single shop but like to have more, according to Todd.

“Hopefully you want more than that,” Todd said. Maaco wants to talk to entrepreneurs who wish to “”build an empire,” he said.

Maaco thinks it can double in size long-term (the company had more than 500 shops as of its May 9 news release) and plans for aggressive growth over the next five years, according to Todd. Though the company operates across North America, the focus will be the U.S., he said.

Other collision companies are trying to aggressively grow as well, but Maaco doesn’t see them as direct challenges to these plans, according to Todd.

Maaco is “much higher in the walk-in retail,” and the collision work it does is “really light.”

The majority of its business is walk-in retail, though fleet work constitutes a great deal of business too, according to Todd.

In terms of growth, Maaco is thinking of a mix of greenfield expansion and bringing independents into its brand, Todd said. The latter could mean an independent shop looking to become a franchise or buying an independent and branding it, he said; Maaco was interested in starting to acquire market share, according to Todd.

We asked why the traditional collision repair industry was full of investment money seeking to consolidate MSOs, while Maaco seemed to have the retail paint space to itself — despite what Todd suggested was clear room to grow.

Todd said there’s just not many companies doing retail paint work, nor was there a “massive market” for such services because of its cost to the consumer. Maaco also already had a customer base, well-recognized brand name, and plenty of room for growth.

Competitors also can’t get the kind of high margins on paint like Maaco, which can pool its buying power with CARSTAR to command a better deal on coatings.

The company’s business model centers on high-margin, low-dollar paint sales, he said. We asked if this posed a problem in an age of increasingly complex vehicle paint jobs (three-stage, pearlescents, etc.).

Todd said no. We also asked if Maaco was encountering any difficulty with the complexity of vehicles, such as OEM mil thickness limits to preserve a sensor’s function.

However, he said he recently did a tour with a multiple-location owner and was grilling the franchisee to learn more about the business.

“That never came up,” Todd said. It wasn’t mentioned as an issue.

If you’re interested in buying a Maaco, visit http://bit.ly/MaacoResale or email Maaco.Resales@Maaco.com.

Featured image: 500 balloons symbolize each of what at the time was Maaco’s 500th store during a March 9, 2019, ribbon cutting. The ballons were meant as a salute to the Cook Children’s Hospital, one of the Children’s Miracle Network Hospitals chain which is Driven Brands’ partner. (Provided by Maaco)