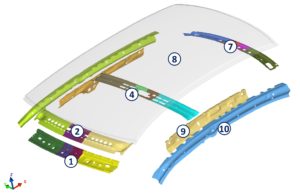 The Center for Automotive Research affiliate’s study evaluated three redesigns for the roof rails, bow/headers, and roof panel of the Accord. The work provides collision repairers with food for thought as to what they might see in the near future.

CAR research engineer and study co-author Shashank Modi cited CALM for being a rare organization dedicated to mixed-material automotive design. Other groups like it only consider one type of substrate, he said.

“I think we are unique,” Modi said of the group, whose members include numerous OEM suppliers.

CALM defined the baseline 2011 Accord roof as containing 10 parts ranging in thickness from 0.7 mm (the roof panel and lower front header) to 1.75 mm (the roof rail outer). Substrates ranged from interstitial-free 140- to 270-megapascal steel (the roof panel) to dual-phase 500-800 MPa steel (the main roof bow/roof arch), according to CALM.

Altogether, the Accord assembly comprised 22.5 kg (49.4 pounds), was 100 percent steel, and had been joined at the factory by spot welds and adhesive bonding, according to CALM.

The official Honda OEM procedures for a 2011 Accord describe the roof panel as 270 MPa mild steel and the roof rails and central roof arch as 590 MPa high-strength steel. The vehicle’s roof panel mostly receives spot welding during repair.

CALM redesigned the Accord’s roof and associated parts to save mass but also retain the strength to preserve roof crush and roof dent thresholds. Other targets included body-in-white bending and torsional stiffness. 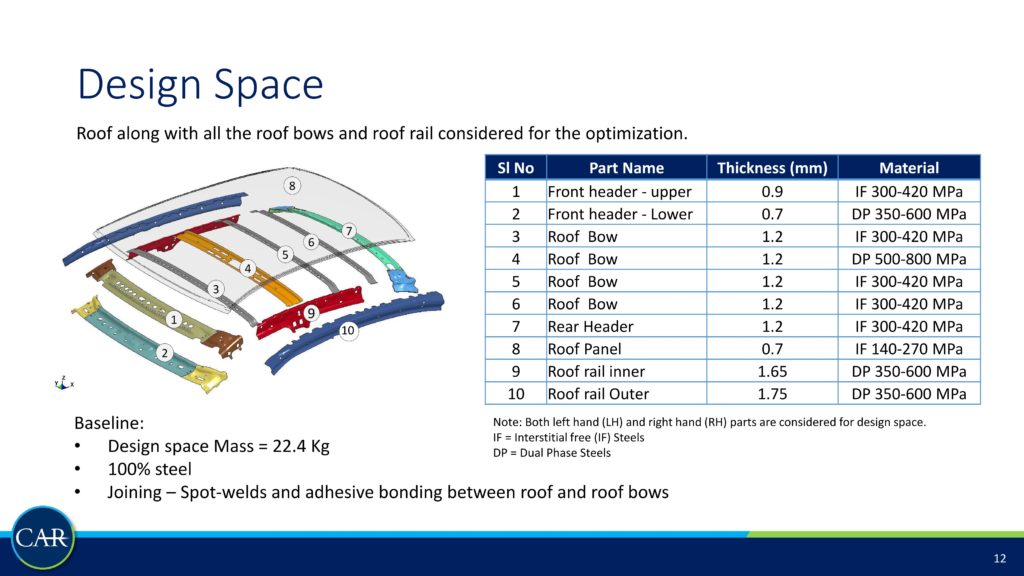 The first CALM experimental roof assembly configuration remained 100 percent steel. It relied upon press-hardened or third-generation steels (1,500 MPa and 980 MPa, respectively) for most structures and 0.65 mm dual-phase 490 MPa steel for the roof panel itself. The design cut mass by 22 percent — 5 kg (11 pounds) — and met all of the performance requirements of the baseline 2011 Accord’s roof.

CALM’s design also managed to remove three roof bows entirely. The only structures perpendicular to the roof rail were the front header, central roof arch, and rear header. (Not counting the roof panel, of course.)

CALM recommended the factory join the various elements retained with resistance spot welding and adhesive, with laser seam welding an alternative. The researchers assessed their version as having minimal manufacturing and service/repairability impact. 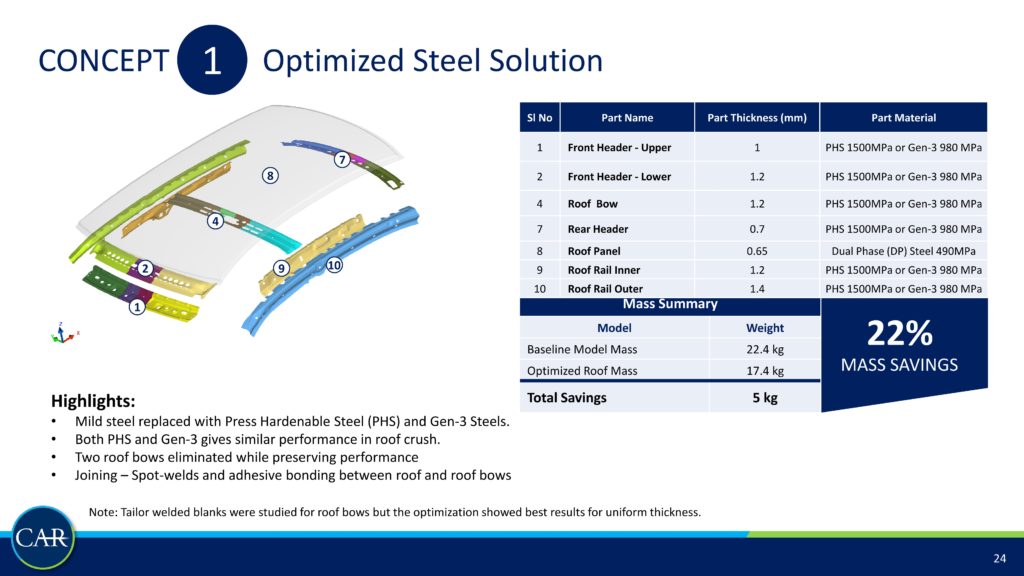 Honda played it a little differently on the 2011 Accord’s real-world successor. The current-generation Accord, which debuted in the 2018 model year, has three other roof bows besides the center arch, according to Honda’s official OEM repair procedures. The roof panel was 340 megapascals and 0.75 mm thick. The center arch is 1,500 megapascals, while the front header is 780 MPa.

A second CALM lightweighting attempt on the Accord cut 8.8 kg (19.4 pounds), or 39 percent of mass, with a mixed-material strategy. Most of that lightweighting came from a 0.9 mm 6022 aluminum roof panel instead of the mild steel roof on the original.

CALM left the roof bows steel but reduced their thickness and increased their strength, something it also did for the roof rails. The researchers jettisoned the IF steel upper front header and replaced it with dual-phase steel front-end attachments. They also added mild steel rear-end attachments.

CALM then opted to replace three other steel parts with glass-fiber components: the roof arch, lower front header and rear header. Despite higher thickness, the parts still weighed less than their steel counterparts.

Factory joining would include MIG-welding the roof bows to the roof rails (the bows have metal ends) and using structural adhesive to attach the roof panel to everything, based on CALM’s recommendations. However, the study felt a factory could also braze the roof panel to the rails. 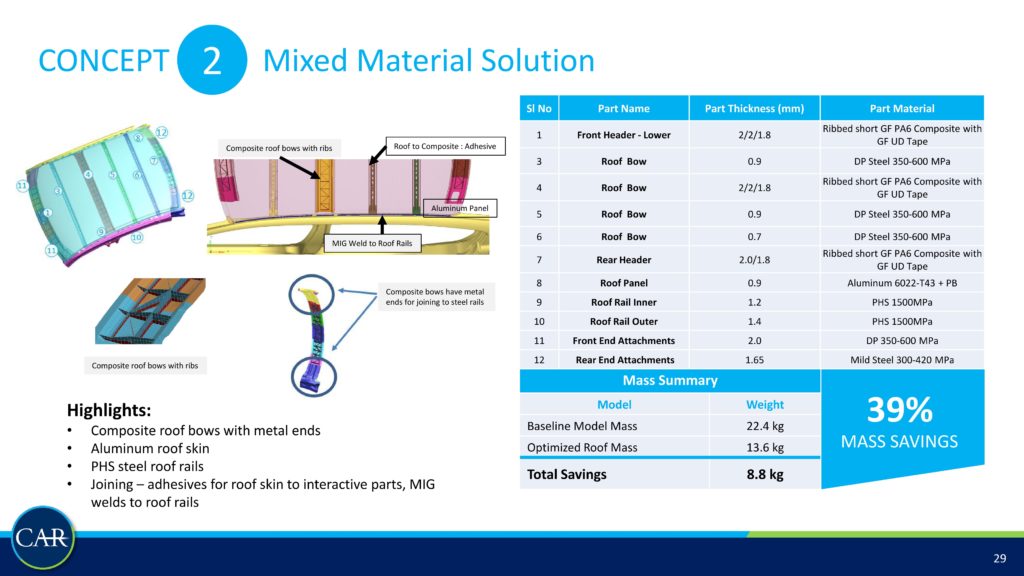 However, the CAR slides argued “If our design space was bigger, we could meet target torsion stiffness by taking a small hit on the percentage of mass reduction achieved.”

The researchers felt the aluminum roof panel would have a medium impact on serviceability and repairability, while the glass-fiber bows would have a significant impact. But at the factory level, the disruption would only be low to moderate, according to CALM.

According to CALM, the composite bows would cost 4 times as much as the original steel versions, while the roof panel would only be 1.5x.

CALM’s third attempt cut 40 percent of the mass for a savings of 9 kg (19.8 pounds) despite doing nearly everything the same as in the aluminum example above.

The difference involved switching out the 0.9 mm aluminum roof panel for a 1.5 mm carbon-fiber panel. Despite its increased thickness, the carbon-fiber version only weighed 4.2 kg compared to the aluminum’s 4.4 kg. (The mild steel original panel was only 0.7 mm thick but weighed 10.05 kg.)

CALM recommended an OEM MIG-weld the roof bows to the roof rails and use adhesive to connect the carbon-fiber roof panel to the rest of the structure. 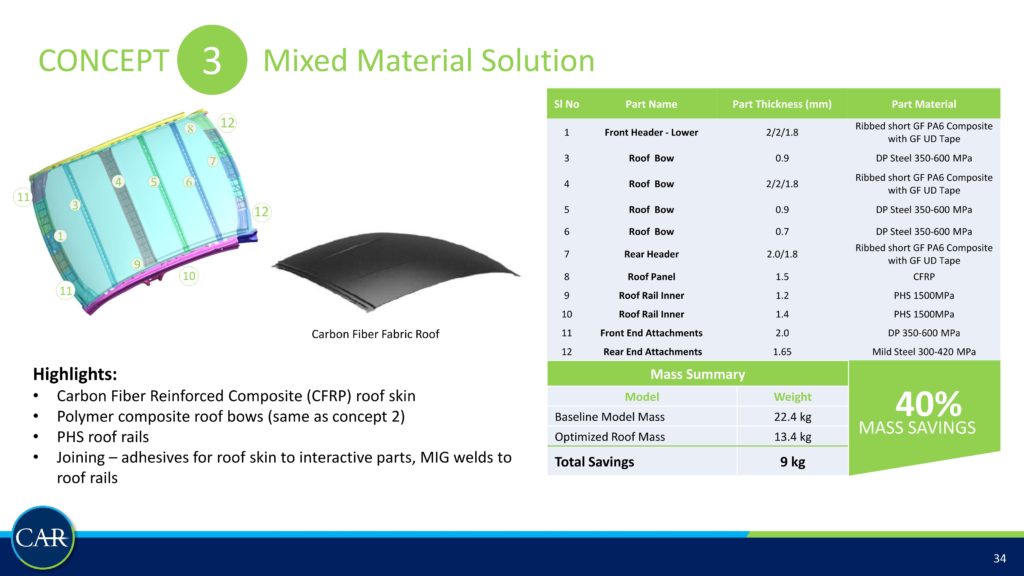 Switching to that option could have a heavy impact upon a factory, including upon the paint shop, and the carbon fiber would cost 6.5 times the amount of the mild steel. From a service and repair perspective, it would have a high impact too, CALM felt.

In terms of performance, the carbon-fiber roof met all the targets except torsional stiffness; it only reached 74 percent of the goal.

Asked if larger torsional deviations like those seen on the aluminum and carbon-fiber roofs would be close enough for an OEM, Modi on Tuesday said all OEMs had their own internal targets.

He noted that an automaker might choose to cut a little less mass to meet a performance target. Or perhaps the OEM would strengthen the B-pillar, which wasn’t studied here.

The point of the study was to show that a mixed-material strategy could remove significant mass but meet requirements, Modi said.

Asked if OEMs felt serviceability and repair disruptions were less of a deal-breaker than the other considerations CALM studied, Modi said “it does not take a backseat.” However, it was not a “big hindrance” either to an OEM’s plans, he said.

Modi gave the example of Ford switching the F-150 to aluminum. The OEM concluded it could live with making the extra effort to train the aftermarket, he said.

Modi said he wished the study had been able to examine an all-aluminum version of the roof, and CALM would try to explore this in the future. Future research topics could include testing the experimental roofs in a side impact, modifying the B-pillar for the torsional stiffness discussed above and taking panoramic sunroofs into account, according to the slides.

This 100 percent steel design by the Coalition for Automotive Lightweighting Materials eliminates roof bows on the 2011 Honda Accord, reduces mass but preserves performance targets. (Provided by CALM)

The roof assembly design on the 2011 Honda Accord weighs 22.4 kg. (Provided by Coalition for Automotive Lightweighting Materials)

This aluminum, fiberglass and steel design by the Coalition for Automotive Lightweighting Materials would reduce mass on the 2011 Honda Accord but largely preserve performance targets. (Provided by CALM)

This carbon-fiber, fiberglass and steel design by the Coalition for Automotive Lightweighting Materials would reduce mass on the 2011 Honda Accord but largely preserve performance targets. (Provided by CALM)