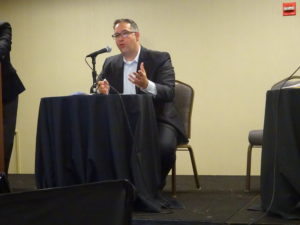 But lately, the concerns and questions from SCRS members seem to have come in at a “very increasing pace,” and the volume suggests it’s no longer an anomalous issue, he told the Wednesday SCRS open board meeting in Indianapolis, Ind.

Schulenburg gave a similar assessment of the problem and SCRS’ work on the issue to the Collision Industry Conference later that day; quotes and information from both are present here.

It used to be a “once-every-couple-months call,” Schulenberg said. Now, he’s working on it weekly, he said.

Schulenburg said the volume of inquiries SCRS has received on this topic over the past 18 months to two years can’t be explained away. There are “countless” examples of independents, MSOs and dealerships writing estimates and seeing the vehicle reflected on vehicle history reporting sites like CARFAX and AutoCheck, he said.

In some cases, publicly available records such as police reports might be to blame, Schulenburg said.

However, many of the shops with issues might be merely preparing a car for a dealership, Schulenburg said: a mere buffing is flagged by the vehicle history company.

When an estimate started but not even locked is reflected on a vehicle history report, “that’s concerning,” he said.

Even test estimates of a crash that “never occurred” are appearing on vehicle history sites with a damage report, Schulenburg said.

When this is reported to the vehicle history companies, it can mean they are unable to resolve the false data without the reporting party indemnifying the site with written consent and providing permission to use the VIN and vehicle history, according to Schulenburg.

Considering that neither was solicited or provided at the time the vehicle history check company added the phony data, “they certainly shouldn’t have to be given to remove it from the vehicle history,” Schulenburg said. “So I think we’re exceptionally concerned.”

Schulenburg said SCRS hadn’t yet traced how this was happening to report the answer to CIC.

But many businesses in the industry are acting responsibly in how they manage and handle data, Schulenburg said. He said he thought they would be interested in those companies “irresponsibly” handling and transmitting data and seeing them held accountable to transparently revealing those practices. Then repairers could choose whether or not to do business with those companies, he said.

As laws like California’s Assembly Bill 375 seek to expand consumer rights to request where their data has gone or that it be deleted, Schulenburg said he doubted most shops could answer those questions in an educated manner. (AB 375, which takes effect next year, affects businesses doing more than $25 million annually or with 50,000 annual customers’ records.)

Most repairers would say no if asked if they share data, but “the reality is: The answer is yes,” Schulenburg said.

Shops think, for example, “‘I’m ordering a part,'” without realizing the business partner’s access to EMS data files leads to customer data being shared, he said. EMS files are created when the estimate is, he said. “Data pumps” installed by various business partners to facilitate software B2B communication can also capture EMS data on estimates for which they have no role.

See some more discussion of the issue and how to manage data pumps here and here.

Repairers might wish to read software terms of use and check what the company says it’ll do with your data. It might also behoove a shop to require vendors and other business partners to agree to the repairer’s own set of conditions and confirm they’ll act as the shop desires regarding data.