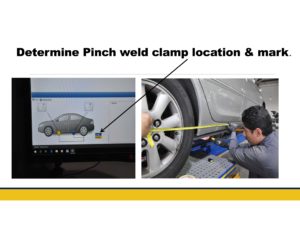 Having standard operating procedures in place might prevent what an informal July 25 CIC audience poll found to be delays at least six times a year after a vehicle is put on a frame machine.

“Why is that happening?” Collision Industry Conference Technical Committee speaker Toby Chess (Kent Automotive) asked the audience after the poll.

He’d asked how frequently “the repair process stops due to something lacking in the repair process?” after a vehicle is already on the frame machine. Overwhelmingly, the answer was more than five.

Chess argued that many shops just work on a “daily basis” without examining the larger picture. “Whatever comes up, they do it,” he said.

By establishing a standard operating procedure, a shop can be more efficient, according to Chess.

“You should have SOPs for everything,” Chess said. He said this advice was true for the entire industry, from single-shop companies to national consolidators.

SOPs were the only way to work on the advanced vehicles in today’s fleet, according to Chess.

Standard operating procedures should be “simple and concise” for technicians, Chess said, noting he’d seen one where one operation spanned five pages.

In a slide (see all slides here), he also advised eschewing ambiguous terms like “periodic,” for there’s no “tangible meaning.” The same goes for softer words like “may” and “should” when “must” (or “shall”) is the intent. The subjectivity introduced by the wrong word could affect the repairer’s ability to leverage the SOP for consistency.

Chess also encouraged using pictures and marking up the vehicle. 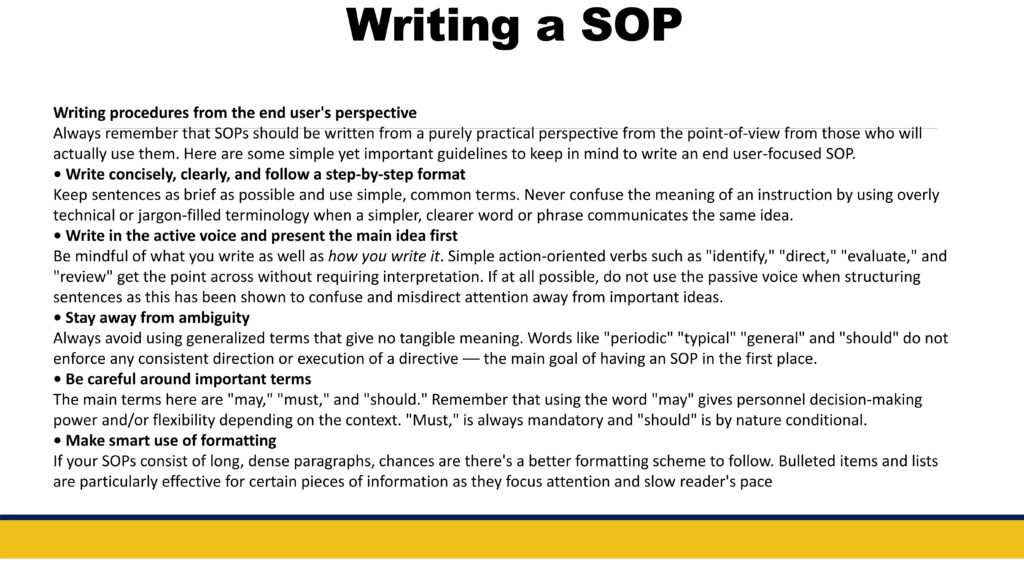 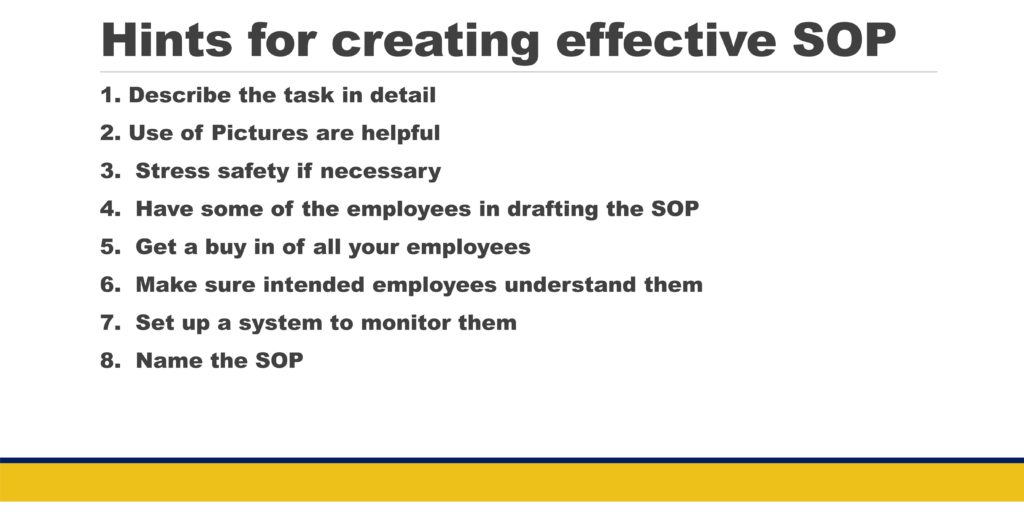 He offered an example of this advice with a 24-step SOP for frame/benching a vehicle, accompanied by slides of the steps with photos.

He said upon the introduction of this SOP at an unspecified shop a few years ago, cars enter and exit the frame machine in a “timely fashion.” The amount of times the process stops because of an item’s absence is “virtually zero,” Chess said, attributing this to the SOPs. 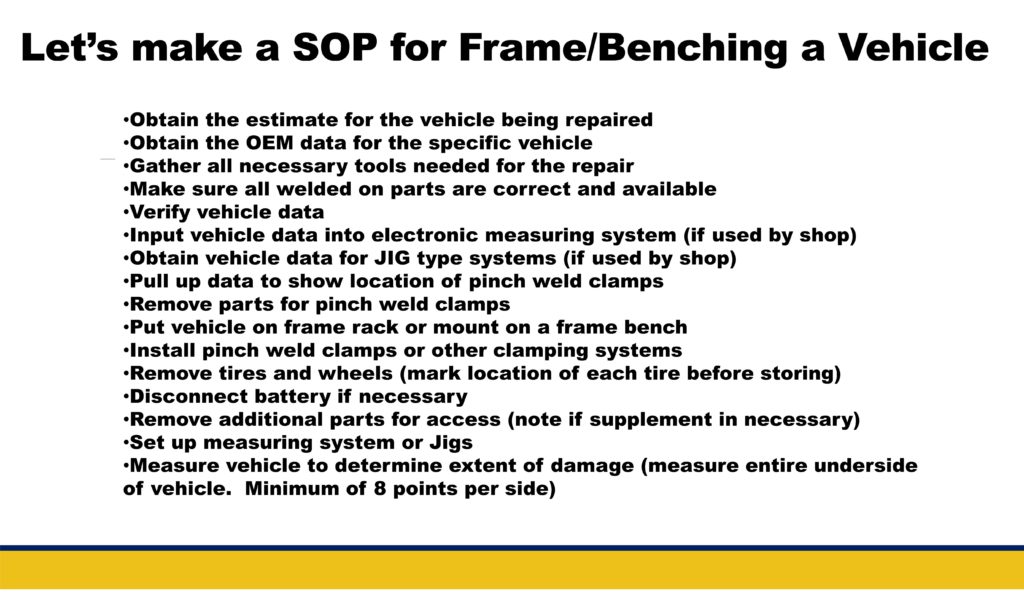 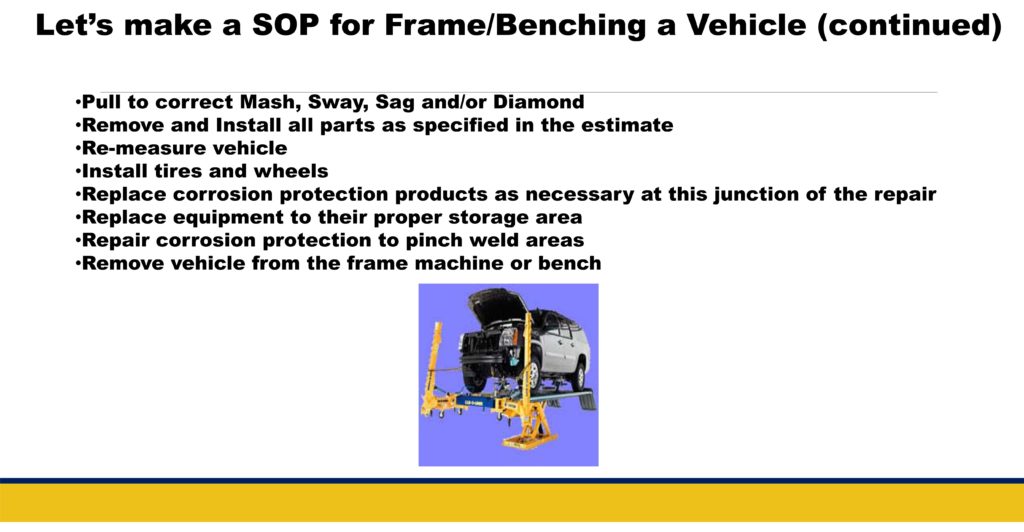 Chess singled out some items on the SOP for further discussion. Among them:

One of Chess’ SOP steps was to “Gather all necessary tools needed for the repair.” Otherwise, grabbing equipment on a tool by tool basis means “you’re losing time” every time a repairer walks from the bench to a tool station.

He noted that the operation he captured for the SOP saw work stopping because of the absence of an S hook and an extra chain. Chess said he introduced a metal cart holding chains, S-hooks and clamps, and the SOP now includes bringing this cart over to the bench area. 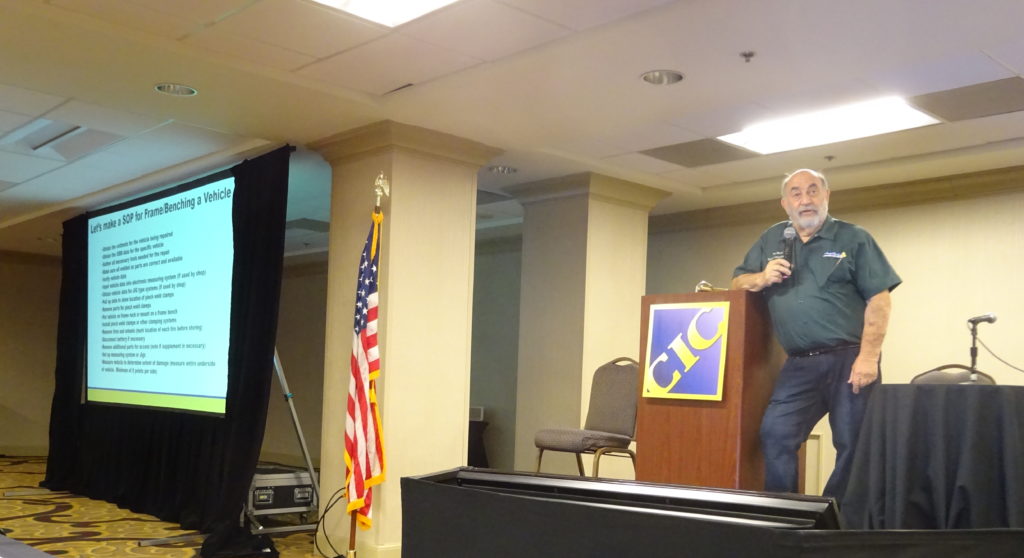 The SOP also included determining and marking the location where the manufacturer has said they desire clamps to be installed. Chess wondered how many technicians were actually doing this in the industry compared to just sticking the clamps “wherever they want.”

The step of removing the tires and wheels should include marking each tire’s location, according to Chess’ presentation. Some wheels are side specific, he said.

“Here is a real point of contention,” he noted. He said he thought the general consensus was at least eight. (Which is listed as the minimum per side in the SOP.) The measurement should also encompass the entire vehicle, not just the front or rear, he said.

Chess didn’t elaborate, but one reason for measuring the entire vehicle even if one end “looks okay” has to do with the crash energy management built into the vehicle’s structure. An OEM might, for example, design the force of a frontal crash to travel through higher-strength steel parts like a roof rail and frame rail to the back of the car, thereby keeping it away from the occupants inside the safety cage. Slow-motion IIHS crash footage provides an easy and dramatic way of demonstrating the concept to consumers and insurers. For example, here’s the back of a Top Safety Pick+ 2019 Subaru Ascent clearly pulsing from a small-overlap front impact despite “looking OK” post-crash.

Chess also noted a slide showing a post-repair measurement on a Toyota Camry reaching nearly 0-0-0 accuracy, a reference to the point sitting in the correct place in the X-, Y- and Z-axis planes. He said Toyota specifies 0-0-0 precision because a part with, say 3 mm tolerance during the build is moved an extra 3 mm post-repair, “we’re off 6 mm.”

Chess called it “amazing” to see the efficiency of how employees worked as a team.

The SOP would be a checklist, Chess said. A technician would add the repair order number and date, check off everything and turn it in along with relevant paperwork. (Such as the measurements.)  “It all goes in,” He said.

“Standard Operating Procedures — The How and Why”