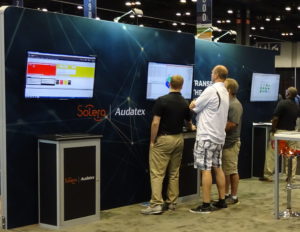 Here’s our latest monthly roundup of areas spotlighted as tip-worthy by the DEG. To receive the tips as soon as DEG releases them, like/follow the DEG’s Facebook and Twitter feeds. (It also posts videos to a YouTube channel once in a while.) Or just browse the nearly 15,000 inquiries and responses in the database and see what else you learn.

The DEG in an Aug. 12 tweet alerted collision repairers to revisions in Audatex’s Database Reference Manual.

Considering the importance of P-pages in clarifying what’s included in a stock labor time and what needs to be added manually, it’ll be critical that estimators and adjusters review the changes.

One significant addition includes a definition of “Continuous Clear.”

According to the revised P-pages:

Continuous Clear is defined as the application of clear coat to an undamaged adjacent panel when no breaking point exists between panels.

As a user defined entry, a Continuous Clear labor allowance is based on the estimate preparer’s judgment, expertise, and consideration of the unique requirements of each repair. Entered in the Blend Refinish Labor Field, the adjusted time includes all necessary operations such as prep sanding, precleaning and masking, along with mixing of materials, application of clear, flash, and final steps/cleanup.

When continuous clear is applied, the labor allowance includes the application of clear coat to the entire adjacent panel.

Another change involved Audatex clarifying “A/C line disconnect / connect” and “Line Cap Off” should be considered part of the broader “A/C condenser R&I” operation. The DBRM treats that “A/C condenser R&I” as included in certain scenarios regarding new and recycled parts but not included in other recycled parts operations, so you might want to double-check the P-pages before making any assumptions.

Many procedures related to replacing the rocker center pillar are also clarified as included when the part is new, the DEG also pointed out. A prior generation of the DBRM failed to provide check marks sorting those operations into either the included or not-included category.

The DEG tweeted another Audatex-related tip Aug. 5, this one related to headliners.

A July 12 DEG inquiry referenced in the tip explained that the “replacement headliner does not come with precut holes for the sun visor courtesy lamps or microphone hole” for a 2015 BMW “320XI” (possibly a reference to a BMW 320i xDrive).

The user asked Audatex to clarify if the time to measure and cut the holes were included, suggesting it would take an hour.

Audatex said it would have to be a manual entry.

“We have reviewed the current OEM procedure for the HEADLINER,ROOF (GN 0377),” Audatex wrote. “According to Database Reference Manual ‘Repair, fitting or modification of new replacement parts (unless part is being sectioned)’ is not included in our times provided. The customer would have to use manual entries to consider that additional time. No change warranted at this time.”

DEG Administrator Danny Gredinberg in an Aug. 15 video also included as a tip demonstrated what he called a “pretty cool” Mitchell feature.

Noting that replacing a radiator support can lead to a grey area into what’s included, Gredinberg showed how clicking on the radiator support operation for an unspecified vehicle (based on the part number, it appears to be a 2014-19 Infiniti) will bring up line notes. Those notes discuss what is included in the 6.5-hour base labor time.

A Mitchell user also then has the option for an “Add to R&R Radiator Support” add-on which allows the user to select other possible operations, according to Gredinberg’s video. He demonstrated how a 1.6-hour R&R or R&R base model mechanical components option could be tacked onto the estimate. A line note states that this time “Includes R&I/R&R A/C Condensor Assy, Air Bag Sensor, Power Steering Cooler.”

A base model radiator support might only require 6.5 hours, but a user might want to add more tasks in this fashion to a a vehicle with more options, Gredinberg said in conclusion.

Did the estimate of record get the labor rate wrong? The DEG in an Aug. 22 video used in a tip explained how to fix this in CCC.

Gredinberg said that when a CCC user creates a supplement, they can apply a new labor rate “versus the approved estimate of record” amount.

If you simply input that rate and move on, the new value won’t apply to the estimate of record, only the supplement, according to Gredinberg.

The second seems to be even easier. CCC offers an option to “Apply Rates Retroactively” on the supplement rate screen. By clicking on this, the supplement’s rate will be transferred to the prior estimate of record as well, according to Gredinberg.

“Retroactively apply labor rate to supplements and estimate of record.”