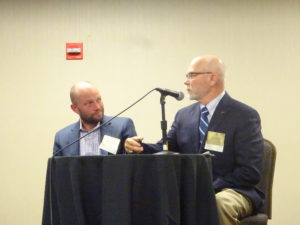 Calibration can be a profit center but potentially require an investment in one’s facility, based on one MSO’s presentation last month to the Collision Industry Conference.

LaMettry’s is a nine-location chain that fixes about 1,200 vehicles a month. As of the July CIC, it performed 7-10 calibrations daily — up from 3-5 a week when it purchased its first calibration station in November 2018. The chain now has one such station at a mechanical facility and another at a collision center, and it plans to add a building that will be more dedicated to calibrations.

The company has tried to place the stations strategically relative to its shops to minimize how far vehicles must travel for the operation, according to Amberson. He said these trips are often done with the vehicle on a flatbed truck given safety concerns associated with driving an calibrated vehicle.

Prior to Amberson’s part of the session, CIC Emerging Technologies Committee member Chuck Olsen (AirPro) provided a general set of static calibration center facility requirements. He recommended a shop’s static calibration area span at least 30 feet by 50 feet and be clear of any debris, equipment and signage with a pattern. The space should have level and non-reflective floors and walls, according to the presentation, which recommended flat white paint on the walls and flat grey paint if necessary on the floor. 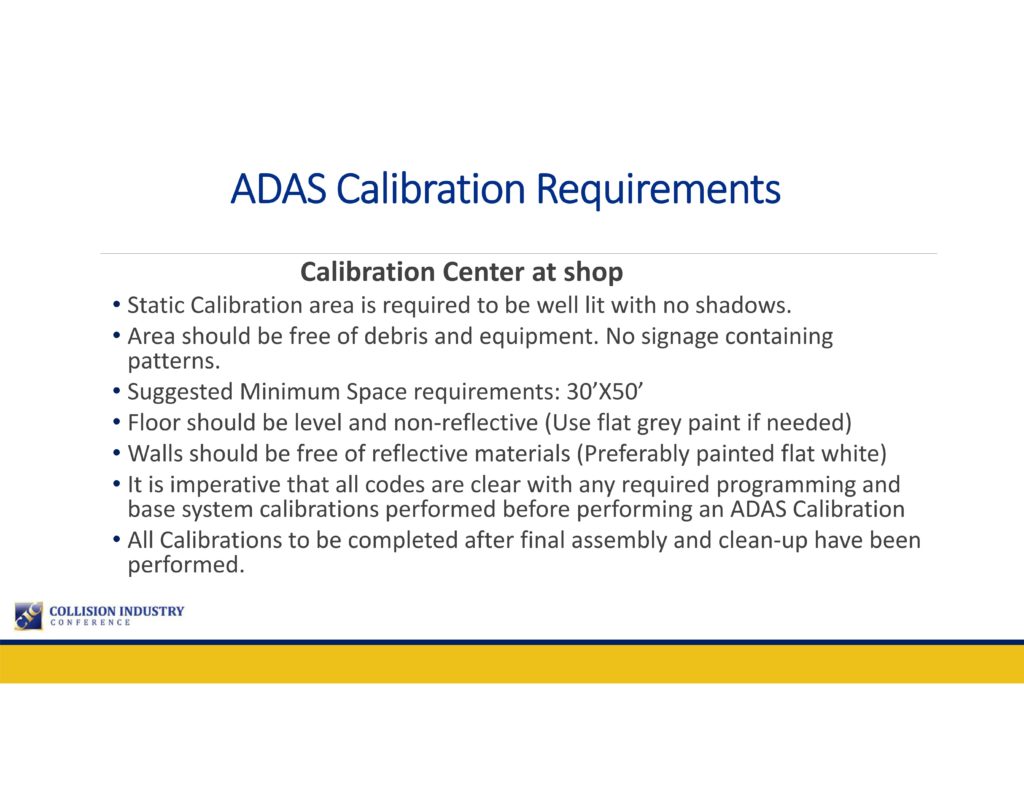 Amberson said a space 60 feet by 40 feet would be enough to handle “virtually all calibrations,” but his company has learned most static calibrations can be done with a “little bit less” space.

Amberson said the mechanical shop originally was designed with a drive-through, and LaMettry’s converted the area into a kind of “expandable stall” it can use for calibrations.

“A few calibrations can be done on a mobile basis, such as in a shop aisle,” a slide from his presentation stated.

Amberson agreed a level floor was needed but noted this rarely existed in the collision industry due to drainage. (A Collision Hub “Repair University” on aiming headlights made a similar point.) Sometimes, LaMettry’s has to compensate for this to calibrate a vehicle, he said, and gave the example of calibration stations that allow for a vehicle to be leveled by placing it on an alignment rack.

(We should at this point offer the usual caveat: OEMs typically only vouch for their own calibration equipment, procedures and scan tools. Deviating from these might introduce an additional risk to the repairer.) 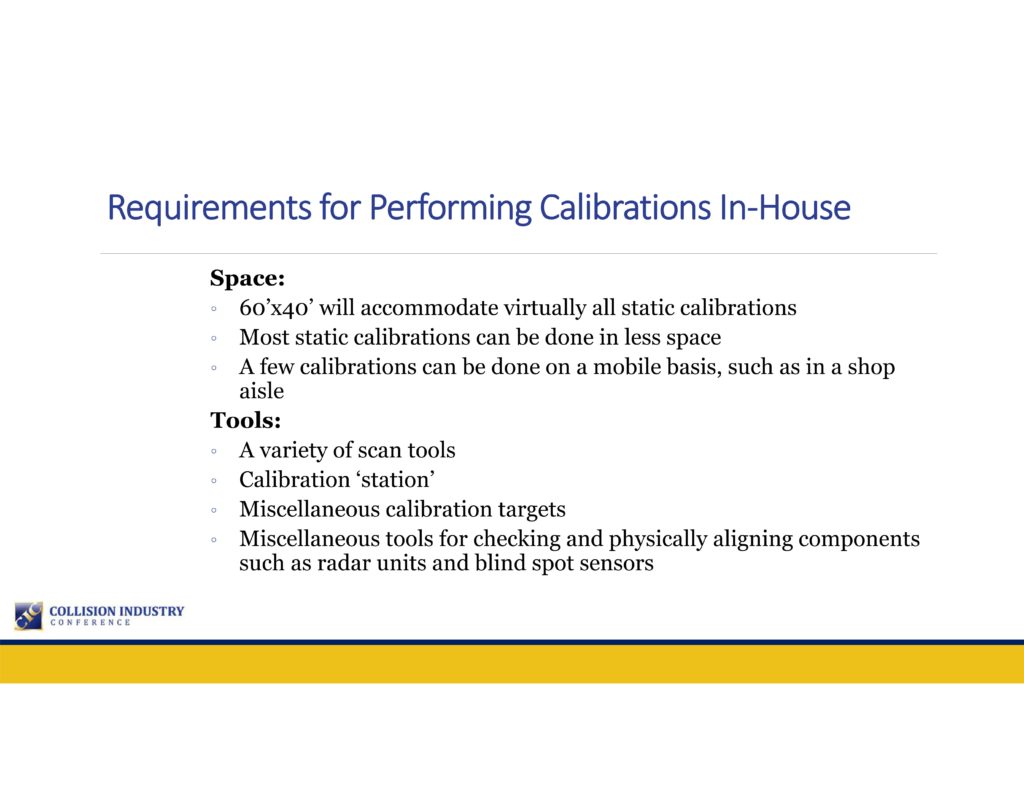 He said LaMettry’s has tried and uses many different scan tools, and most of the high-quality aftermarket and OEM ones will suffice for calibration.

A calibration station — a spot and equipment to perform calibrations — “really becomes a necessity” if a shop plans to significantly handle the procedures in-house, he said. Miscellaneous calibration targets in-house also are helpful to handle some calibrations on a “mobile basis,” he said.

Amberson observed that it seems like the MSO’s mechanical manager approaches him “virtually every week or two” with a request for more equipment.

“As a general rule, I’m saying yes,” Amberson said. Things are changing so rapidly, he said.

Miscellaneous tools can also be necessary to adjust the physical part prior to the electronic calibration, Amberson said, citing as an example some devices which “kind of look like the old-fashioned headlight aimers.”

Insurers can sometimes be critical about the facility’s charges considering how quickly the calibration can be completed, but it’s important to remember the equipment needed, he said.

“It’s not a cheap endeavor,” Amberson said. It’s expensive to equip a shop to handle most vehicles, he said.

He said LaMettry’s has a separate mechanical repair business with its own tax ID number, and it bills calibrations to that entity. It argues to insurers that this is the same as sending work to any other third-party vendor. “It’s a sublet invoice,” he said, and LaMettry’s attempts to price accordingly.

In terms of pricing, “it’s the Wild West out there,” Amberson said. Some shops agree when an insurer argues for a “nominal amount,” while other shops charge more. Pricing is “all over the place,” he said.

Calibration between November 2017 and October 2018 saw a wide spread between the amount shops charged or billed sublet per calibration, CCC also reported earlier this year in its 2019 “Crash Course.” The average cost was $167 — but with a standard deviation of $250 and outlier fees reaching beyond $7,000. Most calibration was sublet.

The average fee rose to $207 for current-model vehicles, CCC reported. 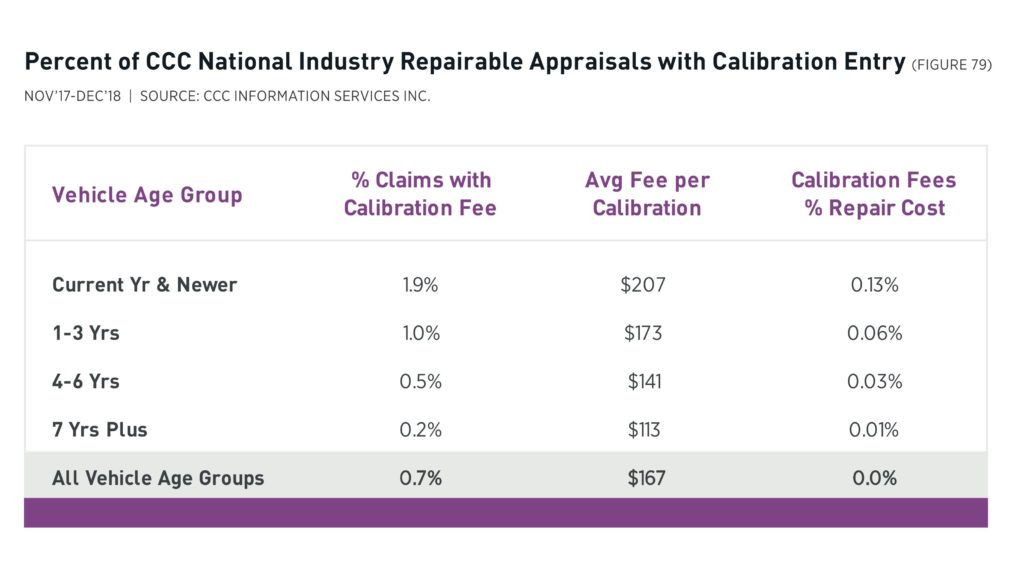 Amberson said July 25 he felt charges would normalize over the next 1-2 years.

“It can be a profit center,” he said. “I think it should be treated as such.”

He said he felt calibration would increase as a portion of the company’s business.