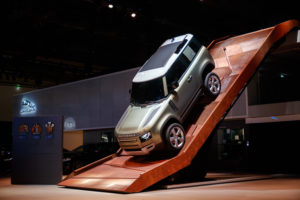 “Land Rover’s new purpose-engineered D7x (for extreme) architecture is based on a lightweight aluminum monoque construction to create the stiffest body structure the brand has ever produced,” Land Rover wrote in a Sept. 10 overview.

“Three times stiffer than traditional body-on-frame designs, it has been engineered to withstand Land Rover’s Extreme Event Test procedures and provides the perfect foundations for the fully independent air or coil sprung suspension while supporting the latest electrified powertrains.”

A Sept. 10 news release said the Defender had torsional rigidity of 29 kiloNewtons per degree.

“The monocoque construction of the new Defender is effectively three dimensional, so there’s so much more strength in the vehicle, for example the roof adds to the overall body strength,” Havas Formula associate director Andrew Brudnicki, a Land Rover spokesman, wrote in an email Sept. 10. (The roof is also strong enough to handle a dynamic load of up to 370 pounds of cargo and a static load of 661 pounds.)

“The body of the new Defender is aluminum intensive. There are other materials used strategically around the body and vehicle but we’ve only used the right material in the right place, each for a benefit.”

The structure appears to be more unibody than true monocoque. Brudnicki said he’d look into which designation would be more accurate, but we haven’t yet received an answer.

“This is our vision of a modern Defender,” Land Rover Chief Design Officer Gerry McGovern said in a statement. (Emphasis removed.) “The clean body side contrasts dramatically against the sheer verticality of its front and particularly its rear to create a reassuringly purposeful stance. The overall impression is of an elemental design, yet this clean reductive approach is underpinned by sophisticated surfacing of the highest quality.”

The OEM in a Sept. 10 news release said no body-in-white panels from other Land Rovers carried over to the Defender. 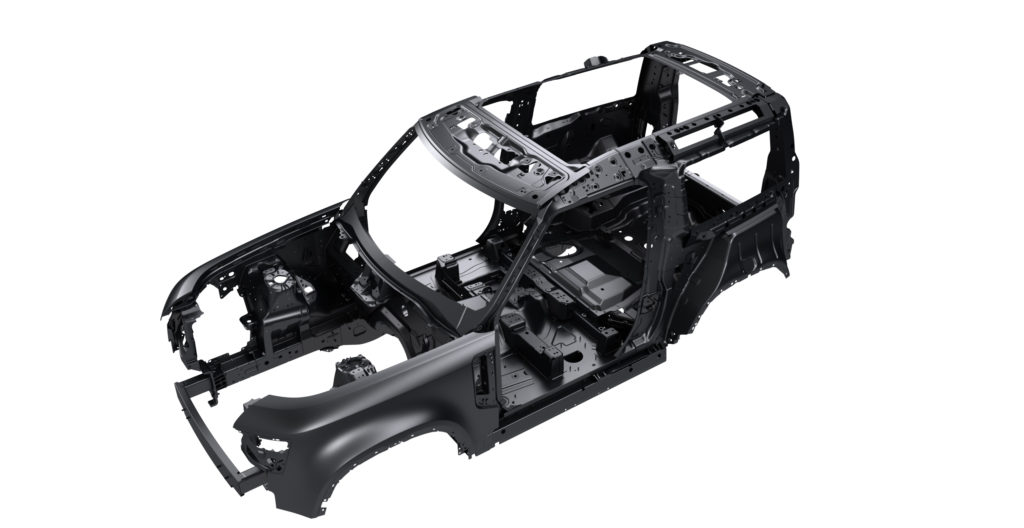 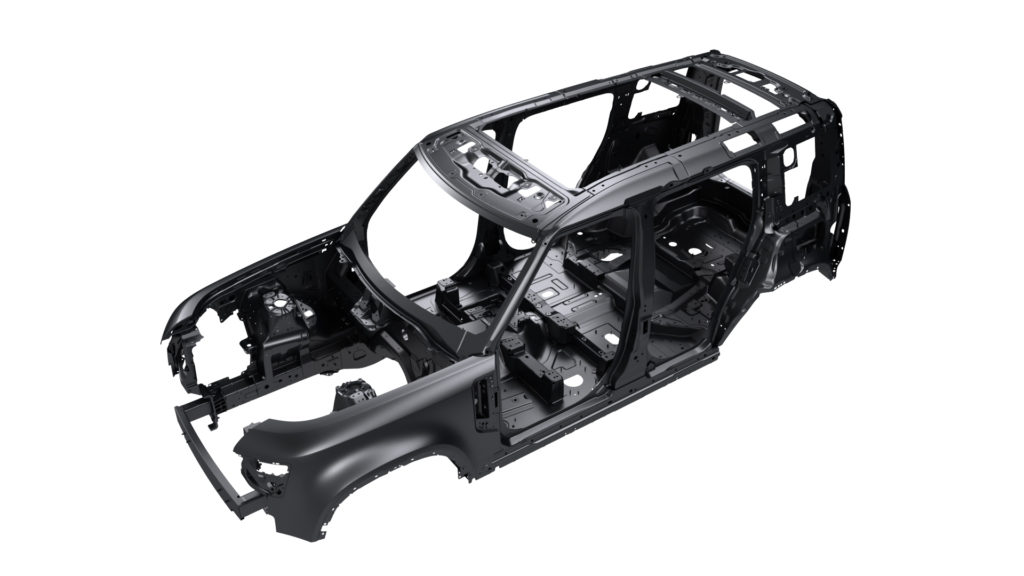 “To retain the famous Defender silhouette, accommodate a family of body styles and support the latest range of powertrains, the Land Rover brand has developed the new all-aluminum D7x platform,” Land Rover wrote. “It has the unique combination of practicality, flexibility and capability expected from a 4×4 wearing the Defender name and doesn’t share a single body-in-white panel with another Land Rover model. This commitment to engineering integrity means the Defender has its own line in body assembly at the new manufacturing facility in Nitra, Slovakia.”

The vehicle also is strengthened by an “exposed, powder-coated magnesium cross car beam” — which can be finished in different colors.

“This structural die-cast magnesium alloy beam, which is available in a range of finishes, features integrated grab handles to aid entry but also for a secure grip when the vehicle is performing technical off-road maneuvers,” Land Rover wrote.

Land Rover said the vehicle’s color palette is modular between the interior and exterior given the amount of exposed body parts inside the vehicle. Three new metallics — Tasman Blue, Pangea Green and Gondwana Stone — are unique to the Defender. 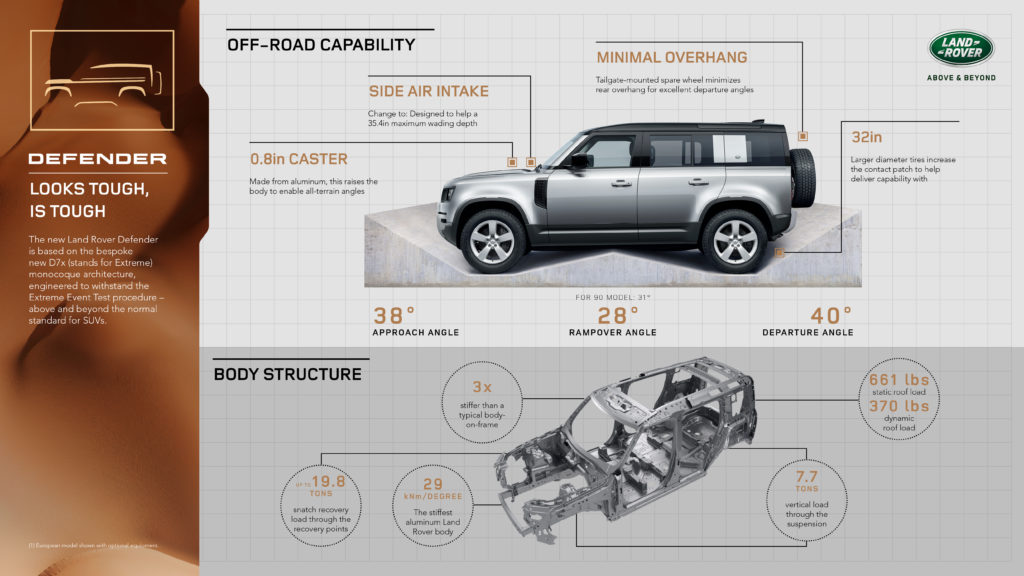 Another aesthetic item repairers might notice is Land Rover’s first ever optional factory film, called the “Satin Protective Film.” According to Land Rover:

The PU-based wrap is applied to external bodywork and gives the standard metallic paint a rich and contemporary satin finish, showing the sophisticated surfacing of the exterior design in the best possible light.

This durable wrap meets rigorous standards and has been developed for the highest performance in extreme conditions.

The film can be removed at any time, making it significantly quicker to repair than standard paint finishes. It is available with Indus Silver, Gondwana Stone and Pangea Green paint options, is solvent free and contains no volatile organic compounds (VOCs).

Repairers could also notice extensive customization in the form of accessories.

Land Rover said Defender buyers “can also select from the widest range of accessories ever produced by the Land Rover brand, including a choice of four Accessory Packs: Explorer, Adventure, Country and Urban.” However, they can also mix and match accessories too, Land Rover said.

The Explorer Pack adds a 57-pound roof rack, arch protection and a matte black hood decal, among other elements.

“Customers can also upgrade the Explorer Pack with Fixed Side Steps and a Deployable Roof Ladder, while the Front Expedition Protection System adds a Front Undershield and ‘A’-Frame Protection Bar with raised corners to improve the front approach angle,” Land Rover wrote.

“A selection of Side Tubes and both Fixed or Deployable Side Steps are available alongside a selection of Accessories such as a full range of durable deep-sided rubber mats to further protect the interior,” Land Rover wrote. (Emphasis removed.)

While not all of what we’re describing here will be standard, there’s a lot of wild technology repairers could potentially need to restore, recalibrate, or otherwise be cognizant of, including:

Cameras: The front-jump-seat Defenders come with a rearview mirror able to be switched to a rear camera feed for even better visibility than the mirror. “The clever technology provides a 50-degree wider field of vision over a traditional rear view mirror, effectively removing the rear pillars and spare wheel from the driver’s line of sight, to assist in eliminating rear blind spots.”

A 3D surround camera is integrated into systems like “Wade Sensing(13) and ClearSight Ground View(15) transparent hood technology, to improve visibility of the vehicle’s surroundings.”

ADAS: Blind spot assist steers you away from merging into a vehicle in the blind spot. Other ADAS includes adaptive cruise control, lane keeping, driver monitoring, autobraking, traffic sign monitoring, “Rear Pre-Collision Monitor” — which flashes your hazards when some idiot is about to rear-end you. And that’s just some of what’s available.

OTA: 14 modules on the vehicle are able to download updates over the air. 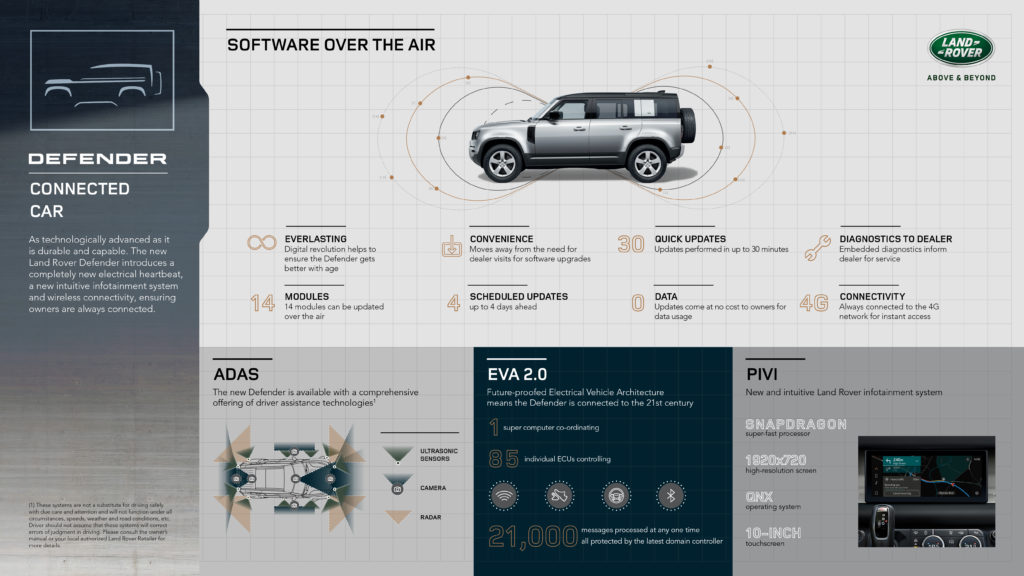 Brakes: Land Rover said the Defender is the first with “next-generation braking technology”:

The system comes into its own during low-speed off-road maneuvers and, when the Traction Control and Emergency Braking(18) systems are triggered, it can lock a wheel within only 150 milliseconds – versus 300 milliseconds with a conventional set-up.

In everyday use, the benefits include Hill Launch Assist with Enhanced Hill Hold(7), which are designed to help prevent the vehicle from rolling back on inclines when engaged – leaving the driver to focus solely on pulling away and negotiating objects ahead – with a smoother transition from the brakes to power in adverse environments.

Trailer: You can steer the trailer from a center console controller if the vehicle has Advanced Tow Assist. Also, the customer can manipulate the rear ride height of the Electronic Air Suspension to make it easier to hitch a trailer.

Changing the ride/Wade assist: You can tailor your ride much more extensively than in the original Defender — or the system can sense the terrain and do it for you.

In the original Defender model, drivers could lock the central differential manually using the high-to-low range gear selector. In the new Defender, drivers can prevent cross-axle slip using the Center Slip Limited and Center and Rear Slip Limited options on the central touchscreen controller. In addition, there is a choice of three settings for the throttle and gearbox response, steering and traction control, allowing experienced off-roaders and all-terrain novices to tailor the vehicle set-up to suit their requirements. The system allows four individual profiles to be saved, so different drivers can quickly activate their preferred settings.

Alternatively, the intelligent Auto functionality of the available Terrain Response® 2 system can recognize the driving surface and configure the vehicle appropriately with no input from the driver. 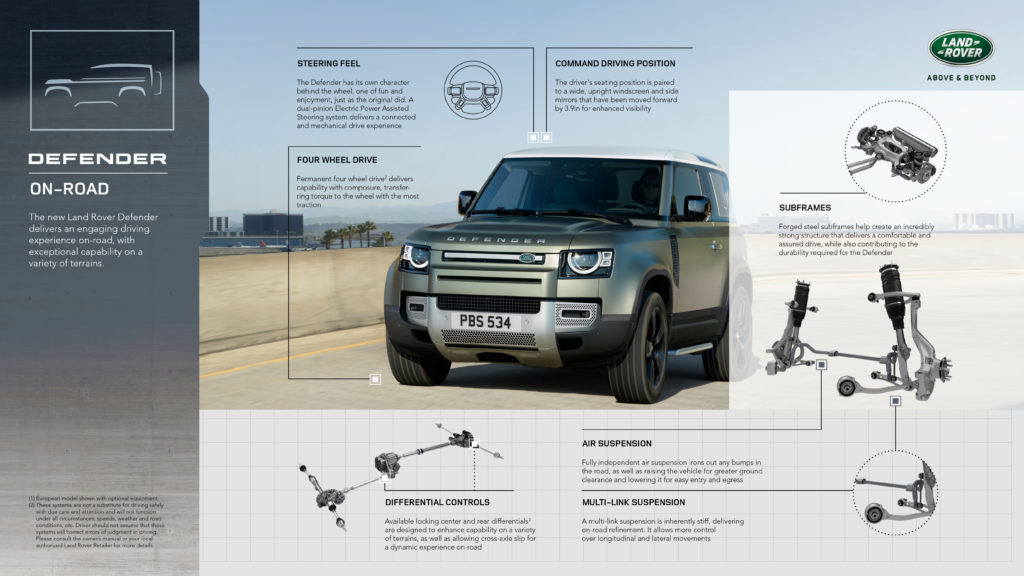 That Terrain Response system includes standard Wade Sensing, which does much more than the view of the water level described above:

The new setting is designed to automatically soften throttle response, set the heating and ventilation to recirculate cabin air, locks the driveline and adjusts the ride height to its off-road setting while activating the Wade Sensing screen on the infotainment system. This allows drivers to observe the depth of water under the vehicle and is designed to provide knowledge when fording deep water – allowing drivers to take full advantage of the new Defender model’s maximum wading depth of 35.4-in (900mm). When exiting a wading environment, the new Defender is programmed to automatically drag the brakes, momentarily, to clean and dry the discs and assist with braking performance when back on dry ground.

The European-version 2020 Land Rover Defender 90 and 110 bodies-in-white are shown. (Provided by Land Rover)

The 90 configuration body-in-white for the European version of the 2020 Land Rover Defender is shown. (Provided by Land Rover)

The 110 configuration body-in-white for the European version of the 2020 Land Rover Defender is shown. (Provided by Land Rover)

The body-in-white for the European version of the 2020 Land Rover Defender is highlighted here. (Provided by Land Rover)