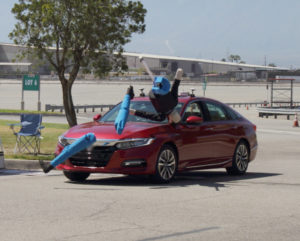 AAA on Thursday reported that pedestrian detection technology on four sedans failed to stop for pedestrians during testing of some common scenarios, including a human crossing in front of the vehicle at night.

“Pedestrian fatalities are on the rise, proving how important the safety impact of these systems could be when further developed,” AAA automotive engineering and industry relations director Greg Brannon said in a statement. “But, our research found that current systems are far from perfect and still require an engaged driver behind the wheel.”

The organization tested a 2019 Chevrolet Malibu, 2019 Honda Accord, 2019 Tesla Model 3 and 2019 Toyota Camry under multiple sets of conditions one could reasonably expect to occur in the real-world.

One batch of tests involved an adult dummy walking perpendicular to the car while the vehicle traveled 20 mph, 25 mph or 30 mph. The 20 mph and 30 mph tests were conducted during the day; the 25 mph simulation occurred at night. AAA said 75 percent of pedestrian fatalities happen at night.

In another test, the car made a right-hand turn around a curve at 15 mph while an “adult” crossed their path.

A third test had two “adults” with their backs to traffic on the roadside while the car approached at 20 mph and 30 mph.

It can be hard for a sensor to detect one human with their back to traffic, according to AAA. This is because “the person’s silhouette is less distinguishable to the system when observed from the front or rear and can also blend into the surroundings” and because it’s harder to detect their gait than if they were moving perpendicularly.

“In conjunction with the challenges presented by one pedestrian walking alongside the roadway, two or more pedestrians walking together are even more challenging because their combined silhouettes become ambiguous in terms of their appearance to the image sensor(s),” AAA wrote in its full report. “This is an important consideration because it is commonplace for pedestrians to walk in close proximity.”

A final battery saw a “child” darting out from between two parallel-parked cars while the test sedan was going 20 mph and 30 mph.

The adult crossing in front of the 20 mph vehicle in the daytime had the best chance of making the journey unscathed, with approximately 40 percent odds of the system avoiding a collision.

“But, at the higher speed of 30 mph, most systems failed to avoid a collision with the simulated pedestrian target,” AAA wrote in its news release.

The systems on the whole did even worse in other crashes.

For any test where the sedan traveled at 30 mph, “In general, the systems were ineffective.”

Find out more at SEMA about diagnostic scanning and calibration in “Overcoming objections to scanning” by Jake Rodenroth of asTech and Mike Anderson of Collision Advice. The Wednesday, Nov. 6, session is part of the Society of Collision Repair Specialists Repairer Driven Education Series running Nov. 4-8. Register here for individual courses or the series pass package deal, which includes the entire week of classes, all three parts of the OEM Summit, IDEAS Collide and the Nov. 7 Sky Villa afterparty.

Not all ADAS could be as successful at reducing crashes as safety advocates and manufactures hope, which mean repairers might not immediately suffer a dramatic a volume drop once the tech penetrates the fleet. One also wonders if the poor results for pedestrians seen here would be echoed in systems designed to detect animals like deer, meaning it might be more challenging for OEMs to prevent through ADAS what can be bread-and-butter crashes for shops in some states.

On the other hand, one could argue that the ADAS here still stopped certain crashes 11, 20 and 40 percent of the time. Losing a fraction of one type of repair here, a fraction of another type there, and so on could stress a repairer’s budget.

It’s also possible that manufacturers seeking to post better results the next time somebody like AAA gets the notion to test their systems will pack a vehicle with more or upgraded technology This could lead to repair complexity — for example, more surfaces carry sensors — or severity (the upgraded equipment costs more to replace).

Finally, even if the technology couldn’t avoid a collision as much as AAA would have liked, it’s notable to doctors, repairers and insurers that it did mitigate the crashes sometimes. This demonstrates that ADAS can reduce severity as well as frequency by producing less serious injuries and less damage to vehicles.

AAA said nearly 6,000 pedestrians die annually, about 16 percent of traffic deaths. The organization also observed that this proportion has “steadily grown since 2010.”

“The rise in pedestrian deaths is a major concern and automakers are on the right path with the intent of these systems,” Brannon said in a statement. “Our goal with this testing is to identify where the gaps exist to help educate consumers and share these findings with manufacturers to work to improve their functionality.”

Featured image: AAA testing of vehicles making a right-hand turn around a curve at 15 mph saw none of them avoiding a crash with a crossing pedestrian. (Provided by AAA)