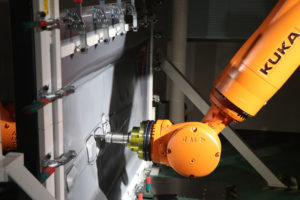 Nissan on Tuesday announced it had discovered a way to build parts out of sheet steel using robots, a technique that could make it easier for collision repairers and mechanics to obtain parts for discontinued cars.

“Thanks to its flexible production, short lead times and minimal upfront costs, the new technique could make it commercially viable to produce and sell a wide variety of after-service and replacement parts in small volumes for cars that Nissan no longer makes,” the OEM wrote in a news release.

Under the status quo, when Nissan ran out of certain parts for a model it no longer sold, customers and repairers might just be out of luck. It costs too much and takes too much time to build a new die to stamp the part, the OEM said.

But after making three critical breakthroughs, Nissan said it might have a new, more realistic path to generating those parts — which could be good news for body shops.

“This technology has significant potential for lowering costs when producing in low volume,” Nick Maxfield of Nissan global communications wrote in an email last week. “We ordinarily wouldn’t be able to offer body panels for cars that we no longer make: there is no business case, since the die costs are prohibitively expensive. The business case (i.e. return on investment) only becomes viable when you start producing in very high volumes, but demand simply isn’t high enough to reach that point. Dieless forming, by contrast, requires one-time up-front investment in the robots (which can produce an infinite variety of parts—within reason!—once you’ve purchased them) and there are some additional costs involved in developing the data required to fabricate the parts. These costs are substantially lower than the cost of designing and building numerous dies for each specific body part if we were using a stamping process.”

The system uses two synchronized robots shaping their respective side of a steel sheet with diamond-coated tools.

This “dual-sided dieless forming” had in the past been viewed too difficult to make work commercially, according to Nissan’s Oct. 1 news release.

“Existing techniques have primarily relied on single-sided forming, which limits the complexity of shapes that can be created,” Nissan wrote. “By placing robots and tools on opposite sides of a steel sheet, they can create more difficult and detailed shapes.”

But it’s hard to get two robots to work in sync and keep quality consistent, according to Nissan.

The OEM said it figured it out using two breakthroughs related to software. It wrote “advanced programs capable of controlling both robots with a high degree of dimensional accuracy, enabling the formation of detailed convex and concave shapes.” It also tapped “the ample expertise and press-forming simulation techniques ordinarily used by Nissan’s production engineering teams” to optimize the robots’ pathfinding logic.

The third breakthrough Nissan made involved using a “mirrored diamond coating” on tools. The OEM said this cut down on friction and meant it didn’t have to lubricate anything.

“This has numerous benefits, including consistency of surface quality and low-cost, environmentally friendly operation,” Nissan wrote.

Maxfield stressed that no announcement regarding specific commercialization had occurred yet.

“That said, we do plan to commercialize the technology, and we have reached the point of being able to meet the high standards required of replacement parts,” he wrote in an email. 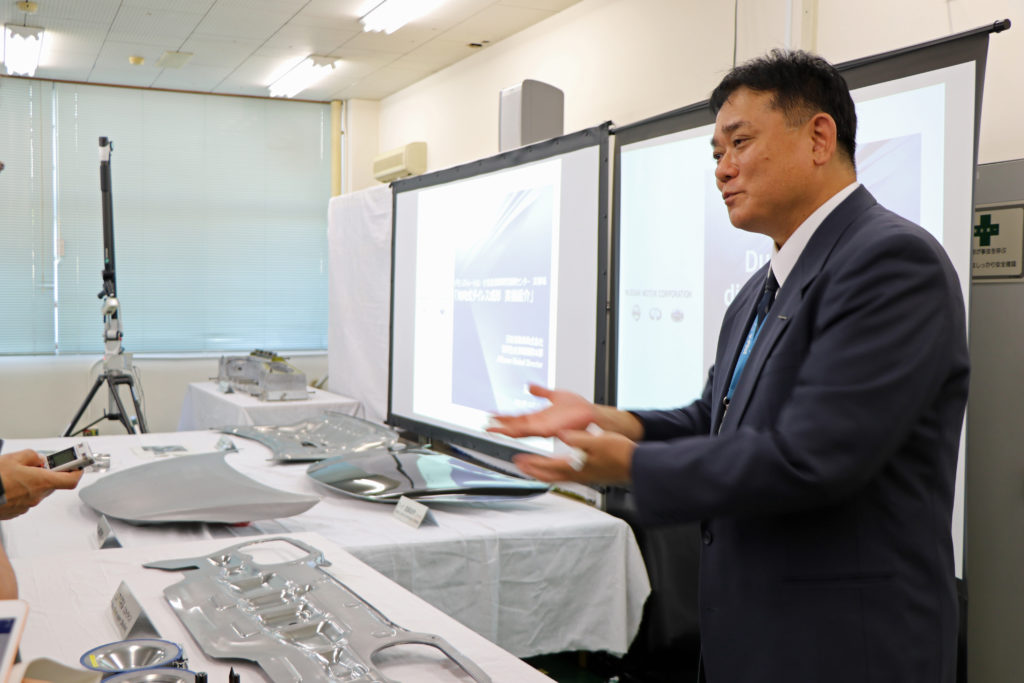 Asked about the size and scope (for example, higher-strength steel structural elements versus mild steel parts) of parts possible, Maxfield said the work to date has surrounded items very much up a repairer’s alley:

– We can make both small and large parts with dual-sided dieless forming. The requirements are basically that the parts can feasibly be shaped from sheet steel, and that we have the data to do so. In addition to the “forming” (i.e. shaping/deformation) process itself, there are additional processes such as flanging and trimming. This means that the dieless forming process itself accommodates a wide variety of part sizes, since they can be cut out of the steel sheet and finished separately, no matter the size.

– In terms of materials, we have mainly been working with standard auto steel for our purposes, but the technology can be applied to resin parts and also other metals such as aluminum. We’d need to adapt and test, of course, which would take time.

– That said, most of the work in the development process so far has gone into body panels and hoods, and that’s where we see a lot of potential for this technology at present—especially since one of the key benefits is the lack of dies (which of course are very costly but essential for the stamping process).

We asked if there was a possibility of using the process to produce replacement parts for vehicles Nissan hadn’t discontinued — having the robots make parts on demand rather than stamping countless parts and having them sit around in a warehouse or dealership on the hope they’re needed.

“In answer to your related question of whether we could produce parts for regular, non-discontinued vehicles: that’s possible, but is still under consideration,” Maxfield said. “For now, the priority (given the low-volume cost benefits of dieless forming) is to produce parts for vehicles we no longer make. That said, the technology itself can be applied to regular vehicles, but the hurdles would be further reducing the fabrication time and also further validating the business case for this application of the technology. It’s also worth noting that the benefit wouldn’t necessarily be apparent if we were making replacement parts for mass-market cars for which we already have the dies. The real benefit would likely be making to-order/custom/unique parts for models we already sell—but again, that’s a bit further out, and for now the focus is on replacement parts for models we no longer make.” 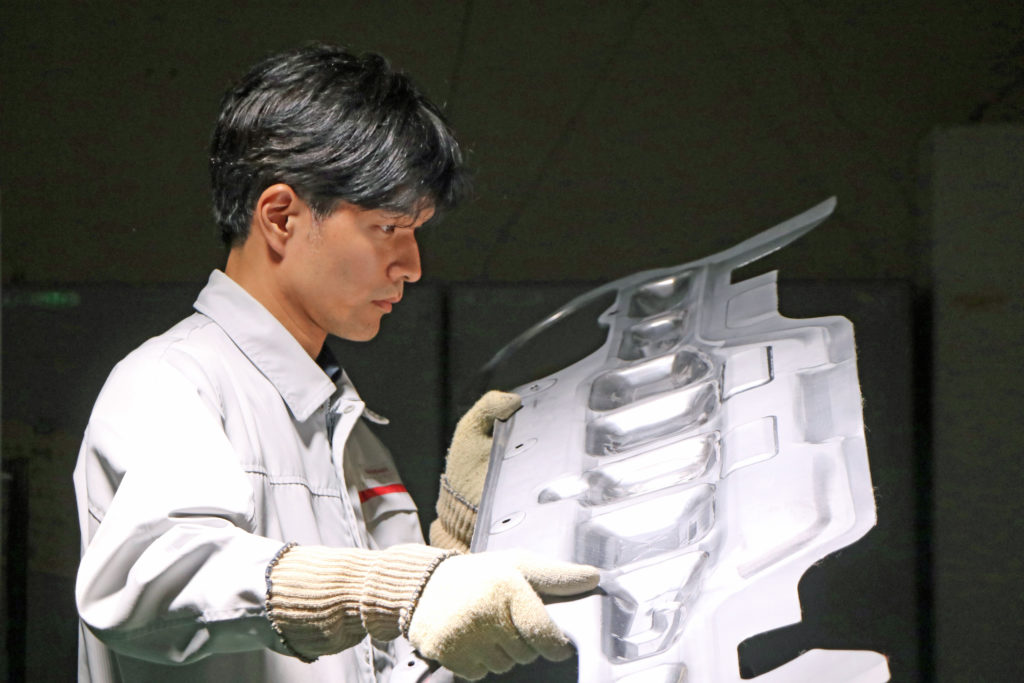 To Maxfield’s point about fabrication time, the Drive reported Wednesday that the dual-sided technique as it stands now is slow.

Don’t expect the monster presses and expensive dies to die just yet, however. A press can form a body panel in mere seconds. How fast are the bots? Fast is the wrong word. The bots started to work on a rear panel of a Nissan Skyline as we entered the room, and when we left an hour later, they hadn’t made much progress. One full panel would take the bots 19 hours, we were told. The press could make 10,000 parts and more in that time.

“Nissan Solves A Pressing Problem: Car Making Without The Presses”

Nissan on Oct. 1, 2019, announced it had discovered a way to build parts out of sheet steel using robots, a technique that could make it easier for collision repairers and mechanics to obtain parts for discontinued cars. The “dual-sided dieless forming” sees two robots shaping a piece of steel in sync instead of using traditional stamping. (Provided by Nissan)

A photo of what appears to be a Nissan press event shows Global Director Takashi Tomiyama next to hoods presumably produced by the “dual-sided dieless forming” technique. (Provided by Nissan)