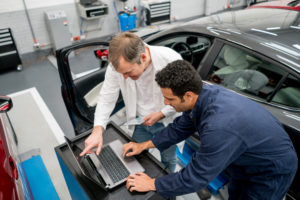 He said his company was involved in a situation where the shop had to buy back a $27,000 vehicle after both failing to follow OEM repair procedures and to complete the work it had billed for. The same insurer whose auto arm paid for the collision repair refused to cover the shop’s errors with its garagekeeper’s arm. (According to Smith, the insurer’s auto segment didn’t pressure the shop to disregard OEM procedures — it actually had rubber-stamped the shop’s estimate.)

Even if garagekeepers’ carriers agreed to accept the repairer’s claim, both the shop and insurer might have a difficult time in court, according to Smith.

Smith will teach repairers processes to avoid such pitfalls at “Completing ‘Thorough and Workmanlike’ repairs,” scheduled for 12:30-2:30 p.m. Tuesday, Nov. 5 during SEMA as part of SCRS’ Repairer Driven Education series.

Using OEM procedures generally protects a shop from such claims, Smith said. But he argued that only a small portion of the industry was accessing and following those instructions, and the biggest issue he saw in the field was inconsistency in understanding them.

Extensive information is available, but most shops didn’t know repair procedures exist, how to access or read them, or how to get paid for them, he said.

Smith estimated only about 25 percent of the industry even knows OEM repair procedures existed, and only about 5 percent were actually following them properly.

Smith said he has heard a repairer argue that if they had to perform a repair procedure outlined by the OEM, the insurer would have told them. “I’m dead serious,” he said.

A repairer might also assume that if an OEM wanted a part seam-sealed or cavity waxed, it would have shipped it like that, according to Smith. This sort of issue is constant, he said.

Smith said the huge push to scan cars in recent years has made “significant inroads,” even if we are seeing “cracks” in the process now. But that’s “farther ahead” than repair procedure usage, he argued.

Every repairer says, “‘We do great work,'” Smith said. But “what are they comparing that to?” he asked.

Smith said he looks at “much less than 1 percent” of the entire industry’s repairs, perhaps 40-50 a month. He pulls repair procedures as a benchmark for a vehicle inspection, and often “the shops are failing to meet” them.

Smith said that about 80-90 percent of the vehicles he inspects have to go back to the shop for something. About 20 percent require “significant re-repairs,” he said.

The “most egregious things” can be found in rural markets, he said, for those shops aren’t as exposed to technology, training or information. He said he felt vendors could pick up the slack here helping to educate these shops.

Smith said ADE also sees a lack of professionalism in how body shops treat vehicles (parts stored in the car, for example) and documenting damage. He argued this too led to bad repairs, for the staff can’t be expected to reach a higher level of professionalism.

“That’s why I use those words,” Smith said, referring to the term “thorough and workmanlike.”

“They need to understand what that means,” he said.

Smith said the term is from the “legal community” and speaks to being able to defend what the shop did in court. Shops have no idea the amount of liability they’re exposed to, according to Smith

When cases go through a settlement with attorneys, “the repair procedures are king,” Smith said.

Shops who are more savvy about repair procedures still have room to grow, Smith said. He said they tend to have problems implementing systems consistently, and repair planning is a major issue.

Smith said he wanted repairers who attended the class to understand following OEM repair procedures was their responsibility, develop processes to execute those procedures, and great opportunities exist to share and explain what they did to other shops in the area.

Smith said auto body shops love to blast insurers, but the problem is the industry’s own ignorance. If an overwhelming percentage of shops weren’t following OEM repair procedures, why would the carrier pay the fraction who are, he argued.

Insurers aren’t going to tell repairers when the shop is wrong, according to Smith. Insurer field staff is “not trained up on this,” and insurers don’t request, collect or review repair procedures during their normal course of work, he said. (Smith said he was involved in an appraisal clause dispute resolution due to an improperly written insurance estimate and asked the insurer if they had access to the repair manual. The answer was “no.”)

The insurer’s not the one with the liability, even if higher-ups are aware of repair procedures, according to Smith. It can argue it wasn’t the repair professional handling the work.

Sign up for Smith’s Nov. 5 class individually for $85, or get access to it everything else that week by purchasing the $400 full series pass. The latter lets you into any every class Nov. 4-6, the OEM Summit and Sky Villa afterparty Nov. 7 and the IDEAS Collide Showcase on Nov. 8. Learn more at www.scrs.com/rde.

Auto Damage Experts national operations director David Smith estimated a small portion of the industry actually were familiar with the idea of OEM repair procedures, and a smaller fraction still were applying them correctly. (andresr/iStock)

Auto Damage Experts national operations director David Smith said ADE sees a lack of professionalism in how body shops treat vehicles (parts stored in the car, for example) and document damage. He argued this too led to bad repairs, for the staff can’t be expected to take what it’s doing seriously. (patrickheagney/iStock)