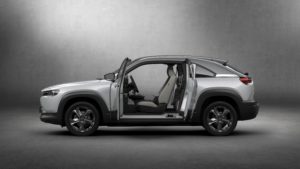 Mazda on Tuesday unveiled the electric Mazda MX-30, describing a body and suicide-door structure good enough to protect occupants without a B-pillar.

The OEM says the vehicle has been engineered to deliver “body strength and energy-absorbing efficiency on par with cars that have center pillars.”

Mazda’s incorporation of an all-electric powertrain already probably moved the vehicle’s body-in-white a bit out of a collision repairer’s comfort zone. Shaking up the design even further with a safety cage built around suicide doors will make accessing OEM procedures even more critical than it already is.

“(A)iming to combine high-level collision safety with the Freestyle door system, hot-stamped vertical reinforcements are positioned inside the rear doors,” Mazda wrote in a news release Tuesday. (Emphasis ours.) “The result is a structure that firmly receives impact energy from side collisions and effectively diffuses it out toward the body opening. Reinforcing of the front and rear hinges, as well as the side sills, has realized body strength and energy-absorbing efficiency on par with cars that have center pillars.”

(One caveat: The news release referenced the European model, so it’s possible not everything we describe throughout this article will apply to the U.S. edition. But OEMs like global platforms, and the features described here would seem desirable to U.S. consumers too.)

Mazda said it also used a bunch of ultra-high-strength steel in the body.

“To protect cabin occupants in the event a collision occurs, the MX-30’s center-pillar-less design incorporates a process by which hot-stamped material is first attached to the multifaceted reinforcing material before both are formed together into the A-pillar and roof side shapes,” Mazda wrote. “Extensive use of 1,310 MPa-class and other ultra-high-tensile steel combines with efficient energy-absorbing structures throughout.”

“I’ve confirmed MX-30 doesn’t include aluminum or other advanced materials for lightweighting,” she wrote in an email Friday. 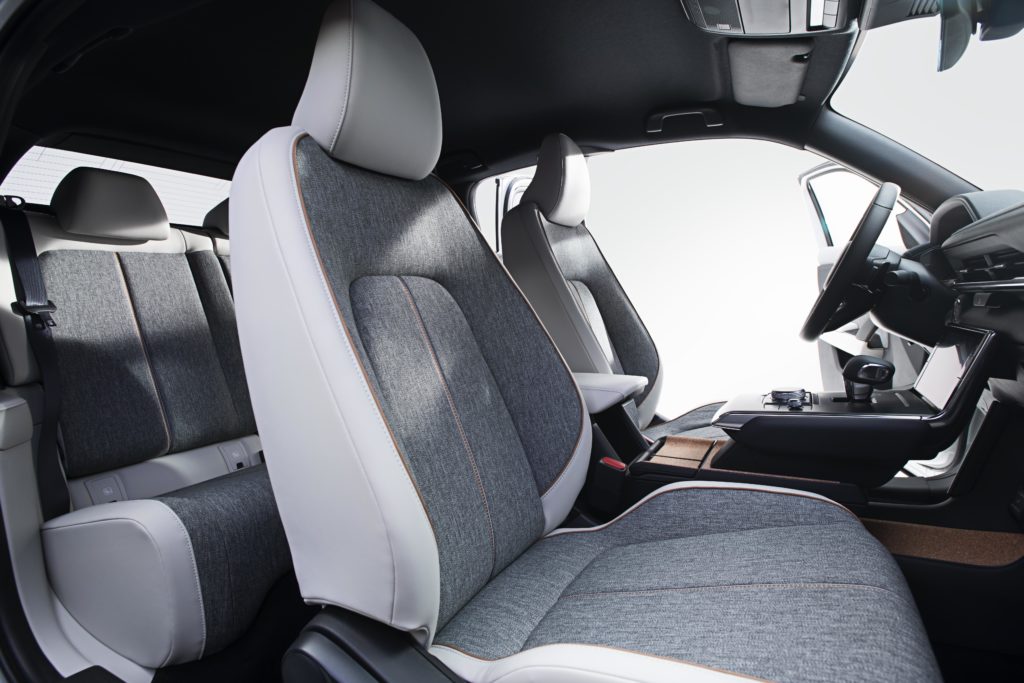 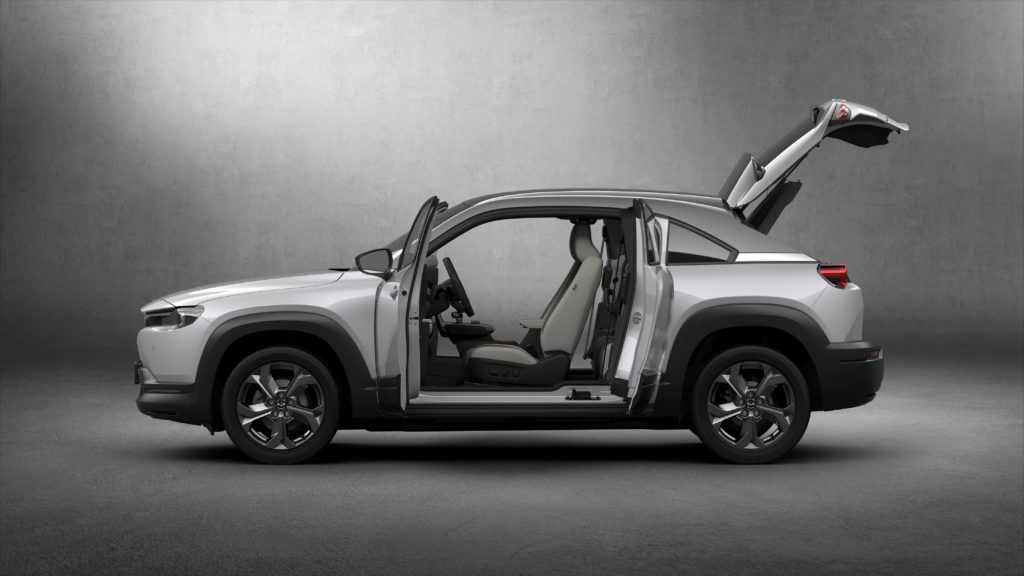 Mazda calls the doors “freestyle doors,” with the front pair able to open 82 degrees and the rear doors 80 degrees due to “custom-designed hinges.” The rear door trim has a grip to make it easier to open and close, and a device can with a touch fold a front seatback forward and slide the seat to the front automatically so it’s easier to get into the back.

Mazda said “the battery packs are covered with high-strength material and surrounded by a rigid frame” to help out in case of collisions. (The car also knows to cut the power to the battery once it detects a collision.)

It called the structure around the battery “carefully designed” and “joined to the body to effectively help overall rigidity.” However, the battery-body connection also should deliver a more peaceful ride, Mazda says — which means customers might notice that it “feels different” if you don’t restore the structure properly. According to Mazda:

(T)he MX-30 takes Mazda’s original body concept, which is based on straight framework bolstered by continuous ring structures, and enhances it by increasing its rigidity and energy transmission efficiency. The vertical, lateral and longitudinal connections of the body’s multi-directional ring structures increase rigidity while reducing lag in energy transmission and maximizing the function of the dampers and tires. By concentrating energy input from the road surface in specific locations and using the damping structure that serves as a buffer material to absorb it, the body effectively reduces vibration that would otherwise cause noise and does so without increasing vehicle weight. Incorporating the battery pack as a part of the body’s ring structure enhances the multi-directional ring structures of its basic design by greatly increasing diagonal rigidity. Specifically, the frame that surrounds the battery pack is connected to the body in 20 locations. Straight crossmembers sandwiching the battery pack from above and below combine with a reinforced ring structure for the rear axle mounts significantly reduces the delay in the transmission of inputs. Careful control over the rigidity of the battery pack mounts lets the MX-30 use the battery to help suppress road noise.

Find out more at SEMA about vehicle technology and trends with “From substrate to surface – preparing for emerging trends in automotive technology” featuring Mircea Gradu of Velodyne, Matt Murphy of Materials Science Corporation,  Christian Ruecker of DEKRA Services and John Waraniak of SEMA; “Mobility: The Future of Automotive Protection and Beautification” with Jennifer Boros, Gareth Hughes and Ranju Arya of PPG; “Auto industry disruption: Win despite change!” with Frank Terlep of asTech. The sessions are part of the Society of Collision Repair Specialists Repairer Driven Education Series running Nov. 4-8. Register here for individual courses or OEM Collision Repair Technology Summit sessions or get the series pass package deal., which includes every class Nov. 4-6, the OEM Summit and Sky Villa afterparty Nov. 7 and IDEAS Collide Showcase on Nov. 8.

Other body design features of note include:

Body lines: “The surfaces that appear flat along the body sides are in fact formed with a bold curve in them that continues from the front end to the shoulder highlights,” Mazda wrote.

Three-tone top: The paint job on the MX-30 can be quite elaborate. The OEM on Tuesday described using a metallic paint for the “side sections of the cab between the A-pillars and D-pillars, as well as the side of the rear liftgate,” while “(t)he roof is blacked out in order to highlight the metallic portions.”

Mazda will make this paint job available if customers get the Soul Red Crystal, Polymetal Gray or Ceramic Metallic colors.

Other technology with potential ramifications to collision repair includes:

Cooling: The method of cooling the battery might have implications for body work, depending on how much of what Mazda described is external to the battery pack rather than contained within it.

“The MX-30 adopts a refrigerant cooling system that cools the battery pack when the temperature rises,” Mazda wrote. “… Thin cooling tubes attached to the bottom plane of the battery module make contact with a heat exchanger. This structure contributes to realizing a compact battery pack. A sensor constantly monitors the battery’s temperature and controls the flow of coolant as needed. The result is an effective battery cooling system. Cooperative control between the air-conditioning and battery cooling systems achieves effective cooling performance for both systems.”

“e-GVC Plus”: The MX-30 is able to optimize the vehicle’s movement in relation to the steering. This sounds like a system which could need some sort of steering angle sensor reset as part of a repair or following an alignment. 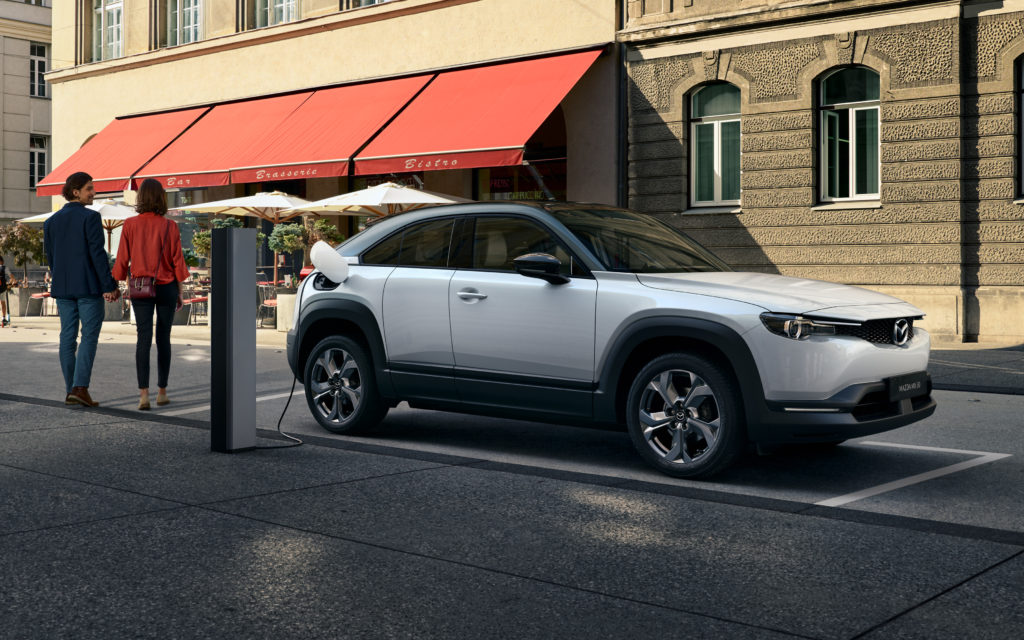 In addition to i-ACTIVSENSE ADAS suite technology (it’s unclear how much is standard and/or available), the MX-30 also has the potential to autobrake while turning left to avoid being T-boned.

“SBS adds a new Turn-Across Traffic function to the vehicle, pedestrian, nighttime pedestrian and bicycle monitoring functions already built into the system,” Mazda wrote. “When turning left at an intersection, (on left-hand drive units), the forward-sensing camera and milliwave radar sensors monitor oncoming traffic. When the system determines there to be a chance of a collision occurring, it automatically applies the brakes to help prevent impact or mitigate damage that may occur.”

It only works at low speeds, but then again, you probably would have been stopped to make the left anyway.

The vehicle also can use a forward-facing camera for a Road Keep Assist able to deduce the road’s perimeter by watching for items like grass and curbs. It doesn’t need to cue off of a lane line to tell when you’re leaving the road and need to be autosteered back. That technology starts working once the vehicle gets slightly over 37 mph.

Finally, the system’s Blind Spot Assist will autosteer the car to prevent you from changing lanes right into the path of a vehicle in your blind spot. The system relies on 24-gigahertz milliwave radar sensors and becomes active slightly above 37 mph.

Mazda said the MX-30 electric car had a body and suicide-door structure good enough to protect occupants without a B-pillar. The European version is shown here. (Provided by Mazda)

“The surfaces that appear flat along the body sides are in fact formed with a bold curve in them that continues from the front end to the shoulder highlights,” Mazda wrote of its MX-30. The European version is shown here. (Provided by Mazda)

The paint job on the Mazda MX-30 can be quite elaborate. The OEM described using a metallic paint for the “side sections of the cab between the A-pillars and D-pillars, as well as the side of the rear liftgate,” while “(t)he roof is blacked out in order to highlight the metallic portions.” It’s basically a three-tone paint job. The European version is shown here.(Provided by Mazda)