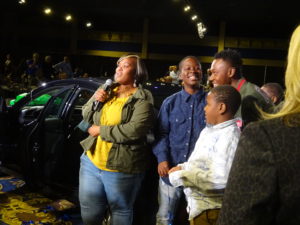 “That awareness has grown exponentially in the last 18 months,” Garoutte said.

The high-profile program has made a difference in the collision industry’s communities, Garoutte said.

It also might provide a nice PR moment for participating shops and the industry as a whole, we’d wager.

Collision repairers interested in Recycled Rides for one or both of these reasons might be curious to know how the 13-year-old program works.

Garoutte shared the nuts and bolts of it with us in an interview Dec. 31 — the eve of the NABC’s 25th year and two weeks before the organization’s second “NABC Day” in Palm Springs, Calif.

From signup to gifting

Auto body shops seeking to restore and give a Recycled Rides car typically reach out to NABC through its website, according to Garoutte. He said many repairers actually opt to give multiple vehicles.

A program manager will review the application and check whether the shop is a NABC member, he said.

NABC membership, which starts at $500 for a single-shop collision repairer, is required to participate in Recycled Rides. But there’s no additional charge on top of that for the Recycled Rides program itself. (Though shops have the option to jazz up the presentation of the car with a big green trademark Recycled Rides bow and a “branding banner” for $159.) Your facility just needs to donate its time, expertise and space.

NABC also contacts the repairer to learn information like what the shop hopes to accomplish and when. Typically, a Recycled Rides scenario runs about 90 days between the time repairers “raise their hand” to the gifting itself, he said.

The organization will walk the shop through the process, which will see NABC handle much of the logistical heavy lifting if the repairer wishes. You just need to fix the car right. 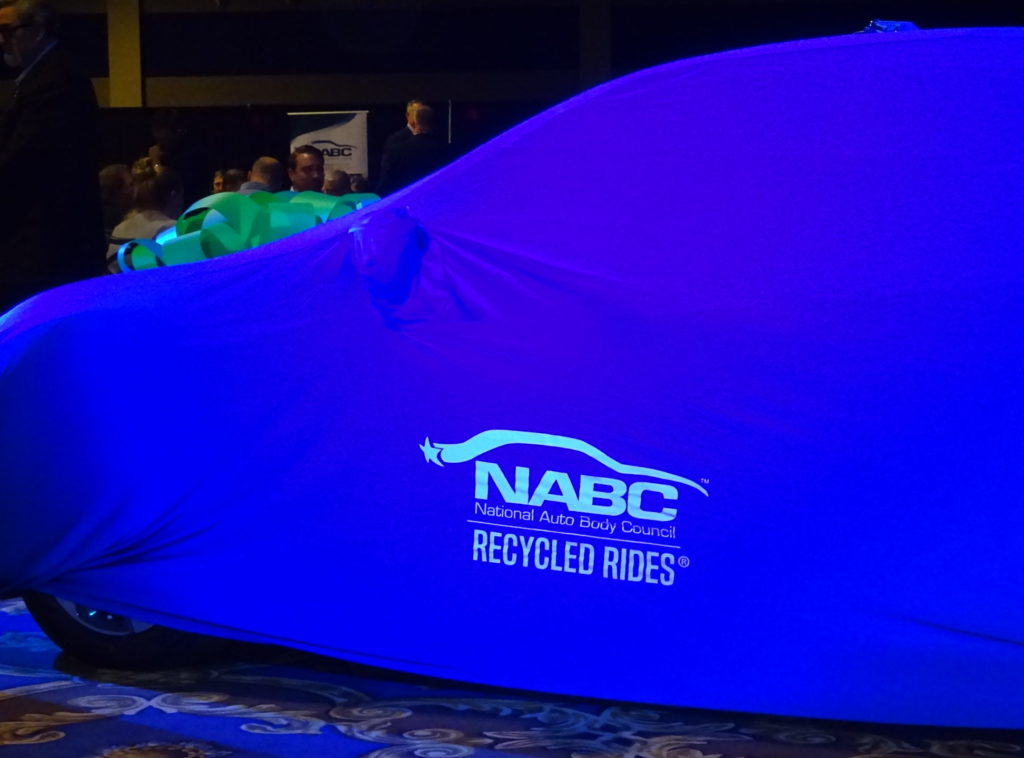 “We facilitate the vehicle,” Garoutte said. NABC will search for a vehicle, targeting those five years old or newer — the “sweet spot” tends to be about 60,000 miles, he said.

Virtually all of the Top 10 insurers are NABC partners who can supply vehicles, as are many regional carriers, Garoutte said.  He said part of the “background check” — the initial consultation with the shop — involves finding if the repairer has a preference for teaming up with a particular carrier, perhaps one with whom it does a lot of business.

Armed with the “shopping list,” NABC will line up a vehicle for the repairer’s approval, Garoutte said. Considering that the repairer will donate time, parts and materials, NABC doesn’t want the facility “hung out to dry” on the vehicle, he said.

In fact, it’s “not uncommon” for NABC to run 3-4 vehicles past the shop before the facility finds one it would like to restore, according to Garoutte.

Most vehicles are salvage titles, with back stories ranging from theft recovery to crashes. NABC prefers theft recovery cars, as they typically require less work.

Garoutte said NABC also has an exclusive deal with 1-800-Charity Cars to handle the “minefield” of titling the vehicles. In most states, the vehicles post-repair hold a salvage title and must be reinspected, he said.

Once the shop settles on a vehicle, NABC shifts to lining up a recipient. Again, it seeks to defer to a repairer’s preferences.

“It’s their marketing program,” Garoutte said. NABC will ask if the repairer would like to work with a particular charity in the community and why. If the repairer doesn’t have one in mind, NABC has relationships with a variety of regional and national organizations, according to Garoutte. He said NABC might be able to match a shop with an affinity for a particular kind of charity — for example, one with a military bent.

NABC will ask the charity to suggest a recipient meeting certain criteria. For example, the person must have housing — NABC doesn’t want the recipient living in the car — and proof of auto insurance, Garroutte said. He said it varies whether insurers kick in a policy along with the vehicle.

A shop can also request a specific individual receive the vehicle — for example, someone they’ve read about that’s suffered hardship. Farmers Insurance once orchestrated a gifting to a police offer who’d lost everything in the Camp Fire striking the Paradise, Calif., area, Garoutte said.

The intended recipient merely has to meet NABC’s criteria, he said; the organization doesn’t want a situation which isn’t “healthy” for the parties involved. 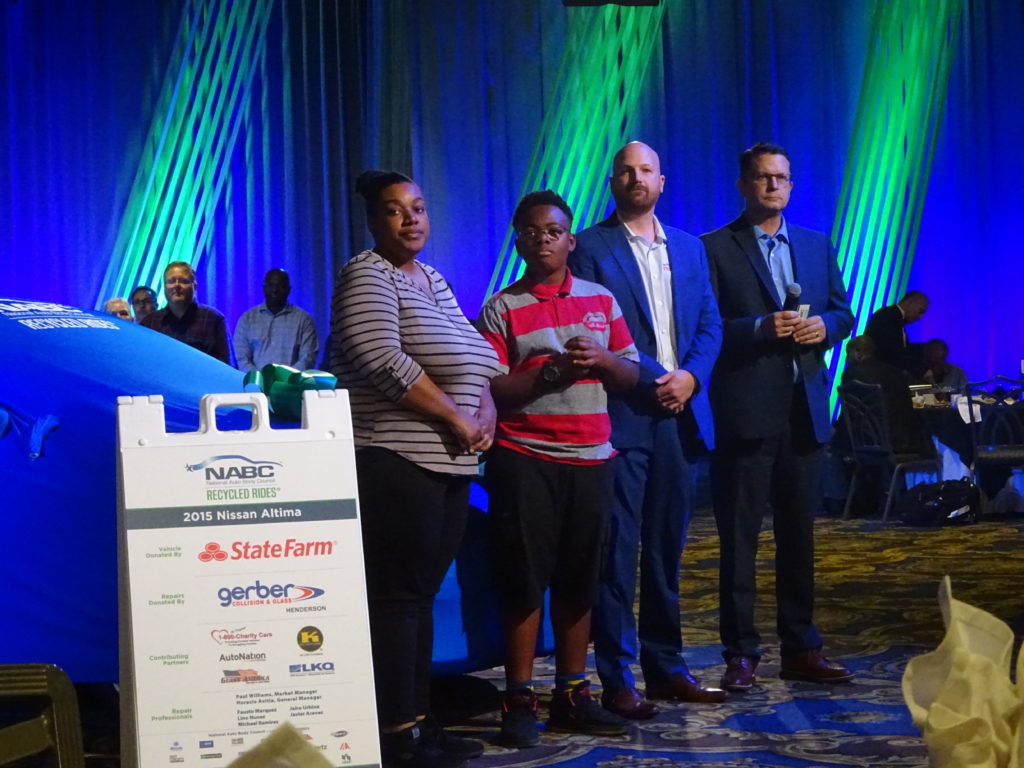 NABC offers guidance on the gifting event too — including marketing help — but defers to the shop’s wishes. It wants the event to be the repairer’s, not NABC’s. “They’re the headline,” Garoutte said.

Only about 20 percent of Recycled Rides events are directly controlled and choreographed by NABC, Garoutte said.

For example, the organization at SEMA 2019 organized an elaborate luncheon event that included the presentation of vehicles to multiple families.

Some of those recipients’ stories demonstrate just how life-changing a collision repairer’s gift of their expertise can truly be. For example, according to NABC: 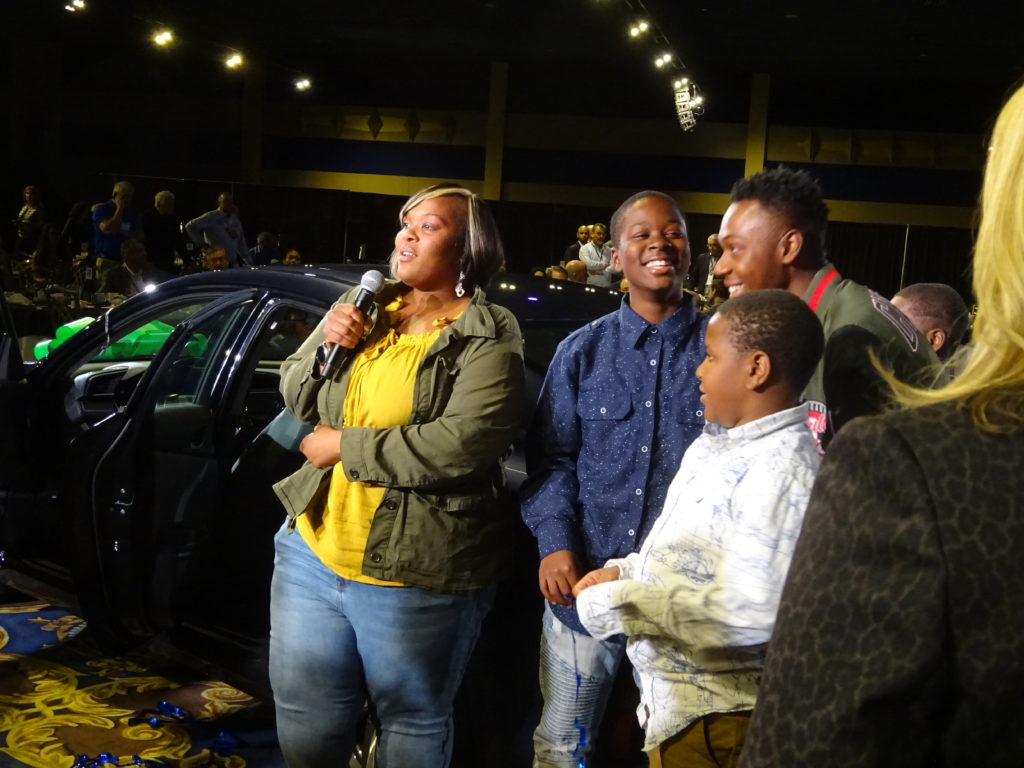 Some Recycled Rides restorations involve after-hours work by technicians, but sometimes it’s easiest for a shop to schedule the vehicle into production like any other repair, Garoutte said.  It permits the repairer to get it in and out of their system, he said.

Asked if NABC participation tended to skew toward a particular pay style — for example, hourly versus piece-rate — Garoutte said “we don’t even ask.”

Garoutte described the process as rewarding for technicians who participate.

Tech are present for about 99 percent of Recycled Rides giftings events, and “it’s always a point” to introduce the techs and produce a connection between the recipient and repairer, Garoutte said. It puts a face with the metal, he said.

“There is a connection there,” he said.

NABC doesn’t require a repairer to be certified by the donation vehicle’s OEM, Garoutte said. It assumes participants are quality shops, and “we’ve never had any issues,” he said.

NABC encourages shops to repair a vehicle to OEM standards, though it’s “not a mandate.” Garoutte said. It even can help a repairer do so on at least one front: Garoutte described a partnership with asTech to provide free scanning and calibration. However, NABC often finds the repairer “doing that anyway.”

The organization doesn’t check the repairer’s work on the vehicle, Garoutte said.

However, in NABC’s experience, shops and technicians take a “great deal of pride” in the work and are trying to show the collision industry giving back in its area of expertise, according to Garoutte. 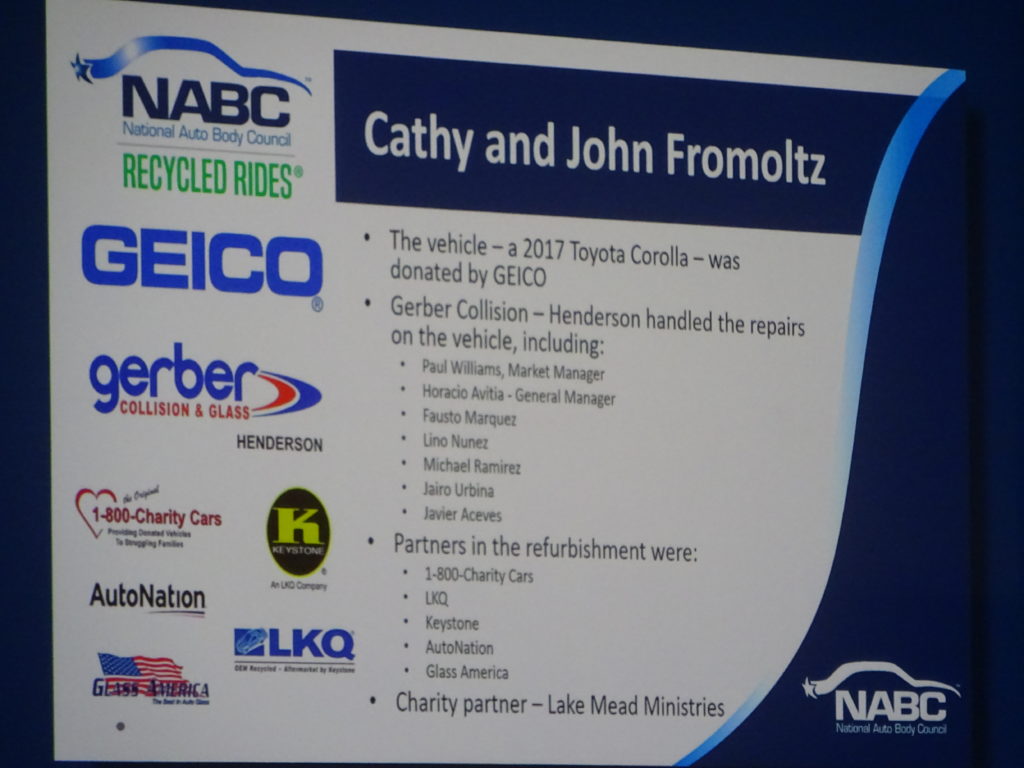 Garoutte said there’s “literally” not been a vehicle you wouldn’t want to drive home.

In addition, “virtually every state” reinspects salvage vehicle for safety, he said.

If a shop isn’t able to secure donations of items like parts and material from its own local connections, Garoutte said NABC can also help shops line such items for the repair from its partners, which include dealerships, paint companies and alternative parts suppliers. He said NABC’s partners always rise to the occasion, citing an example of an instance where a transmission failed on a gifted vehicle. LKQ provided a transmission, and the shop handled the installation. “Everybody donates everything,” he said.

Repairers need to be a NABC member to participate in the official Recycled Rides program, but there’s nothing stopping a repairer from fixing up a car and donating it on their own.

You won’t have the significant logistical, titling and marketing support NABC provides, and you can’t call the event “Recycled Rides” — the brand is a registered trademark. (So is the big green bow.) But it’s certainly possible.

For example, Honolulu, Hawaii-based UNIBODY Autotech Collision Center last month announced it worked with First Insurance Company of Hawaii to restore and give a 2013 Nissan Altima to Jessica Feliciano, a single mother of a 13-year-old girl.

“(T)he mother who received the donated car was taking 4 buses a day, often late at night, to get to and from work because she couldn’t afford a car,” UNIBODY Hawaii spokeswoman Emily Latimer wrote in an email. “She and her family were in tears talking about how the car will make it both safer and easier for her to get to/from work, pick up her daughter, buy groceries, and allow her to not have to depend on her family. It was not only a gifted car, but also the gift of valuable time and safety. It was truly a moving event.”

New City Nissan, NAPA Hawaii, and PPG contributed parts and supplies, and FICOH provided the car. It was FICOH’s fourth year of teaming up to donate a vehicle. 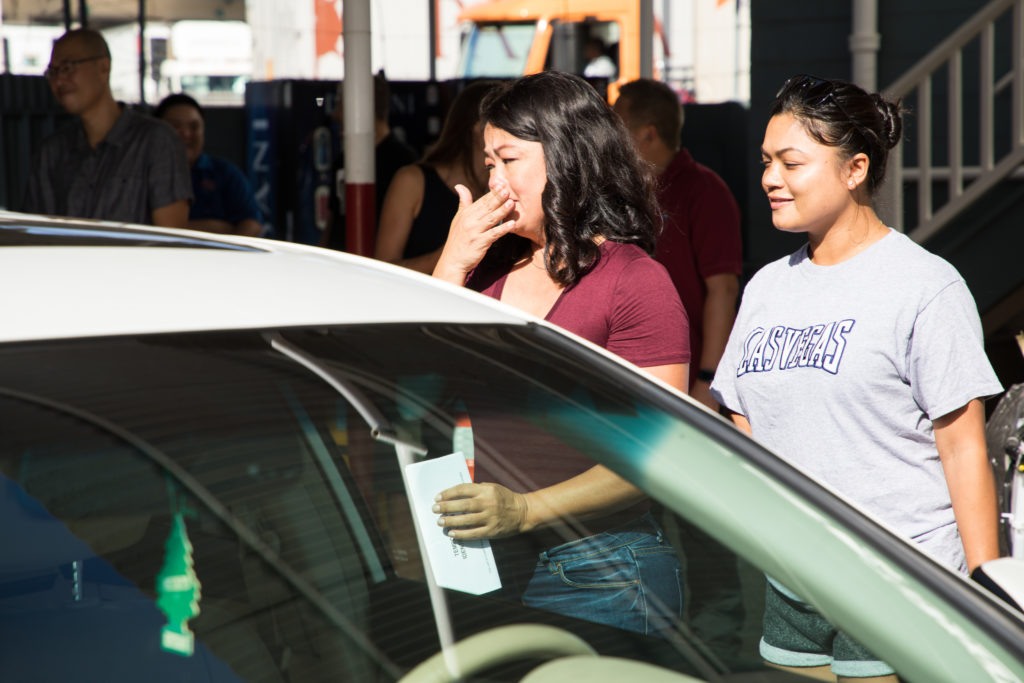 A Recycled Rides vehicle prior to being unveiled at a Nov. 6, 2019, National Auto Body Council event. (John Huetter/Repairer Driven News)

Jessica Feliciano, a single mother of a 13-year-old girl, reacts to the donation of a 2013 Nissan Altima by First Insurance Company of Hawaii and UNIBODY Autotech Collision. (Travis Okimoto/Provided by UNIBODY Autotech)