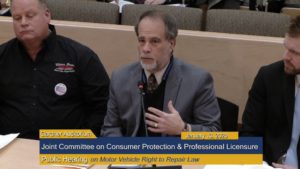 The Massachusetts Joint Committee on Consumer Protection and Professional Licensure on Jan. 13 was examining House Bill 4122, the main legislative measure expanding right to repair access to telematics data, and House Bill 4302, the result of a ballot initiative. Both are essentially identical.

“Commencing in model year 2022 and thereafter a manufacturer of motor vehicles sold in the Commonwealth, including heavy duty vehicles having a gross vehicle weight rating of more than 14,000 pounds, that utilizes a telematics system shall be required to equip such vehicles with an inter-operable, standardized and open access platform across all of the manufacturer’s makes and models,” the ballot language would state. “Such platform shall be capable of securely communicating all mechanical data emanating directly from the motor vehicle via direct data connection to the platform. Such platform shall be directly accessible by the owner of the vehicle through a mobile-based application and, upon the authorization of the vehicle owner, all mechanical data shall be directly accessible by an independent repair facility or a class 1 dealer licensed pursuant to section 58 of chapter 140 limited to the time to complete the repair or for a period of time agreed to by the vehicle owner for the purposes of maintaining, diagnosing and repairing the motor vehicle. Access shall include the ability to send commands to in-vehicle components if needed for purposes of maintenance, diagnostics and repair.”

In collision repair, shops handle “traumatized” vehicles, and they need information to fix and disassemble such models, Papageorg said.

Otherwise, removing a door might trigger an airbag and put an employee at risk, according to Papageorg. Electrified vehicles demanded “set procedures” so that “electrocution doesn’t take place,” he said.

Body shops also face “tremendous pressure” on cycle time, Papageorg said. “If we had that information readily available to us, we can cut down on that cycle time,” he said. Otherwise, the repairer must send the vehicle elsewhere to complete the work.

While shops had the correct tools, “it’s the information” which was needed, and “it changes daily,” according to Papageorg. Repair procedures might have been updated in the time since the body shop sent the vehicle to a dealership, he said.

The Alliance of Automotive Service Providers of Massachusetts supported a customer being able to give vehicle information to a repairer, he said.

Mobile Auto Solutions President Kevin DiVito said it was important for independent repair shops to get the necessary data, and many leading businesses were based upon such information being available.

DiVito said his company has been able to service the current model year with identical equipment to dealerships, but “one growing OE gap” involves Tesla.

He said the electric car manufacturer didn’t offer the aftermarket a means of scanning and programming their vehicles, leading groups to seek “workarounds.” Given their semi-autonomous nature, this repairer inability posed a “safety risk,” according to DiVito.

Tesla has not yet responded to a request for comment.

Alliance For Automotive Innovation senior director of state government affairs Wayne Weikel said his OEM-representing organization “strongly” opposed the ballot question, which he called “disingenuously” represented as closing a loophole. He said repairers had been misled about the legislation.

“There is no loophole,” he said. Massachusetts law specifically addressed the data required for a repair, he said, citing Chapter 93K Section 2(f):

(f) With the exception of telematics diagnostic and repair information that is provided to dealers, necessary to diagnose and repair a customer’s vehicle and not otherwise available to an independent repair facility via the tools specified in paragraph (1) of subsection (c) and paragraph (1) of subsection (d), nothing in this chapter shall apply to telematics services or any other remote or information service, diagnostic or otherwise, delivered to or derived from a motor vehicle by mobile communications; provided, however, that nothing in this chapter shall be construed to abrogate a telematics services contract or other contract that exists between a manufacturer or service provider, an owner or a dealer. For the purposes of this chapter, telematics services shall include, but not be limited to, automatic airbag deployment and crash notification, remote diagnostics, navigation, stolen vehicle location, remote door unlock, transmitting emergency and vehicle location information to public safety answering points and any other service integrating vehicle location technology and wireless communications. Nothing in this chapter shall require a manufacturer or a dealer to disclose to any person the identity of existing customers or customer lists.

“The right to repair law works,” he said.

If a tire pressure monitor registered a low-pressure reading, he wouldn’t want six solicitations from a tire company. “I don’t need that” as a consumer, he argued. 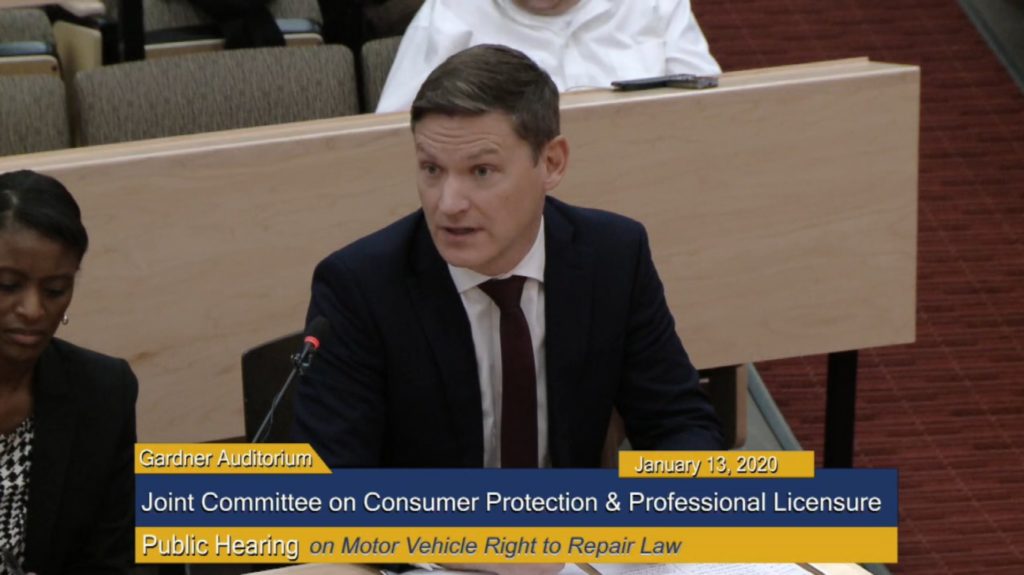 Weikel argued that proponents of the law are really trying to seek information like GPS data, and “simply no reason” existed why a repairer would need it. He said the measure raised privacy risks.

Shops had the information they needed, and this wouldn’t change, Weikel said. “Passing this won’t change that,” he said.

Weikel acknowledged far fewer vehicles with telematics were in place for the 2012 Right to Repair law, and the industry was moving to a point where virtually all vehicles would be connected.

Asked if his organization would be in favor if a means existed of segregating maintenance from personal data, Weikel said that would be up to his group’s members, but the ballot question didn’t permit a change in its language.

Asked for examples of what data would be made available, he said, “there are a lot.” It could include driving patterns, biometric data, and the details about braking and acceleration insurers would like to access, he said.

Weikel said the “vast majority of data” generated is immediately forgotten by the vehicle, such as details from a parking sensor which are wiped after the vehicle is parked.

Other information transmitted off the vehicle is typically rendered anonymous, such as warnings of traffic issues ahead determined from telematics or using multiple motorists’ wheel data to predict a pothole, he said.

More personal information such as directions, emergency response or vehicle health data “has a monetary value,” he said. Consumers subscribe to it and receive that information and value, he said.

An OEM who didn’t comply with this would be in violation — and repairers don’t seem to be reporting such information being withheld, Weikel said.

NASTF in the past three years has received just five requests from Massachusetts repairers, and three of these simply were resolved by pointing the shop to the right location for that information.

“The information’s out there,” he said.

DiVito said when information is unavailable, he can contact the automaker. OEMs are typically responsive, and the issue tends to be resolved in a “reasonable amount of time” and for the benefit of dealers and independents, he said.

If that didn’t work, he said his company has worked with NASTF, the “first line of recourse” under Massachusetts’ R2R law. If that failed, the business could escalate to a consumer complaint per the law, he said.

If the data generated off of a consumer’s car was his or her own, “Why can’t I have that?” Rep. William O’Driscoll, D-Milton, asked Weikel. Why couldn’t the consumer do what they pleased with it?

Automakers permit access to information through an app or emails, Weikel said. But the volume of data being generated in real-time isn’t something which can be shared on a thumb drive, he said, citing a bill proponent’s assessment of 25 GB per hour.

O’Driscoll said that given the “entrepreneurial spirit” of the tech world, he was skeptical of the argument that nobody would be able to digest the info in a manner useful to a consumer.

Tommy Hickey, director of the Right to Repair Coalition, said the organization asked 100 consumers to write to automakers requesting their own data. “Not one received a response back,” he said, a statistic that O’Driscoll raised as well.

There was “still no platform” for an owner or independent repairer to obtain that information.

“Why is your car information such a secret?” Hickey asked. It had nothing to do with personal information, he said. “This is about mechanical information” to diagnose and repair a vehicle, he said. 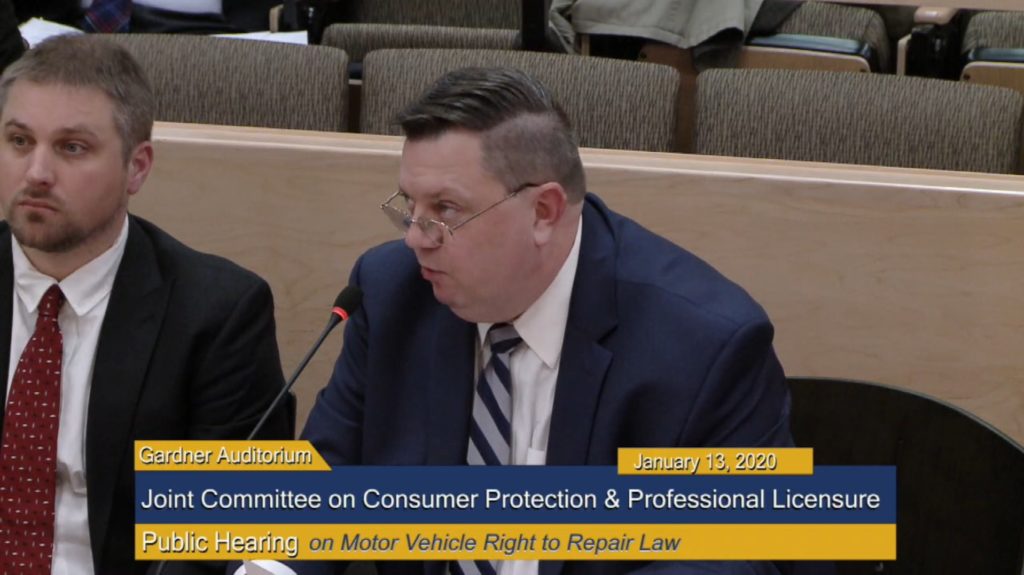 Other repairers supported the spirit of the legislation but reported concerns.

It was important to “cautiously prepare for tomorrow,” he also said.

However, he noted that the organization feared “a 50-state data access regulatory structure” and the expense “incurred because of the potential 50 distinct regulations required the compliance.”

New England Service Station and Auto Repair Association Vice President Matt Lamontagne (Leo & Sons Auto Repair) said his organization supported anything that protected an independent shop’s right to fix a vehicle. The legislation up Jan. 13 did so “in spirit,” he said.

However, “we are concerned” that the legislation’s demand for a secure vehicle interface and mobile solution might be more difficult to create than it may seem.

A Massachusetts-only approach might also produce a “lengthy legal battle” that delayed an industry solution, he said.