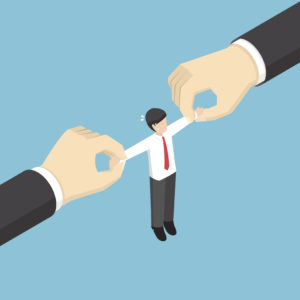 An “absolute battle and positioning” between OEMs and insurers is underway today, but carriers who accept automakers having a role in a loss will be in a better position, consultant and former USAA Assistant Vice President Jimmy Spears said this fall.

A lack of collaboration between the two sectors would ultimately harm the customer experience, Allstate director Clint Marlow agreed in another webinar late last year.

Moderator George Avery asked Spears on an October 2019 VeriFacts Guild 21 call about what he called Spears’ term of the “battle for first notice of loss.”

Spears (Spears Consulting Group) said “a lot of posturing” existed today. But he said he felt OEMs would “own the first notice of loss.”

Telematics and vehicle connectivity permit an OEM to discover a crash, contact the consumer and recommend a repairer. Spears predicted they would do so, then contact the carrier and report their insured vehicle had been in a crash and was now at a particular body shop. It would offer to perform a well-blueprinted appraisal with teardown — not some “rudimentary digital evaluation” — or the insurer could send someone, he said.

The customer won’t know the “absolute difference,” and might get a different degree of care on their vehicle, Spears said. It would be like how someone insured under a health policy just goes to the doctor rather than contacting the insurance first, he said.

“They may get used to that,” he said, in what seemed to be a reference to consumers.

While a battle for first notice of loss existed, carriers who embraced the process and worked with body shops, OEMs and others “closest to the customer” at that FNOL would produce a better experience, Spears said.

Marlow told an Insurance Nexus webinar on Dec. 6, 2019, that if insurers collaborate and partner with OEMs, it could create a “delightful” experience for the consumer. The automaker, repairer and insurer could be “on the same page” regarding how the vehicle should reach a repair facility, what parts should be used and when to expect the delivery, he said.

Otherwise, conflicting messaging from the insurer, automaker and repairer could leave the customer feeling confused, according to Marlow.

“They probably don’t know who to trust,” he said on the webinar, held four months before Insurance Nexus’ Auto Insurance USA conference.

Asked if insurers and OEMs would partner to share the customer effectively, Marlow said, “I believe that will happen.”

Insurers and automakers are having more conversations about what collaborations entail, he said.

Both were pursuing a “delightful customer experience,” he said.

The automakers weren’t going anywhere, Marlow said, and failure to work together wouldn’t provide that experience.

Marlow’s fellow panelist Pete Frey, Nationwide commercial telematics and connected business director, agreed that insurers and automakers competing for a customer would be at the “expense of that customer.”

Though historically this had been more competitive, “that mindset is changing,” he said.

Asked about customer choice, Spears noted that OEMs are beginning to accommodate customer choice with tows farther than an insurance carrier might provide. For example, if the closest certified shop isn’t in the insurer’s allotted 25-mile radius, the OEM will haul the car to the facility.

What about DRPs? Spears suggested that a “wise carrier” with a DRP might rethink how they handle a network. Currently, many variables like location and proximity arise when building a network. By basing membership automatically on the OEM’s certified network, “it may make things a lot simpler for a carrier,” he said.

The customer the OEM contacts will automatically be going to one of your network shops.

“It’s really a great move, if you think about it,” he said.

Automatically adopting certified shops as DRP facilities meant a carrier could channel its effort into the back end — speed, service and accuracy — rather than the front end, he said.

Embracing OEM certified networks might remove a carrier’s ability to manage costs with options like non-OEM parts or labor rates. Would the improved efficiencies mean the insurer still comes out ahead?

Spears said network shops focusing on facility, training and tooling will perform better than shops that don’t, and from a consumer’s point of view, it’s a “much better way.” A “smart carrier” would embrace those components and find efficiency on the “expense side of the house.”

At the end of the day, it was irrelevant whether savings came from the indemnity or expense side of the business, Spears noted: the combined ratio came out the same. Using “speed, accuracy and service” to be more efficient would work too, he said.

He recalled how “I got so much pushback” when trying to develop an open shop program, but you can work with shops outside a DRP just as simply as inside one.

“I think that’s a great way to do business,” he said.

Let the certified shop write the appraisal and add in a little oversight, and an insurer can be “very, very efficient” and take care of the customer well.

Avery (Avery Knows, retired from State Farm) asked if over time, a marketplace with multiple certified shops could lead to an insurer taking advantage of them competing on price.

Spears said a “bully-type carrier” could take advantage of anything, but they could also focus on the customer and look at variables like the highest quality, service or cycle time performance.

Approaching a repair with accuracy, service and speed meant “your expenses will be lower” and indemnity gains accuracy because actuaries know how much repairs are really going to cost.

Otherwise, a situation can arise where “indemnity creeps up on you” — he gave the example of an insurer constantly towing cars — because the insurer doesn’t know the business or doesn’t trust its network.

“I really believe in the speed of trust,” Spears said.

Have shops compete in the right ways and not simply use price, Spears said. He called price a “poor, poor lever” and observed that having it as one’s only tool made for a “weak negotiator.”

“This is what the connected car is going to do to the insurance carriers. So now with the OEM having the relationship with the customer, which is not the insurance company, they have their shop network already built out. They will know when these cars get into an accident and in about one second after it happens, probably faster, and they will be able to reach out to the customer – their customer driving their car – and say ‘Hey, this is a very special type of car. It requires certain shops to re-calibrate it after an accident. Here is a list of shops in your area. Can we send out a truck and let these shops work on it and then we will inform your carrier for you?’ The power of an insurance company is actually within first notice of loss. Who owns that generally owns what happens during the claims process. That first notice of loss is going to be shifted back to the OEMs. This is just really going to take away the negotiating power of the insurance carrier with the automotive manufacturer and also all of these shop networks that they have set up.”

“OEMs Muscling In: The Battle for FNOL”

Featured image: Insurance experts suggested that carriers would have more success embracing OEMs in the loss process than fighting them for the customer. (ojogabonitoo/iStock)